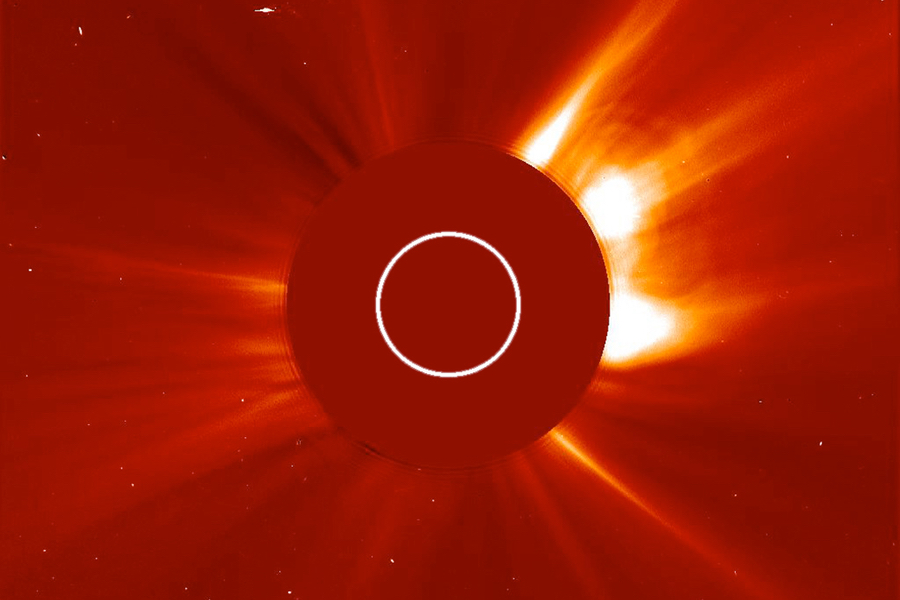 Astronomers from Leiden University (the Netherlands) and the University of Arizona (USA) have successfully commissioned a new type of optic that can reveal the image of an exoplanet next to its parent star. The ‘vector Apodizing Phase Plate’ (vector-APP) coronagraph was installed at the 6.5-m Magellan Clay telescope in Chile in May 2015, and the first observations demonstrated an unprecedented contrast performance very close to the star, where planets are more likely to reside. These results will be presented by PhD student Gilles Otten (Leiden) this Monday afternoon to the scientific community at the “In the Spirit of Lyot” conference held in Montreal at the Marriott Chateau Champlain Hotel.

Almost 2000 exoplanets have been detected to date, but only a handful of those have been imaged directly. Exoplanets are typically more than a million times fainter than and are lost in the glare of their parent star as seen from Earth. To directly image exoplanets and to characterize their atmospheres, astronomical instruments at the world’s largest telescopes use coronagraphs to suppress the overwhelming halo of light from the star.

The vector-APP coronagraph[1] uses the wavelike nature of light to cancel out the starlight whilst allowing the planet’s light to shine through.

This manipulation is implemented through a complex phase pattern that can only be manufactured using advanced liquid crystal 3D patterning techniques [2]. This technique creates two images of the star, for which dark D-shaped regions are located on opposite sides of each star image (see Figure 1). In this way, the whole region around the star can be scrutinized for planets. By combining several layers of liquid crystals, the device can be used over a wide range of wavelengths, including the infrared where the contrast between planet and star is more favorable. 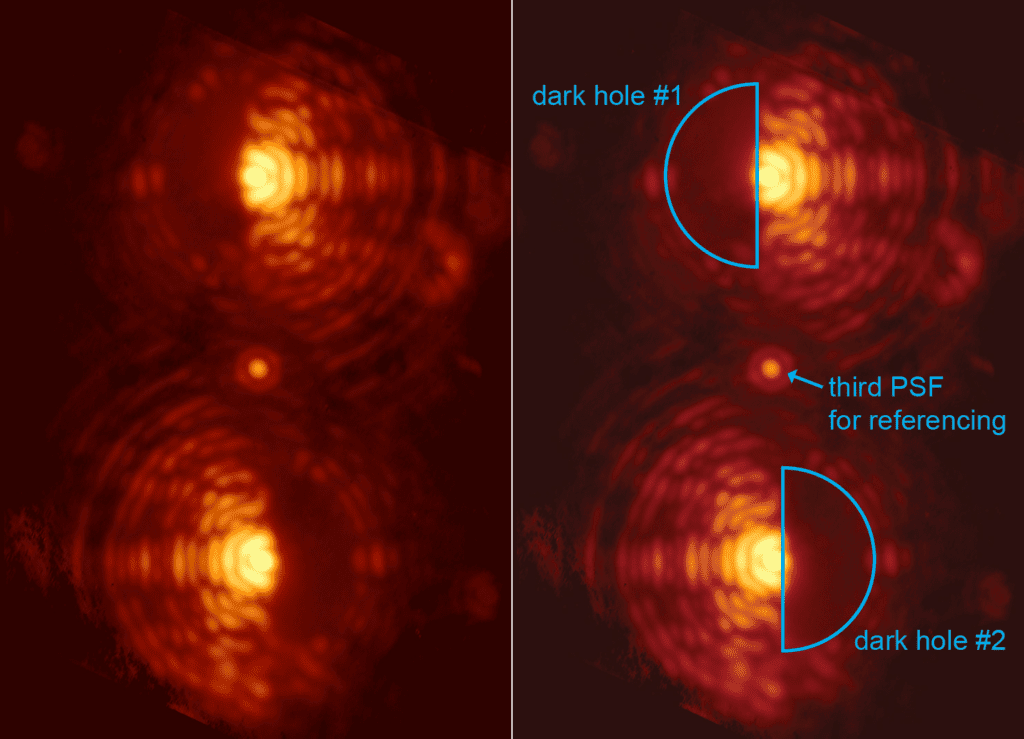 On May 6, 2015 a vector-APP coronagraphic device saw first light (at 3.9 µm wavelength, in the infrared range of the spectrum) at the MagAO[3] instrument, attached to the 6.5-m diameter Magellan Clay telescope in Chile. The telescope’s integrated adaptive optics system provided the instrument with sharp images of stars, which were consequently split up and modified by the coronagraph to exhibit dark holes in which much fainter planets could be imaged than without the vector-APP coronagraph.

“ It is fantastic to see that after all our design work and lab testing, this new approach works perfectly at the telescope on the very first night!”

“We knew that we were in business as soon as we saw the first picture on the screen in the telescope control room.”

Jared Males (NASA Sagan Fellow, University of Arizona) is excited about the opportunities of the vector-APP:

“ With this new coronagraph we are now looking for planets around nearby stars. We have the capacity to directly detect, or rule out, planets smaller than Jupiter.”

“ This new coronagraph technology is also excellent news for the extremely large telescopes currently under construction. Thermal infrared instruments such as the Mid-infrared E-ELT Imager and Spectrograph (METIS) can exploit this new technology and discover new worlds. With a vector-APP coronagraph in the next generation of telescopes, we can search for planets around nearby stars with unprecedented sensitivity.”

The advanced liquid crystal technology that the team adopted also permitted the production of extreme vector-APP designs that are not possible with more traditional manufacturing technologies. These new designs produce dark holes that cover the full 360 degrees around the target stars. The first data from an experimental device already shows the viability of this novel approach (see Figure 2). 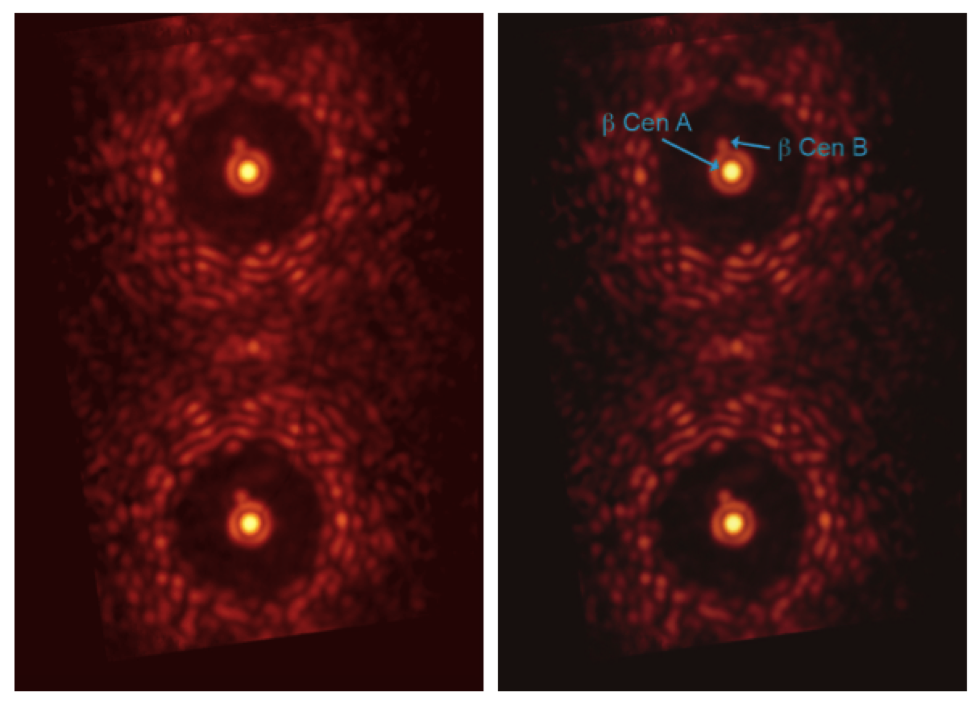 Double image of the star beta Centauri taken through an experimental version of the vector-APP coronagraph installed at MagAO. Both images of the star contain a dark region that covers the complete 360 degrees around the central star. In both cases, the binary companion to beta Centauri is easily detected. (Credit Leiden University/University of Arizona)

Support from the William F. and Elizabeth Lucas Junior Faculty Astronomy Award and the NASA Origins of Solar Systems program made this exciting commissioning possible at the MagAO instrument in Chile. This work was performed in part under contract with the California Institute of Technology (Caltech) funded by NASA through the Sagan Fellowship Program executed by the NASA Exoplanet Science Institute.

[1] For an introduction to the principles behind the vector-APP coronagraph, see Snik et al. (2012; http://adsabs.harvard.edu/abs/2012SPIE.8450E..0MS) and Otten el al. (2014; https://www.osapublishing.org/oe/abstract.cfm?uri=oe-22-24-30287). The name “vector-APP” stems from “Apodizing Phase Plate” based on polarization (vector) techniques. The original optical theory was developed by Johanan Codona at the University of Arizona.

[2] The vector-APP coronagraph devices for MagAO were developed in collaboration with the group of Dr. Michael Escuti at North Carolina State University, and were produced by ImagineOptix.

About the “In the Spirit of Lyot” Conference

In the last 20 years, the field of exoplanet studies rapidly evolved to become one of the most active in astronomy. Nearly 2000 planets have now been identified outside of our solar system. The search for and study of these objects occupy a sizeable fraction of observing time on large facilities worldwide, often using instruments built mainly or exclusively for that purpose. In addition, many ambitious new ground- and space-based projects are currently being developed to push the limits even further.

This research field relies on several complementary observational techniques, with indirect studies using radial velocity or photometric monitoring of the stellar hosts being responsible for the vast majority of the data collected so far. But today, after years of developments and the start of operation of a new generation of high contrast “planet finders”, direct imaging is emerging as another major contributor to this exciting enterprise. This method will help to develop a more complete picture of the full diversity of exoplanet systems, by exploring longer orbital periods. Direct imaging also provides a unique means to obtain information about the atmospheric properties of young gas giants. The few direct imaging detections accomplished thus far give only a small glimpse of the breakthroughs that are expected in the few years to come.

This conference will be focused on the direct detection and characterization of exoplanets and circumstellar disks.

Link to the web site of the conference: http://craq-astro.ca/lyot2015/

Inventor of the coronagraph, Bernard Lyot was a pioneer in the field of high contrast imaging and many of the techniques used today for disks and exoplanets imaging derive from his coronagraph concept. In addition to his instrumentation work, Lyot really focused his activities on scientific research and he made many important discoveries, such as the first detection of spectral lines in the solar corona — which he made using his coronagraph. Thus, Bernard Lyot symbolises the synergy between technical innovation and science breakthroughs that is inherent to our field of research.