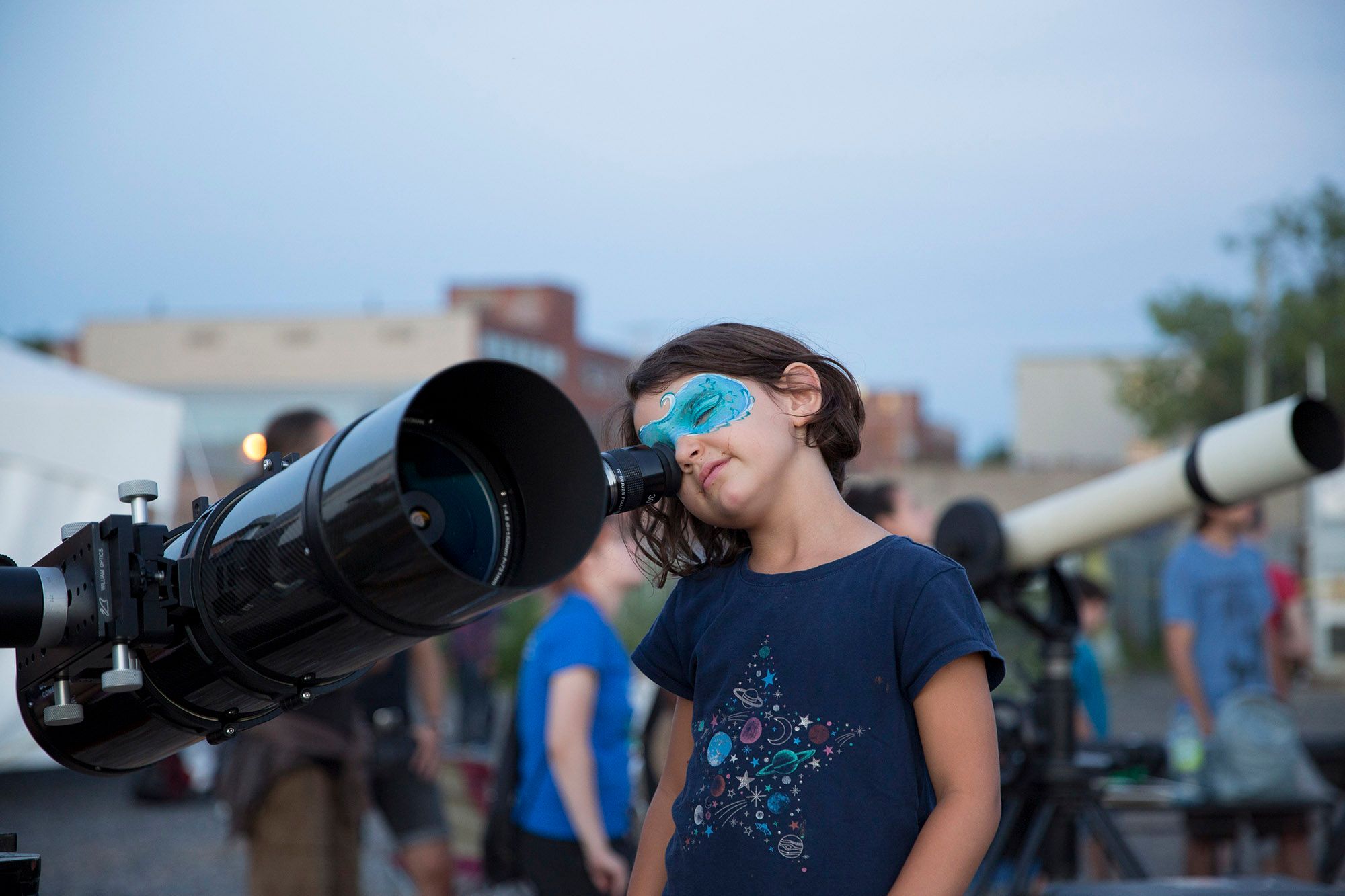 An image of a child looking through a telescope at the 2018 astroMIL event. (Credit: M. Boyce)

A major astronomy festival is organized every year at the Université de Montréal’s MIL Campus by the Trottier Institute for Research on Exoplanets. Celebrating different astronomical events or themes, this day brings together many important players in the fields of astronomy and astrophysics, space exploration, science popularization and more from Montreal, Quebec and beyond. 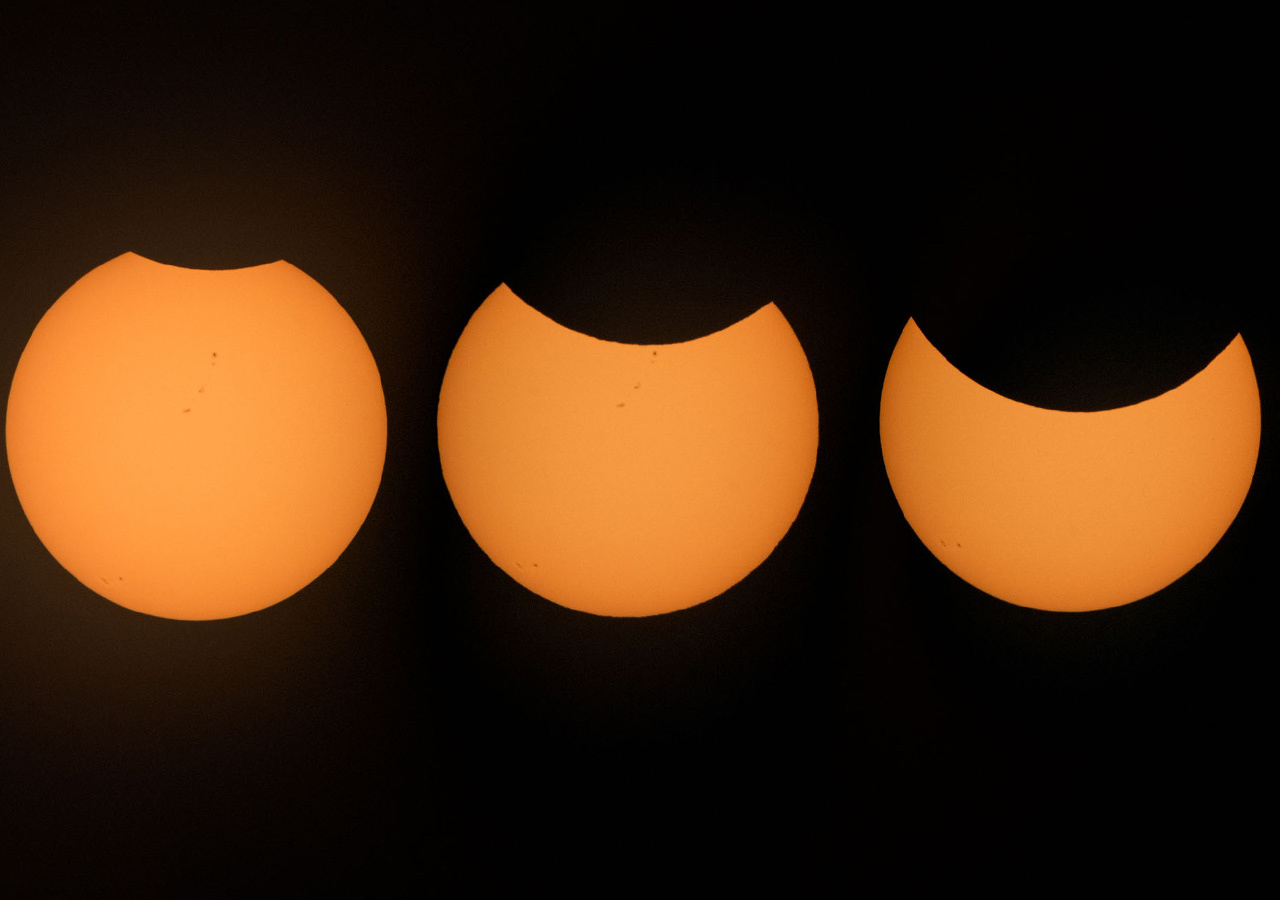 A series of images of the Sun taken during the August 21, 2017 solar eclipse. (Credit: N. Moran/NASA)

Keep your eyes open (and well protected) for more details about the 2023 edition of astroMIL!

During this event, which usually takes place during the Perseids meteor shower in early August, conferences and activities with a different space-related theme each year are presented. 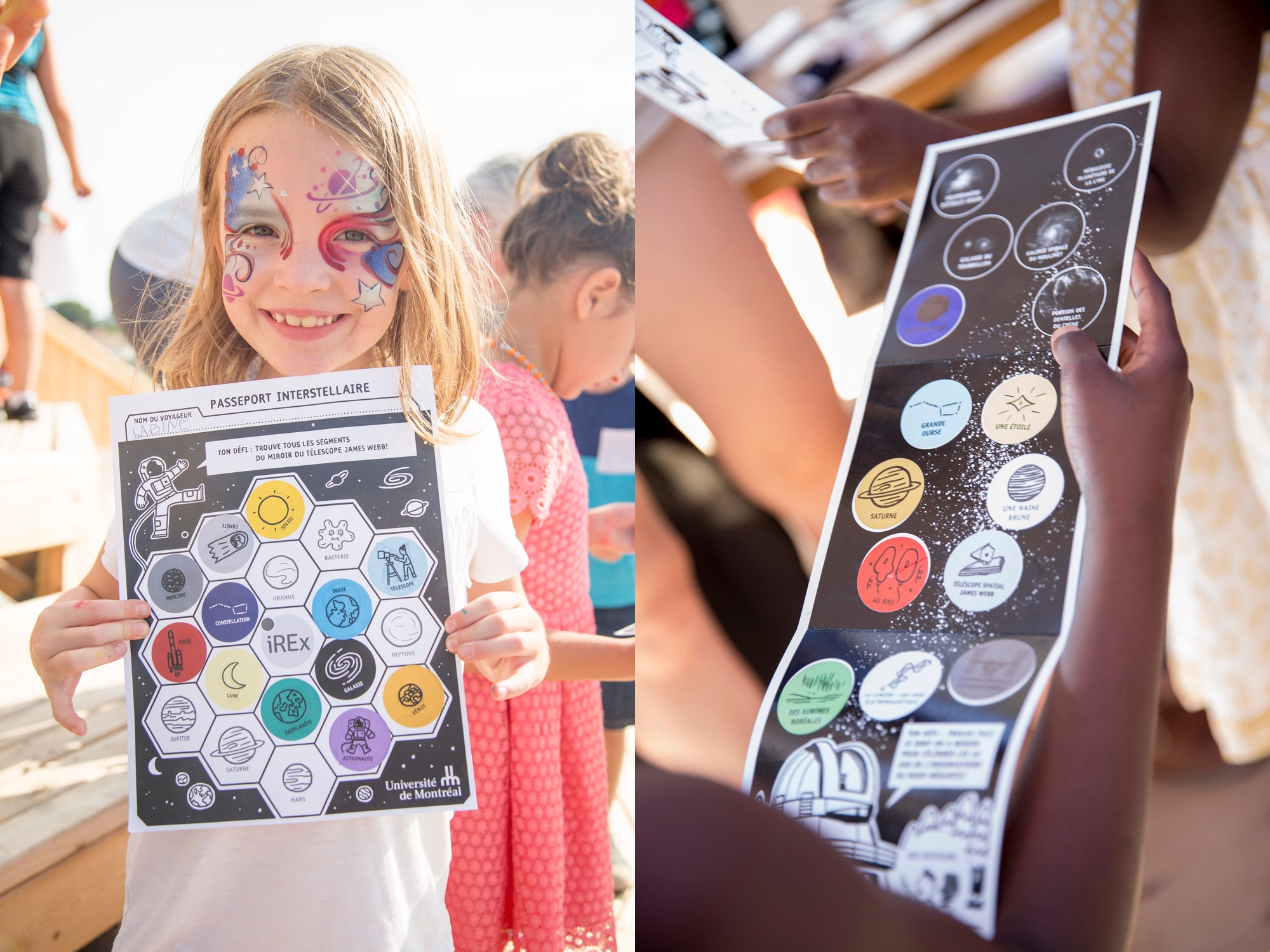 The first two editions of the astroMIL event took place during the peak of the Perseids meteor shower in August at the Université de Montréal’s “Projets éphémères”. Exoplanets were in the spotlight in 2017 with the theme “Voyage vers les nouveaux mondes” The 2018 edition, which coincided with the 40th anniversary of the Observatoire du Mont-Mégantic, was centred around “Un œil québécois sur l’Univers“. 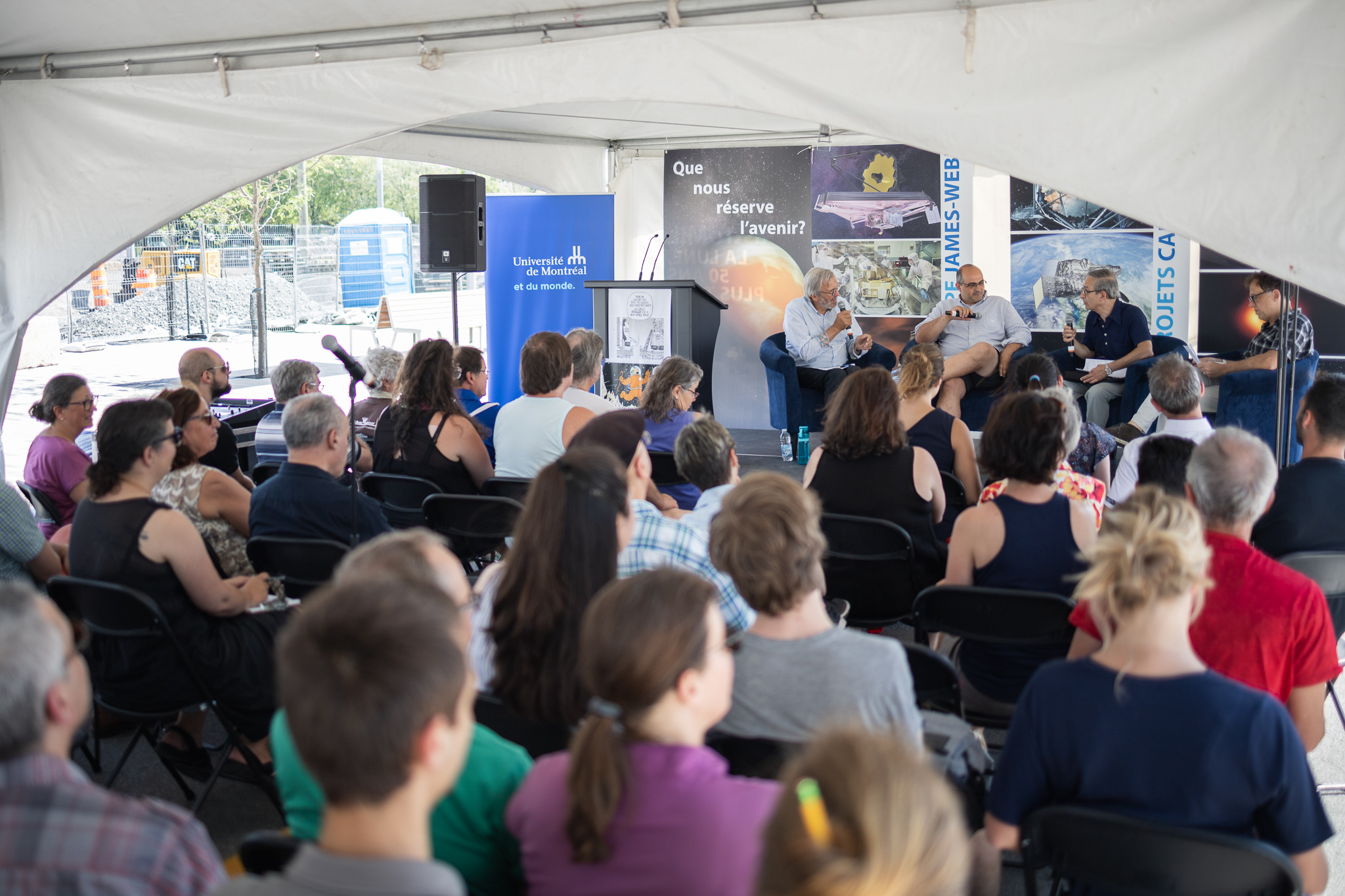 A panel on the scientific and sociocultural impact of lunar exploration at the 2019 astroMIL. (Credit: B. Seropian/UdeM)

The 2019 astroMIL was moved to July 21st to celebrate the 50th anniversary of the Apollo 11 mission with the theme “La Lune, 50 ans plus tard“. The newly built MIL campus welcomed our guests for the first portion of the day which included booths, virtual reality activities and mini-conferences. The day concluded with a screening of the movie First Man, based on the life of the first man on the moon, Neil Armstrong, and nighttime observations. 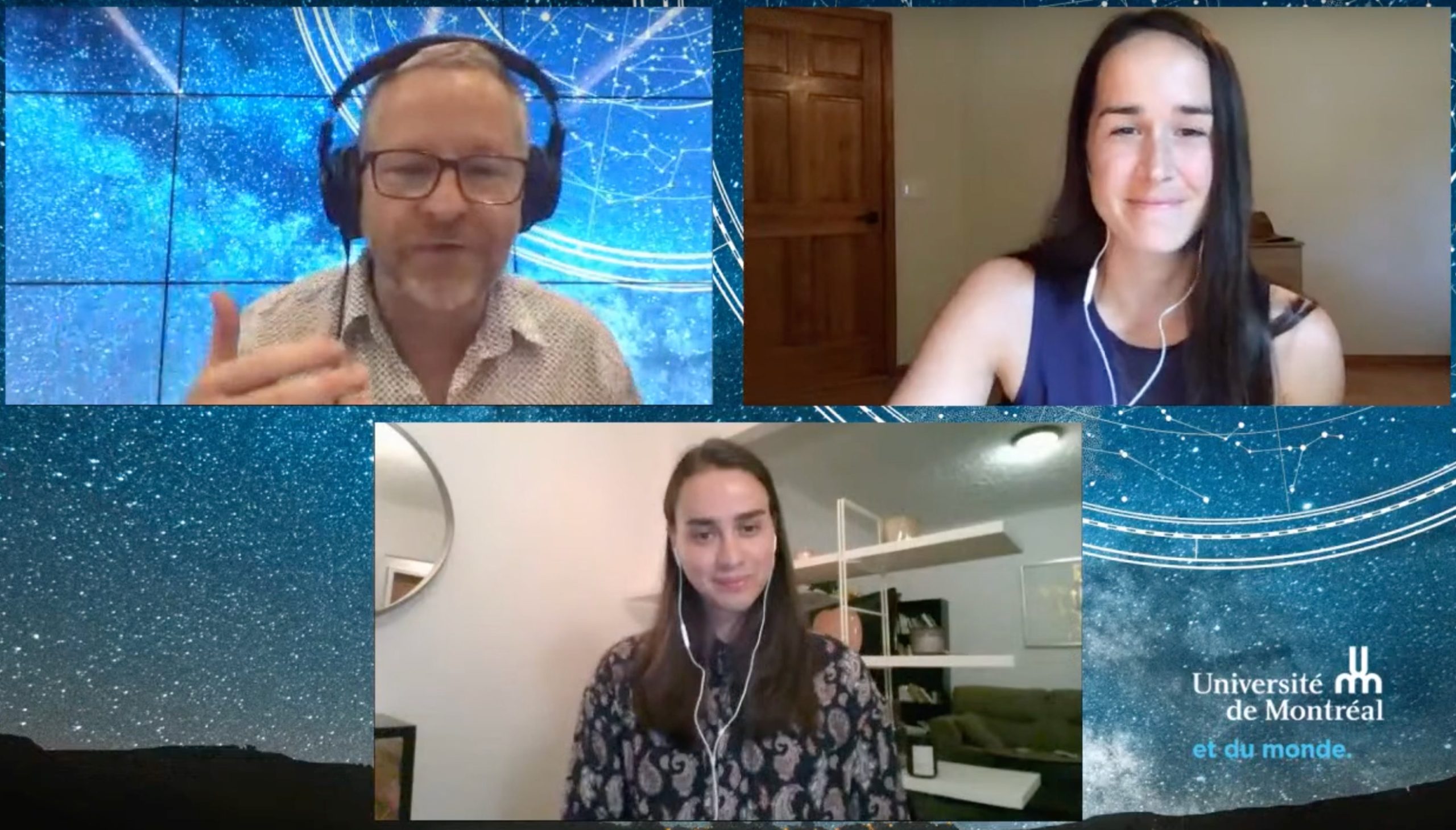 A screenshot of the 2020 astroMIL virtual event. The evening was hosted by André Robitaille (top left) with speakers such as astronomer Laurie Rousseau-Nepton (top right) and Samuel Rainville, UdeM Senior Advisor for First Peoples Relations (bottom).

In 2020, the event was moved online due to pandemic sanitary measures. In order to capitalise on the unifying and inspiring effect of astronomy, the theme was “Unis sous le même ciel“. In addition to astrophysics, the topics of eco-responsibility, sustainability and Indigenous knowledge were addressed. After a virtual talk, participants were invited to go outside to observe the Perseids with the help of two of our astrophysicists via a podcast episode. 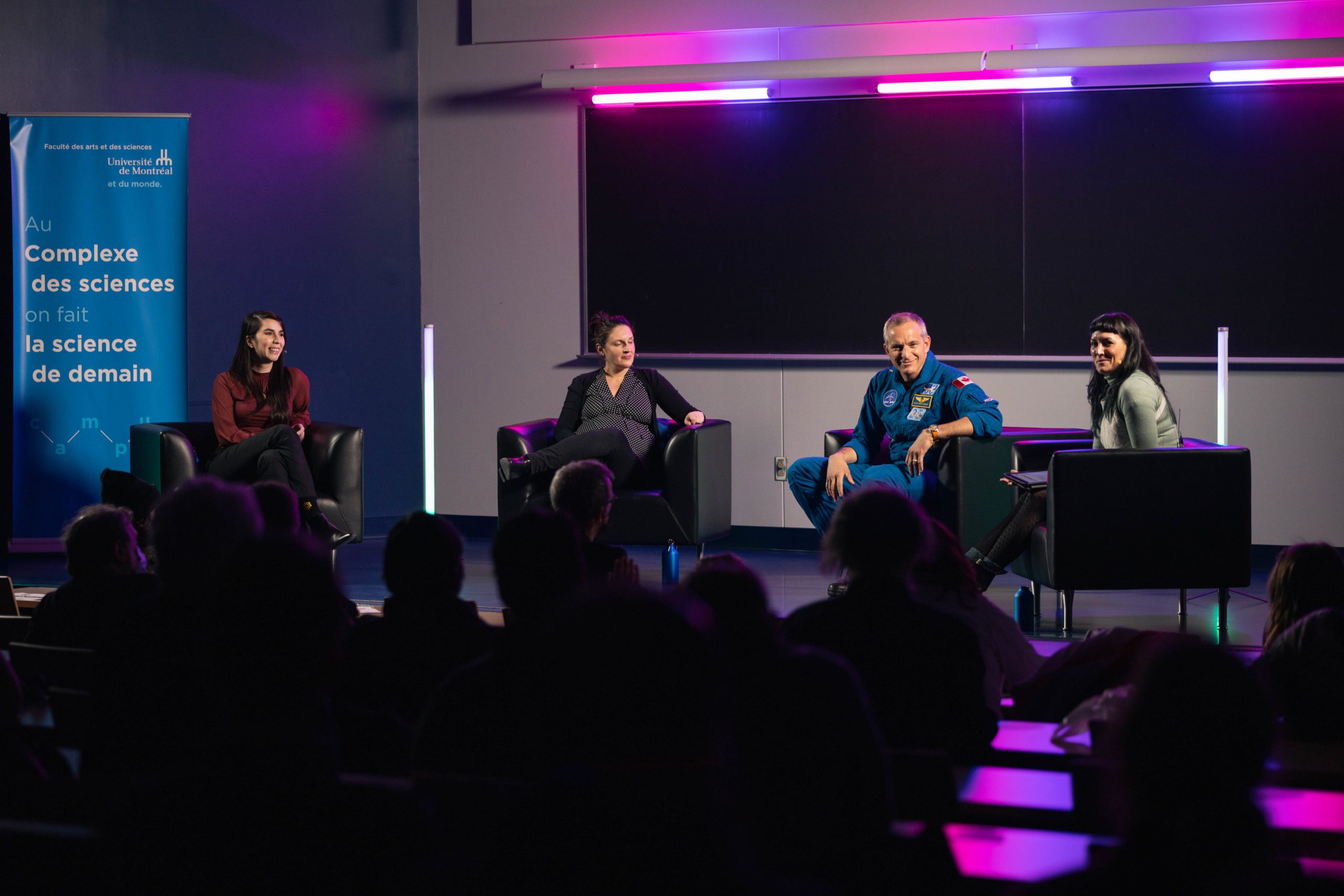 The panel on “The Future of Space Exploration” at the 2021 astroMIL featured (from left to right) astrophysicist Nathalie Ouellette, geomatician Myriam Lemelin, astronaut David St-Jacques, and science journalist Marianne Desautels-Marissal. (Credit: B. Seropian/UdeM)

The Geminids shooting star shower replaced the Perseids for the 2021 astroMIL event in December. The theme “Le futur de l’exploration spatiale” was explored in a panel discussion featuring astronaut David St-Jacques, geomatician Myriam Lemelin and our own Deputy Director, astrophysicist Nathalie Ouellette. During this hybrid event, the public was able to learn more about the James Webb Space Telescope, future lunar missions and the life of an astronaut, as well as ask questions to our speakers.

The astroMIL event took a short break in 2022 so that our team could focus on the array of activities surrounding the launch and start of operations of the James Webb Space Telescope.