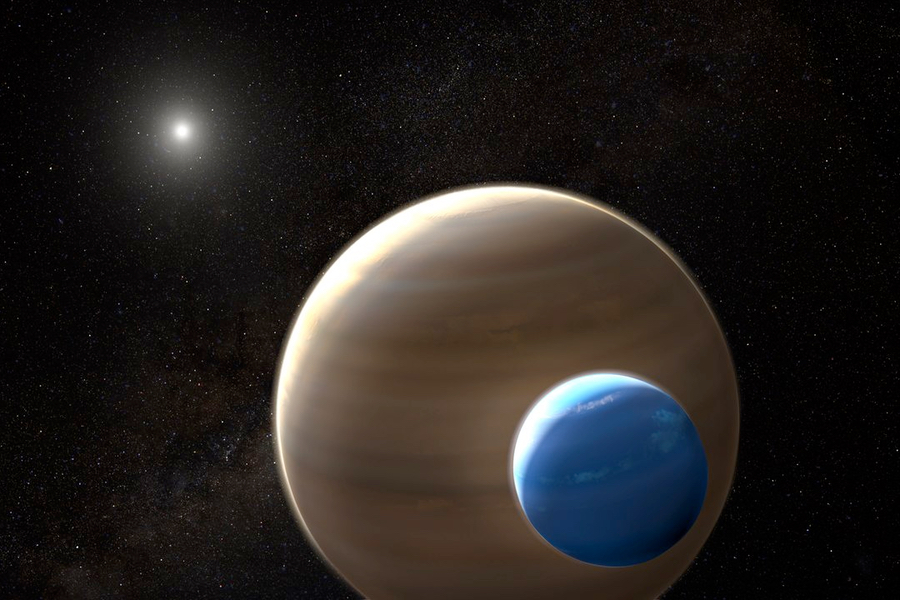 Detecting an exoplanet is often described as trying to spot a firefly passing in front of a lighthouse beam from hundreds of kilometres away. Astronomers are now on the cusp of being able to detect an even smaller fly orbiting that firefly, or rather an exomoon orbiting an exoplanet in transit in front of their host star. In early October 2018, an international team lead by Columbia University astronomers announced the detection of the first ever exomoon candidate in the journal Science Advances.

Astronomers can detect exoplanets by studying the variations in the brightness of their parent star as they eclipse it; this is called the transit method. Instruments and data analysis algorithms may now be sophisticated enough to resolve a moon-planet system transiting in front of a star. The exoplanetary system Kepler-1625 was first observed by the Kepler space telescope and was identified as a promising candidate for hosting an exomoon. A follow-up observation of one of its transits was taken on the Hubble Space Telescope in 2017 to validate the result.

In addition to a unique light curve signature, exomoons can be detected if the time of transit of a planet passing in front of its star does not occur at the expected moment. Moons can have an observable gravitational effect on the planets they orbit depending on their mass and location. An orbiting moon will tug on its planet which will in turn speed up or slow down along its own orbital path around the system’s star depending on whether its moon is ahead or behind it. This causes variations in the time at which the planet transits the star: transit timing variations (TTVs). During the Hubble observation, the exoplanet Kepler-1625b was found to transit in front of its star 77.8 minutes earlier than expected which further convinced the team that an exomoon, Kepler-1625bi, may be present.

One remarkable characteristic of this proposed planet-moon system is the size of the objects in question. The planet appears to be a few times more massive than Jupiter while the moon may be as large as Neptune. This is a far cry from the moons observed in our own Solar System that tend to be drastically smaller than the planets they orbit. If the exomoon candidate is indeed a large gaseous body akin to one of our own gas giant planets, it may help us understand the different formation scenarios of moons a little better.

While the authors of the paper are optimistic that this exomoon candidate may be the real deal, they caution that more data is needed to solidify their findings. Indeed, multiple transits of Kepler-1625b will need to be observed to verify if the light curve and TTV signatures appear consistently. As the Transiting Exoplanet Survey Satellite (TESS) releases its first slew of data, we may yet see more of these possible exomoon candidates appear.