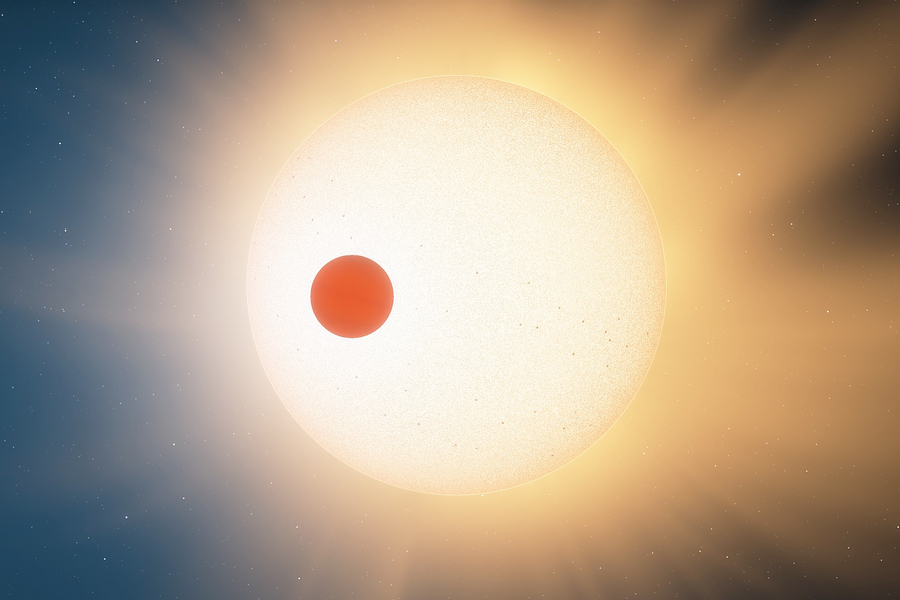 Artistic representation of LTT 9779 b transiting in front of its star. (Credit: E. Schmidt)

LTT 9779 b is an exoplanet the size of Neptune and very close to its star. It was discovered recently thanks to NASA’s Transiting Exoplanet Survey Satellite (TESS) space telescope. Two iREx researchers, Professors Björn Benneke of the Université de Montréal and Nicolas Cowan of McGill University, contributed to two studies describing the characteristics of LTT 9779 b using data from the now-retired Spitzer Space Telescope. They answer our questions on these studies and this surprising exoplanet here. 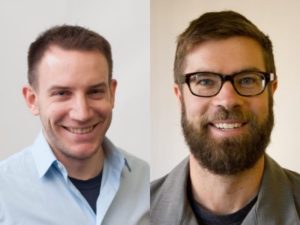 iREx: Before the studies you participated in, what did we know about this planet?

Nicolas: This planet was detected very recently. Its discovery was only announced last month! It was detected using the transit method, which allows to discover planets by measuring the decrease in intensity of a star that occurs periodically when it passes in front of it. We thus knew its size, about 4.6 times the size of the Earth (vs. 3.9 times for Neptune). Additional observations on the ground allowed to confirm its existence and to measure its mass (29 times the mass of the Earth), thanks to the radial velocity method.

iREx: Why did you choose to study this exoplanet?

Björn: Neptune-size planets like LTT 9779 b are extremely common in the Universe. What makes this planet special is that it orbits around its star in a little less than a day. The Kepler mission found that planets this size are very rare this close to their host star (with small orbital periods). That’s what we call the “hot Neptune desert”.

Understanding the atmosphere of this planet is therefore crucial to understanding why LTT 9779 b can exist there, while almost no other hot Neptunes exist.

NASA’s Spitzer Telescope operates in a wavelength range where these planets are brighter (the infrared). By combining data obtained with this telescope with TESS observations, we were able to learn more about LTT 9779 b’s atmosphere.

iREx: Tell us about the observations you made with Spitzer.

Björn: We were able to observe the secondary eclipse of the planet in the infrared with Spitzer. During such an eclipse, the combined luminosity of the star and the planet decreases because the planet passes behind its star.

This video shows the secondary eclipse of LTT 9779 b. A secondary eclipse occurs when a planet passes behind its star, causing a decrease in the total brightness received from the system. Credit: Ian Crossfield and Ethen Schmidt.

Nick: As an exoplanet orbits its host star, we alternately see its hot dayside illuminated by the star and its cooler nightside. For LTT 9779 b, we have been able to study this phase curve, the periodical rise and fall of the thermal emission we receive from the planet as it goes through its orbital phases.

This video shows the phase curve of LTT 9779 b. The amount of light we receive from the system (the flux) varies as the planet moves around the star. Credit: Ian Crossfield and Ethen Schmidt.

By studying the phase variations of an exoplanet we learn how it absorbs starlight and transports that energy via winds. We have measured such orbital phase variations for a couple dozen exoplanets, nearly all the size of Jupiter and which therefore have atmospheres made up almost entirely of hydrogen and helium.

iREx: What did your observations reveal?

Björn: This is the first time that we have discovered the thermal light emitted by a “hot Neptune”, a Neptune-like planet very close to its star.

By comparing these observations of the secondary eclipse with theoretical models, we obtained information about the composition of its atmosphere. In particular, we detected carbon monoxide in its atmosphere!

Comparing the observations made with TESS and Spitzer (black dots) to theoretical models (in gray, red and blue) allows scientists to conclude that there is most likely carbon monoxide in the atmosphere of LTT 9779 b. (Credit: Dragomir et al. 2020)

Nick: The planet is much cooler than we expected, which suggests that it is reflecting away much of the incident starlight that hits it, presumably due to dayside clouds. The planet also doesn’t transport much heat to its nightside, but we think we understand that: the starlight that is absorbed is likely absorbed high in the atmosphere and then quickly radiated back into space. 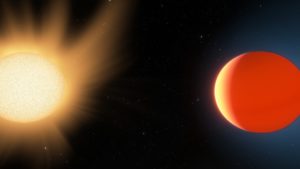 This artist’s impression shows LTT 9779 b near the star it orbits and highlights the planet’s ultra-hot dayside and its quite toasty nightside. (Credit: E. Schmidt)

iREx: What is your contribution to this project?

Björn: Together with my colleagues Diana Dragomir (University of New Mexico) and Ian Crossfield (University of Kansas), we requested a large amount of observing time (550 hours) on the Spitzer Space Telescope to study planets detected by TESS. LTT 9779 b is the first exoplanet observed from this program.

Nick: This project is the result of a huge collaborative effort that involved dozens of people! On my end, I helped in the analysis and interpretation of the phase curve measurements.  I have a lot of experience with Spitzer phase curves, having led or contributed to nearly all published studies about them. It was a joy to not have to do the data reduction myself (it is a messy and often unpleasant process) and instead I got to spitball possible explanations for the measurements.

iREx: What surprises or difficulties did you encounter during this project?

Björn: When Ian and I analysed the first observations, we found that the thermal emission of the planet was so intense that it was possible for us to observe its entire phase curve, a much more difficult observation. This led to the second study, to which Nick contributed.

Nick: But it was a difficult observation! The Spitzer Space Telescope was not designed to study the atmospheres of exoplanets, so we had to push the instruments way beyond its specifications. This requires heroic data reduction and analysis, usually involving many software pipelines developed by different teams.

Björn: Thanks to our observations with Spitzer, we now know precisely when the eclipse occurs, which is essential for planning observations with JWST. This telescope will allow us to obtain a much more detailed phase curve in several wavelengths, thanks to the Canadian instrument NIRISS.

Nick: With this powerful telescope, we will be able to robustly measure the planet’s atmospheric composition and study its clouds.

iREx: Why is the study of this exoplanet of interest to non-experts?

Nick: We all wonder if there’s life elsewhere in the Universe. If we’re ever going to discover definitive proof of life on an exoplanet, we will need to have a very good understanding of all the physical, chemical, and geological processes that occur on these alien worlds. In other words, we need to study countless diverse examples of non-living planets in order to have any hope of recognising living planets.

Another important aspect is that studying the climate of other planets, even exotic worlds like LTT 9779 b, helps us refine our understanding of planetary climates and hence better understand the past, present and future climate of Earth.

Note: This interview has been edited for clarity.

This video was created by professor James Jenkins (Universidad de Chile) to explain the two studies.

The article “Spitzer Reveals Evidence of Molecular Absorption in the Atmosphere of the Hot Neptune LTT 9779 b” was published by Diana Dragomir, Ian Crossfield, Björn Benneke et al.  in The Astrophysical Journal Letters and supported in part by NASA through a Caltech/Jet Propulsion Laboratory (JPL) grant.