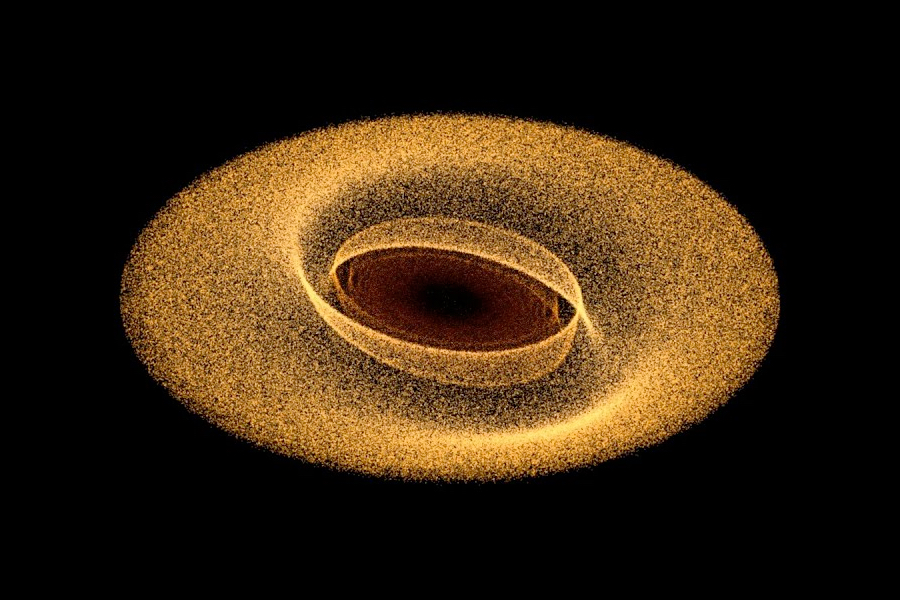 A simulation of waves in a debris disc caused by an exoplanet. (Credit: NASA GSFC)

A new supercomputer simulation of the planet and debris disk around the nearby star Beta Pictoris reveals that the planet’s motion drives spiral waves throughout the disk, a phenomenon that greatly enhances collisions among the orbiting debris. Patterns in the collisions and the resulting dust appear to account for many observed features that previous research has been unable to fully explain. The findings will be presented Thursday by Erika Nesvold, an astrophysicist at the University of Maryland, Baltimore County who co-developed the simulation with her colleague Marc Kuchner, an astrophysicist at NASA’s Goddard Space Flight Center in Greenbelt, Maryland. These results will be presented during the afternoon to the scientific community at the “In the Spirit of Lyot” conference held in Montreal at the Marriott Chateau Champlain Hotel, which focuses on the direct detection of planets and disks around distant stars. A paper describing the research has been submitted to The Astrophysical Journal.

“We essentially created a virtual Beta Pictoris in the computer and watched it evolve over millions of years,” said Nesvold. “This is the first full 3-D model of a debris disk where we can watch the development of asymmetric features formed by planets, like warps and eccentric rings, and also track collisions among the particles at the same time.”

Located only 63 light-years away, Beta Pictoris is an estimated 21 million years old, or less than 1 percent the age of our solar system, and offers astronomers a front-row seat to the evolution of a young planetary system. In 1984 Beta Pictoris became the second star known to be surrounded by a bright disk of dust and debris, and it remains one of the closest, youngest and best-studied examples today. The disk, which we see edge on, contains rock and ice fragments ranging in size from objects larger than houses to grains as small as smoke particles. It’s a younger version of the Kuiper belt at the fringes of our own planetary system.

In 2009, astronomers confirmed the existence of Beta Pictoris b, a planet with an estimated mass about nine times Jupiter’s. Traveling along a tilted and slightly elongated 20-year orbit, the planet stays about as far away from its star as Saturn does from our sun.

Astronomers have struggled to tie together various features seen in the disk, including a warp apparent at submillimeter wavelengths, an X-shaped pattern visible in scattered light, and vast clumps of carbon monoxide gas. A common ingredient in comets, carbon monoxide is quickly destroyed by ultraviolet starlight. To explain its presence, previous researchers suggested the clumps could be evidence of icy debris being corralled by a second as-yet-unseen planet, resulting in an unusually high number of collisions. Or perhaps the gas was the aftermath of an extraordinary crash of icy worlds as large as Mars.

“Our simulation suggests many of these features can be readily explained by a pair of colliding spiral waves excited in the disk by the motion and gravity of Beta Pictoris b,” Kuchner said. “Much like someone doing a cannonball in a swimming pool, the planet drove huge changes in the debris disk once it reached its present orbit.”

Keeping tabs on thousands of fragmenting particles over millions of years is a computationally difficult problem. Existing models either weren’t stable over a sufficiently long time or contained approximations that could mask some of the structure Nesvold and Kuchner were looking for.

Working with Margaret Pan and Hanno Rein, both now at the University of Toronto , they developed a method where each particle in the simulation represents a cluster of bodies with a range of sizes and similar motions. By tracking how these “superparticles” interact, they could see how collisions among trillions of fragments produce dust and, combined with other forces in the disk, shape it into the kinds of patterns seen by telescopes. The technique, called the Superparticle-Method Algorithm for Collisions in Kuiper belts (SMACK), also greatly reduces the time required to run such a complex computation.

Using the Discover supercomputer operated by the NASA Center for Climate Simulation at Goddard, the SMACK-driven Beta Pictoris model ran for 11 days and tracked the evolution of 100,000 superparticles over the lifetime of the disk. 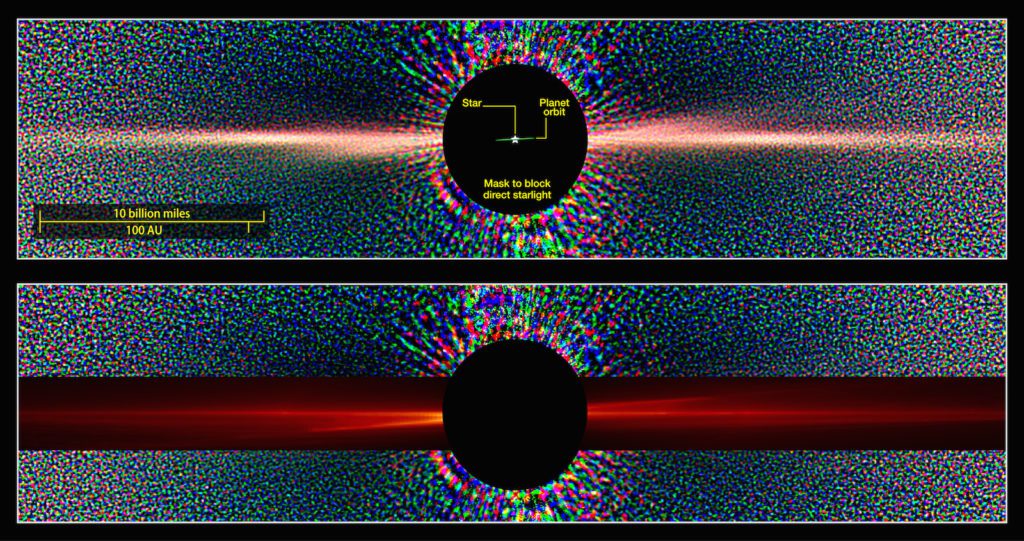 These images compare a view of Beta Pictoris in scattered light as seen by the Hubble Space Telescope (top) with a similar view constructed from data in the SMACK simulation (red overlay, bottom). The X pattern in the Hubble image forms as a result of a faint secondary dust disk inclined to the main debris disk. Previous simulations were unable to reproduce this feature, but the SMACK model replicates the overall pattern because it captures the three-dimensional distribution of the collisions responsible for making the dust. Image credit: Top, NASA/ESA and D. Golimowski (Johns Hopkins Univ.); bottom, NASA Goddard/E. Nesvold and M. Kuchner

The planet’s orbit also is slightly eccentric (fig. 2), which means its distance from the star varies a little every orbit. This motion stirs up the debris and drives a second spiral wave across the face of the disk. This wave increases collisions in the inner regions of the disk, which removes larger fragments by grinding them away. In the real disk, astronomers report a similar clearing out of large debris close to the star. 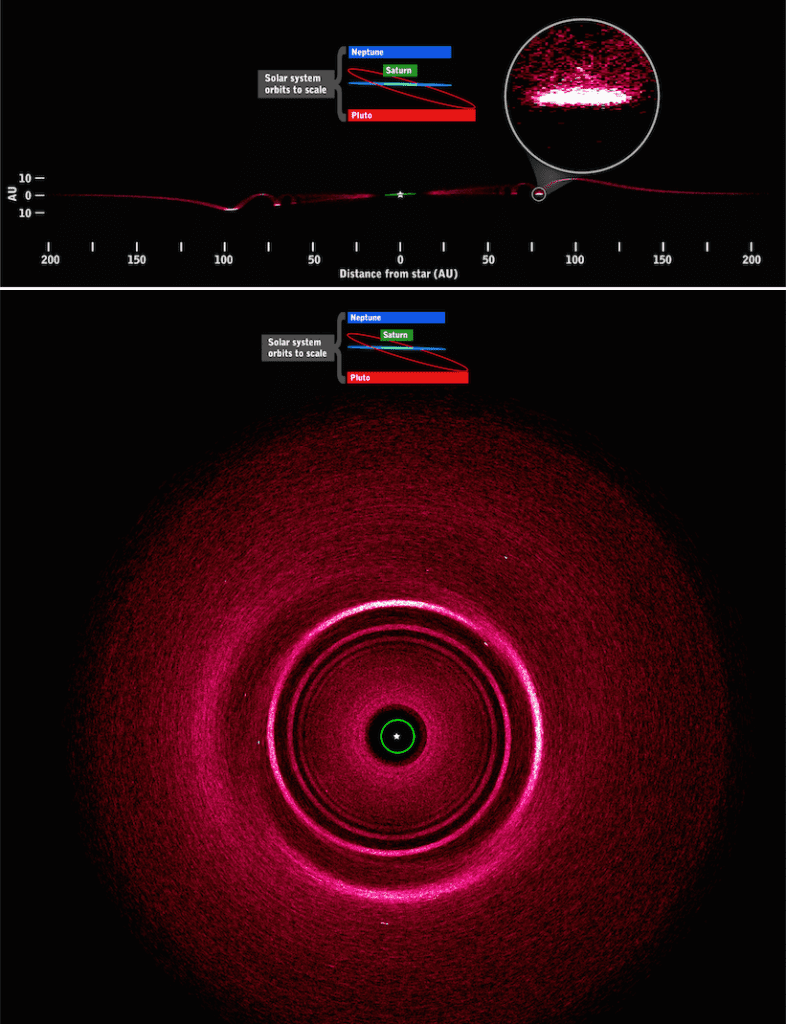 A single planet creates a variety of structures in the Beta Pictoris disk, including an asymmetric pattern of collisions that could explain the clump of carbon monoxide seen by ALMA. These maps show where the planetesimal collisions are occurring most often in the disk: in the peaks and troughs of the wave launched by the planet. (Credit: top, NASA/ESA/D. Golimowski/JHU); bottom, NASA Goddard/E. Nesvold/M. Kuchner)

“One of the nagging questions about Beta Pictoris is how the planet ended up in such an odd orbit,” Nesvold explained. “Our simulation suggests it arrived there about 10 million years ago, possibly after interacting with other planets orbiting the star that we haven’t detected yet.”

About the “In the Spirit of Lyot” Conference

In the last 20 years, the field of exoplanet studies rapidly evolved to become one of the most active in astronomy. Nearly 2000 planets have now been identified outside of our solar system. The search for and study of these objects occupy a sizeable fraction of observing time on large facilities worldwide, often using instruments built mainly or exclusively for that purpose. In addition, many ambitious new ground- and space-based projects are currently being developed to push the limits even further.

This research field relies on several complementary observational techniques, with indirect studies using radial velocity or photometric monitoring of the stellar hosts being responsible for the vast majority of the data collected so far. But today, after years of developments and the start of operation of a new generation of high contrast “planet finders”, direct imaging is emerging as another major contributor to this exciting enterprise. This method will help to develop a more complete picture of the full diversity of exoplanet systems, by exploring longer orbital periods. Direct imaging also provides a unique means to obtain information about the atmospheric properties of young gas giants. The few direct imaging detections accomplished thus far give only a small glimpse of the breakthroughs that are expected in the few years to come.

Inventor of the coronagraph, Bernard Lyot was a pioneer in the field of high contrast imaging and many of the techniques used today for disks and exoplanets imaging derive from his coronagraph concept. In addition to his instrumentation work, Lyot really focused his activities on scientific research and he made many important discoveries, such as the first detection of spectral lines in the solar corona — which he made using his coronagraph. Thus, Bernard Lyot symbolises the synergy between technical innovation and science breakthroughs that is inherent to our field of research.

Dr. Erika Nesvold (at the “Spirit of Lyot”) conference
University of Maryland
erika.r.nesvold@nasa.gov