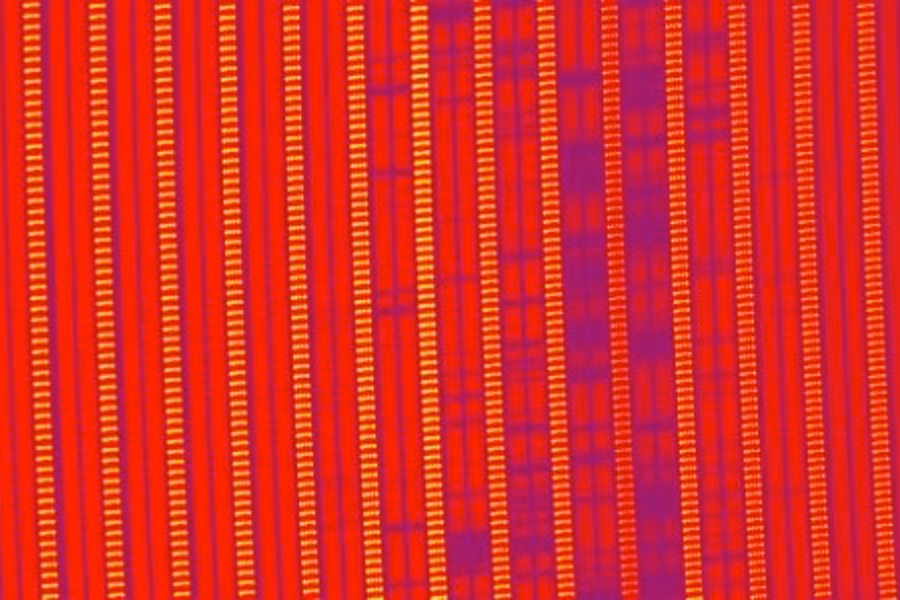 Portion of an image from the SPIRou detector during observations of AD Leo, an active red dwarf located 16 light years away (Credit: SPIRou Team)

After four months of hard work by engineers and scientists from France, Canada, Switzerland and Taiwan, and over a decade in the making, an important milestone has been reached for SPIRou, the Canada-France-Hawaii Telescope (CFHT)’s new planet-hunting spectropolarimeter. On April 24 around 7:50 pm Hawaii time, the instrument recorded, for the first time, light coming from a star. During the following few nights, SPIRou gathered an impressive collection of about 440 spectra of 24 stars, demonstrating several of its unique capabilities in the process.

SPIRou (SpectroPolarimètre InfraRouge) is a high-resolution spectropolarimeter and a high-precision velocimeter optimized for discovering Earth twins orbiting in the habitable zone of nearby red dwarf stars. During its first on-sky exercise, SPIRou observed stars cooler than the Sun, known as red dwarfs, a stellar population comprising most of the stars in the neighborhood of our Solar System. A total of 440 spectra of 24 stars were observed in the three clear nights of the observing run. 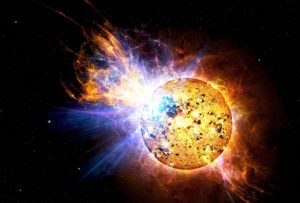 The first star observed with SPIRou was AD Leonis, a very active red dwarf located 16 light years from Earth in the constellation of Leo. SPIRou demonstrated its ability at detecting the strong magnetic field of this star. These first observations were made by Claire Moutou, resident astronomer at CFHT, with the assistance of the whole CFHT observing team, and were reduced and analysed by Jean-François Donati (IRAP/OMP, UPS, CNRS/ISU), the principal investigator of SPIRou.

An upcoming large program, the SPIRou Legacy Survey Planet Search, will exploit SPIRou to closely observe the closest red dwarfs looking for evidence of nearby planetary systems. “SPIRou is a unique and powerful instrument,” says René Doyon, project co-PI and director of the Observatoire du Mont-Mégantic (OMM) and professor at Université de Montréal. “At the Institute for Research on Exoplanets (iREx), we are all very excited about the fact that it will soon start to find the closest habitable worlds from the Earth, the ones we will be able to study in more detail with the James Webb Space Telescope.”

SPIRou uses a technique known as “velocimetry“, radial velocity measurements coupled with polarimetry in the infrared, to detect the tiny wiggle in a star indicating the presence of planets at very precise levels. “We anticipate the astronomy community will use SPIRou extensively in the upcoming decade,” says Donati. “SPIRou will play a key role in the coordinated exoplanet surveys to come involving multiple space-based missions like the recently launched TESS, and the James Webb Space Telescope, to be launched in 2020, and the European PLATO mission, planned for 2026.”

Before being packed, shipped and reassembled at CFHT in early 2018, SPIRou was integrated and intensively tested at the Institut de Recherche en Astrophysique et Planétologie at (IRAP)/Observatoire Midi-Pyrénées (OMP) (CNRS/INSU, UPS, Toulouse, France) in 2017. After being delivered at CFHT in January, SPIRou was installed at its new home location on the third floor of CFHT, and reassembled by engineers and specialists from IRAP / OMP (Toulouse, France), Observatoire de Haute Provence (St Michel, France), National Research Council Herzberg (Victoria, Canada), Observatoire du Mont-Mégantic and Université de Montréal (Montreal, Canada), with invaluable support from the whole CFHT team. 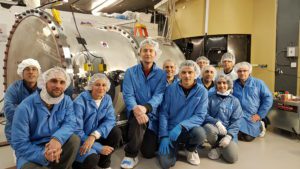 Most of the team of engineers from France, Canada, and CFHT, after closing up the SPIRou cryostat (behind them) for the first time in the CFHT coude room.

Since it operates in the infrared, SPIRou needs to be cryocooled to a temperature of 200°C below freezing. After cooling it down for initial testing, the instrument was warmed up to include its new detector, a Hawaii 4RG (H4RG) fabricated by Teledyne Imaging Systems. The detector was tested and assembled by Observatoire du Mont-Mégantic and Université de Montréal researchers and engineers in Montreal before being shipped to CFHT. “While the pixel count of the SPIRou H4RG is similar to that of consumer cameras, it is very different because it is sensible to a different kind of light, the infrared,” explains Doyon. “It is the largest detector for infrared light in the world, the first detector of its kind on Maunakea and possibly the only one in the world being used for astronomical research right now.”

Small portion of the SPIRou spectrum of the active red dwarf AD Leo as observed (w/ telluric lines, red) and once the telluric spectrum (green) is removed (blue). This illustrates how critical telluric subtraction is to properly identify which lines can give us some information about the observed star and the planets potentially orbiting it (©J.-F. Donati).

During the commissioning, SPIRou not only observed red dwarfs but also observed much hotter stars. “The atmosphere of the Earth ‘pollutes’ all observations that are taken on the ground, explains Étienne Artigau, an OMM/iREx researcher at Université de Montréal. “Observing hot stars allows us to measure the absorption from the Earth’s atmosphere and correct for it, which is key to accurate scientific measurements. Our team has been looking at a set of innovative techniques to do this correction and remove the effect of our atmosphere.”

After commissioning, SPIRou will start observations for the various projects it was designed for and constructed to accomplish. “A lot of work is still ahead for SPIRou, but we are encouraged by the results of the first commissioning run”, says CFHT’s director of science Daniel Devost. “A sincere congratulations to the entire SPIRou team for the work they have put into this outstanding instrument.”

René Doyon
Director of the Observatoire du Mont-Mégantic
Director of the Institute for research on exoplanets
Professor at Université de Montréal, Canada
doyon@ASTRO.UMontreal.CA