Towards a better understanding of the β Pictoris system 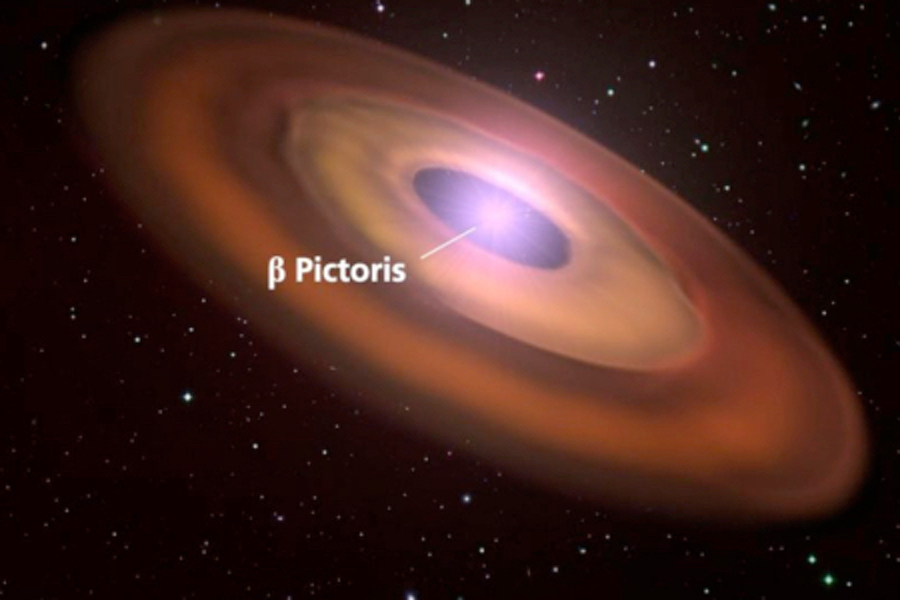 Recent work led by Thomas Vandal, an iREx master’s student at the Université de Montréal under the supervision of René Doyon, succeeded in constraining the physical characteristics of the planets around Beta Pictoris using a new statistical method.

Beta Pictoris is a star well known to astronomers. Located only 63 lightyears from the Sun, this star has a rich system consisting of a disk of gas and debris and at least two giant exoplanets. Beta Pictoris b, the more distant from its star of the two planets, was discovered in 2008 and was one of the first planets ever detected via the direct imaging method, which allows the planet to be photographed. The planet closest to the star, Beta Pictoris c, was discovered in 2019 via the method of velocimetry, which measures the movement of the star due to the gravitational force of all its planets.

Recently, the planet Beta Pictoris c was also directly imaged with the GRAVITY instrument installed on one of the European Southern Observatory’s telescopes in Chile. This is an impressive technological feat as it is very difficult to image a planet located so close to its star: Beta Pic c is only about three times as far from its star as the Earth is from the Sun.

Detecting Beta Pictoris b and c: quite a feat!

It is quite rare that, in a given system, one planet is discovered by direct imaging and another by velocimetry, and even rarer that the same planet is identified through both methods. Planets found using the direct method are typically Jupiter-like planets with much larger orbits (they are at distances from 2 to 400 times the distance between the Sun and Jupiter). To find them, we mainly study young stars that have warm and bright planets. In the case of the velocimetry method, we typically find planets that are much closer to their star because they then have a greater gravitational effect on it. This method is also more commonly used on older stars that are less active, which makes it easier to detect planets. 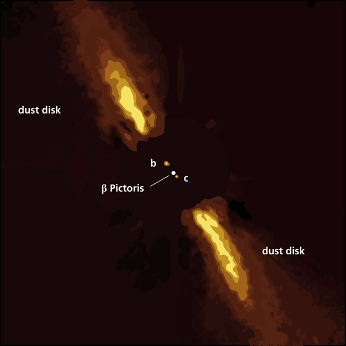 An artistic rendition of the two planets (b and c) and the disk of dust around the star Beta Pictoris. (Credit: GRAVITY Collaboration/A. M. Quetz/MPIA Graphics Department)

It is not the case for Beta Pictoris which is, at about 25 million years of age, a much younger star than the Sun. It is also a variable star whose pulsations make the detection of planets by the velocimetry method difficult. It is imperative to understand the star well so as to not confuse its pulsations with the signal of an orbiting planet.

A new method to constrain the physical characteristics of planets 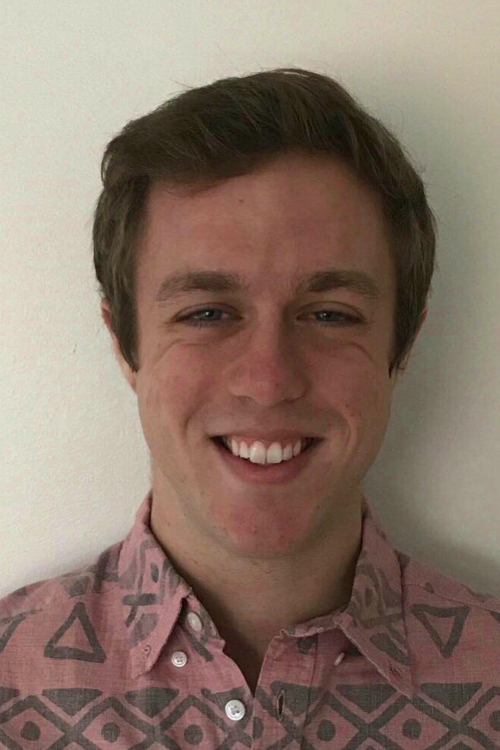 This is precisely what the work of Thomas Vandal, an iREx master’s student at the Université de Montréal under the supervision of René Doyon, is aimed at. This study, which focuses on the Beta Pictoris system, will soon be published in The Astronomical Journal.

The authors used archival data from the Antarctica Search for Transiting Extrasolar Planets (ASTEP) and the European Southern Observatory’s HARPS instrument to model the star’s activity through a Gaussian process: a statistical process that allows predictions to be made from previously obtained data. The activity of the star is usually modeled with a large number of parameters corresponding to the physical properties of the system, which makes the calculation very complex. The process used by the authors allowed them to simplify the calculation and to constrain the masses and orbits of the Beta Pictoris b and c planets.

Determining the exact mass of an exoplanet is not a simple task. When only direct imaging data are available, it is necessary to use theoretical models to estimate the mass. However, there are very few systems for which it is possible to evaluate the mass of the planet independently and thus confirm the models.

As the mass of Beta Pictoris b calculated by Thomas Vandal’s team does not depend on models, it can be compared to the mass predicted by these models. It is reassuring to note that the estimate and the prediction of some models are in agreement. It therefore allows theorists to adjust their models.

The confirmation of the planet Beta Pictoris c by direct imaging provides an opportunity to study the system again and thus hopefully better understand the Beta Pictoris system. It is a sure bet that Beta Pic will continue being one of astronomers’ favourites in the coming years!