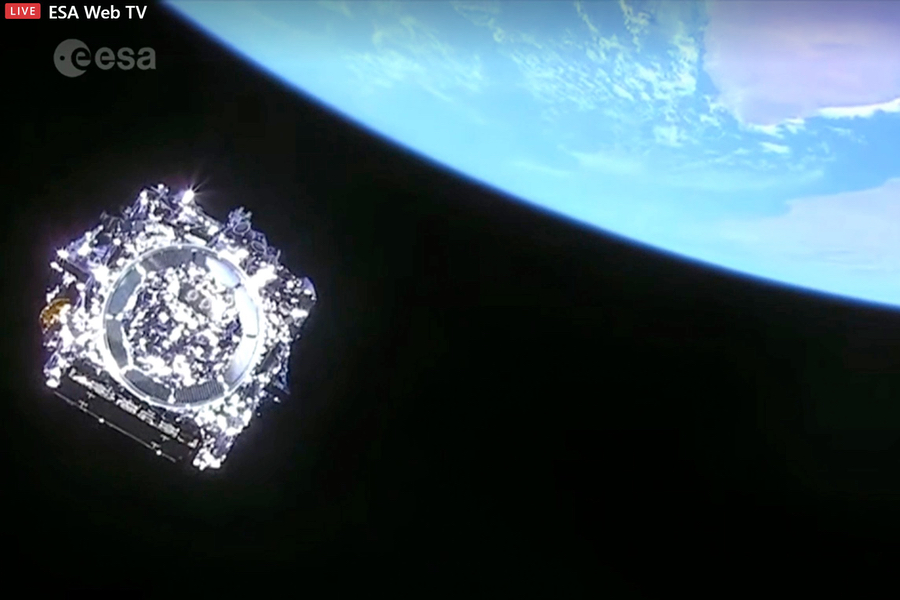 In this photo, the James Webb Space Telescope, just separated from the Ariane 5 rocket, is seen flying on its own for the first time. (Credit: ESA)

After decades of work, development and testing, the James Webb Space Telescope was finally launched into space aboard an Ariane 5 rocket on Christmas morning, December 25 2021 at 7:20 AM (Eastern). Since that magical moment, the international Webb team has celebrated milestone after glorious milestone in the mission’s timeline.

Due to a few technical and weather issues, the launch of the Webb Telescope, which was scheduled for December 18 2021 for many months prior, was finally moved to the morning of December 25. Unfortunately, due to the ongoing COVID-19 pandemic and the surge of omicron cases worldwide, many members of the international Webb team were not able to travel to the launch site in Kourou, French Guyana or the Mission Operations Center (MOC) in Baltimore, Maryland for the event. Nevertheless, the iREx and Canada were well represented in Kourou: our Director, René Doyon, and a few of his colleagues were there to witness the momentous event! 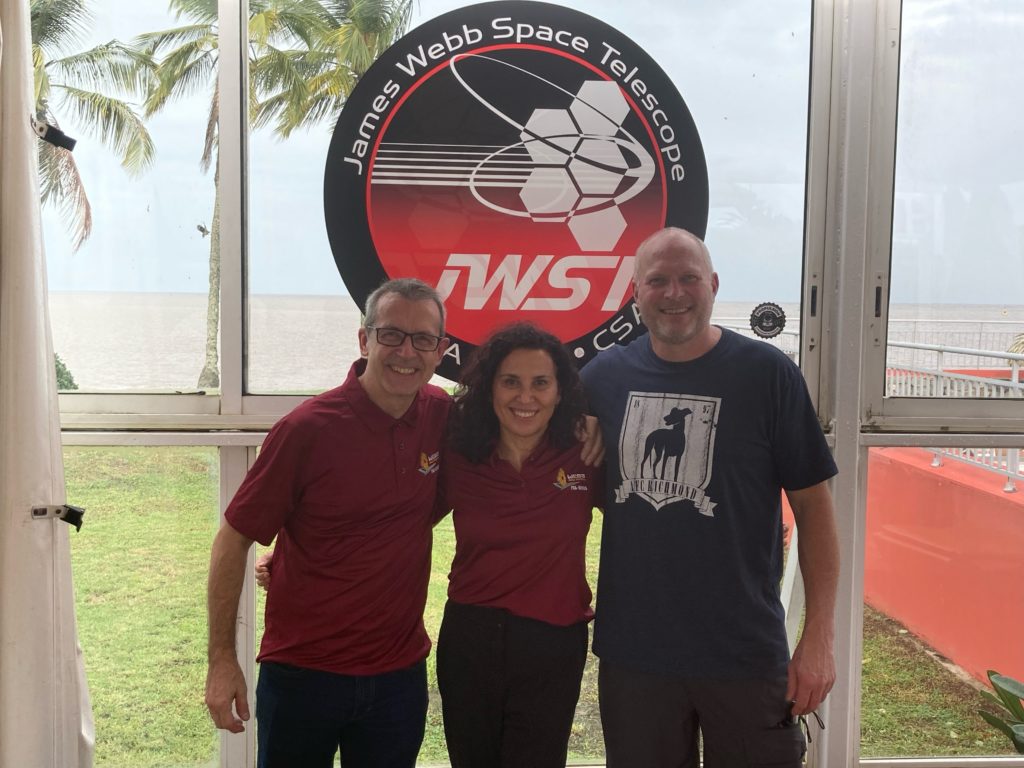 After being rolled out to its launch platform on December 23rd, the Ariane 5 rocket carrying the precious Webb Telescope was finally ready to leave Earth. At exactly 9:20am (local time in Kourou), or 7:20 am (Eastern time), on Christmas morning, tens of thousands of people tuned in online to finally witness this launch. Viewers were overjoyed to track the trajectory of the rocket which was deemed as being nominal for the entire launch.

About 30 minutes after the launch, the upper stage of the rocket finally separated from its payload. As a nice surprise for viewers, it was revealed that a camera had been placed on this upper stage to see Webb one last time as it took its next steps towards its final destination. The camera captured the observatory’s solar panel deploying right on time, ensuring that it would be sufficiently powered for the next stages of the mission. The image of Webb glittering like a diamond against a backdrop of the blackness of space and the Earth has since gone viral: a testament to the enthusiasm of the general public for the mission before the scientific operations have even begun.

Even though the launch had proven to be a complete success at this point, Webb scientists and engineers knew that the most complicated parts of the mission were yet to come. Many had alluded to the “14 Days of Terror” which followed the launch wherein the Webb Telescope needed to completely deploy from it folded-up stowed configuration. There were over 300 single points-of-failure that needed to be overcome in order for Webb to be fully deployed. The deployment of the tennis court-sized five-layer sunshield alone involved about 130 mechanisms. 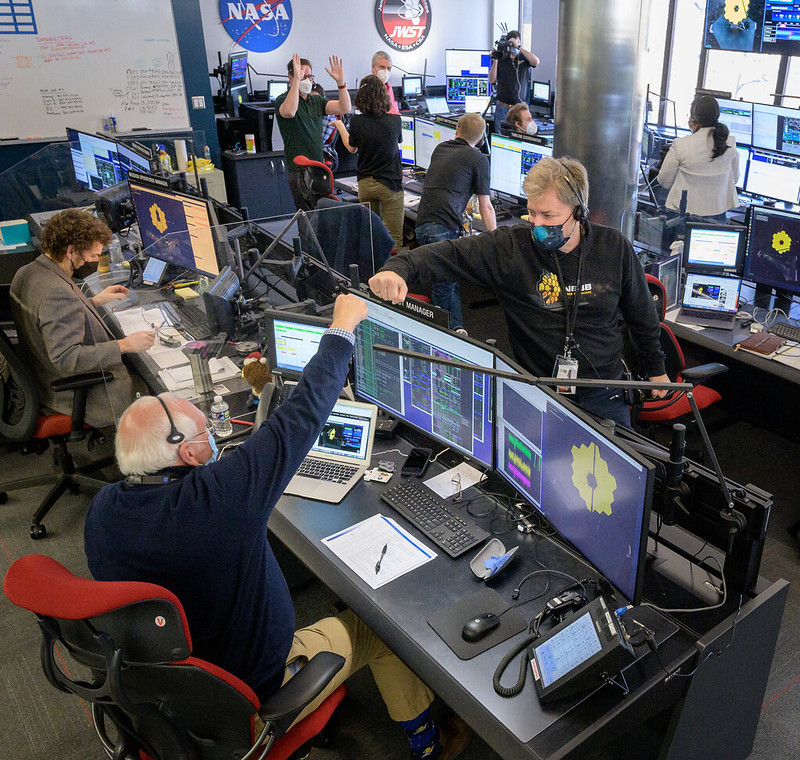 Rather than living these deployment steps in “terror”, as they had anticipated, the Webb team lived through each of these milestones together (although remotely) with great joy and celebration, as each step was performed without issue. The MOC was even opened up to the public on many occasions to allow the entire world to follow important steps of the deployment via live online broadcasts. Webb was finally in its fully deployed configuration on January 8 2022, 14 days after its launch.

Arrival and L2 and Next Steps

Over the next two weeks following the deployment, the Webb Telescope continued its journey towards its final destination around the Lagrange Point L2 1.5 million kilometers from Earth. During that time, the 18 individual segments making up the telescope’s 6.5 metre wide primary mirror unlocked from their launch positions in preparation for their alignment. A final course correction was performed on January 24th to insert Webb into its orbit around L2. The Webb Telescope was finally home!

During the last week of January, the instruments on Webb were turned on one by one (including the Canadian instrument FGS/NIRISS on January 28th!), and the team confirmed capturing the first photons through the telescope on February 3rd. The next few months will be crucial in the mission; this phase called “commissioning” will include the final alignment of the mirror, the cooling down of the telescope to its operating temperature of -233 degrees Celsius, and the testing of all its instruments. Several iREx members will be going down to the MOC in Baltimore over the next few months to lend a hand with these operations! We can expect the first images from Webb to be published this summer.

About the James Webb Space Telescope

An international collaboration between NASA, the European Space Agency and the Canadian Space Agency, the James Webb Space Telescope is the most complex and powerful space telescope ever built. Canada contributed two key elements to Webb: the Fine Guidance Sensor (FGS) and the Near-Infrared Imager and Slitless Spectrograph (NIRISS). In exchange for that contribution, Canadian researchers will have access to 5% of the observing time available to the international community.