Webb ready for a Christmas launch 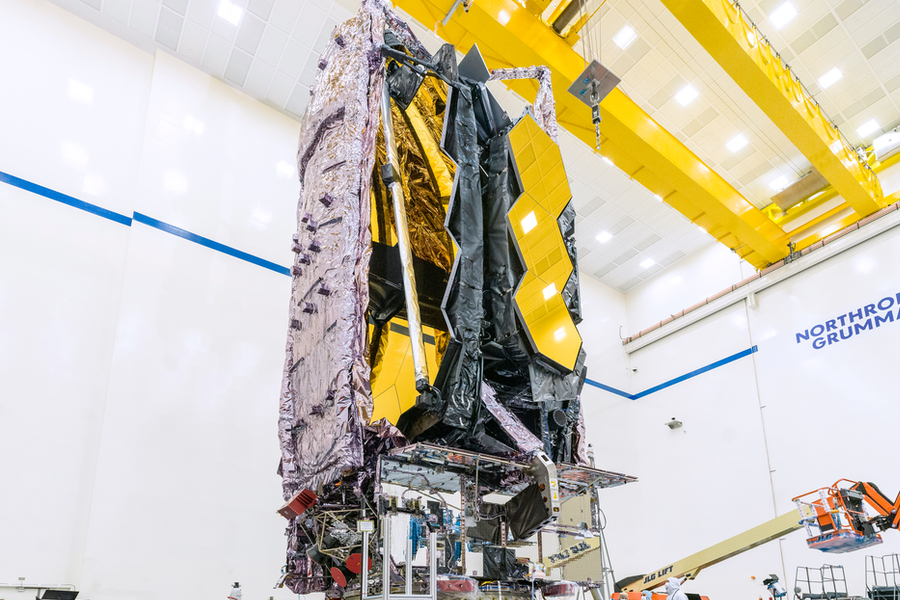 The James Webb Space Telescope is now fully assembled, tested and ready to be sent to its launch site in Kourou, French Guyana. (Credit: NASA/C. Gunn)

After more than two decades of twists and turns, challenges and successes, the James Webb Space Telescope has finally completed its battery of tests to ensure that it will survive its journey into space. The telescope includes several now assembled components including a huge sunshield, a 6.5-meter gold-coated mirror, a Canadian-made guiding camera called FGS, and four scientific instruments, including the NIRISS instrument which was designed by a team led by iREx Director René Doyon.

An Ariane 5 rocket launch from the Guiana Space Center in Kourou in 2013. The same rocket model will launch the Webb telescope into space. (Credit: Arianespace)

The Webb Telescope is currently in a clean room at Northrop Grumman in California in its stowed configuration. Engineers on site are now preparing Webb for its next trip in October: a journey through the Panama Canal to its launch site in Kourou, French Guiana on the northeast coast of South America. Once there, the telescope will be reconfigured in preparation for its launch on a massive European Space Agency Ariane 5 rocket.

In coordination with Arianespace, the company in charge of Webb’s launch, NASA has announced that the telescope is scheduled to launch on December 18th 2021. The slight additional delay is due to the launch schedule for other missions using the Ariane 5 rocket in 2021. A first launch putting two communications satellites into Earth orbit took place on July 30 with great success. A second launch is scheduled for September before Webb’s arrival in Kourou. With these two successful launches in hand, the team at the Guiana Space Center will then be able to focus on preparations for the launch of the Webb telescope.

Once launched, the telescope will travel to a distance of 1.5 million kilometers from Earth, all the while unfolding into its final configuration. This will be followed by several crucial months during which the telescope instruments will be cooled and tested to ensure their proper functioning during the science mission. The telescope mirror will also be aligned to produce the best possible images. In the meantime, teams of scientists including several iREx members, are joining the Space Telescope Science Institute in Baltimore, Maryland, to attend important launch and commissioning rehearsals. The entire iREx team and the international astronomical community are all looking forward to the Webb telescope who will revolutionise the field of astrophysics!

An international collaboration between NASA, the European Space Agency and the Canadian Space Agency, the James Webb Space Telescope is the most complex and powerful space telescope ever built. Canada contributed two key elements to Webb: the Fine Guidance Sensor (FGS) and the Near-Infrared Imager and Slitless Spectrograph (NIRISS). In exchange for that contribution, Canadian researchers will have access to 5% of the observing time available to the international community.