A journey to the new worlds 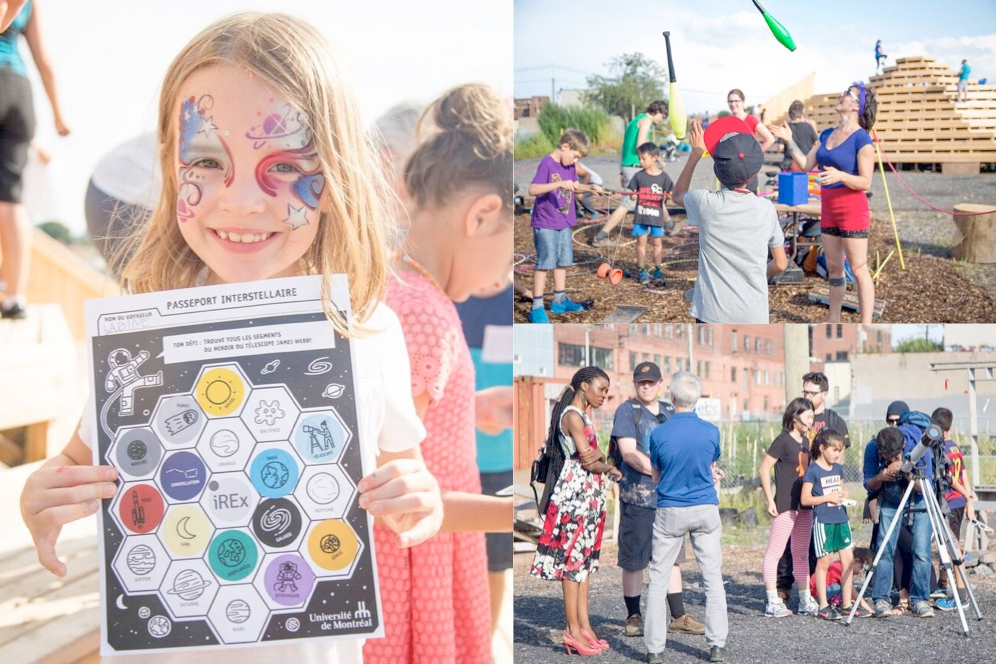 The 2017 edition of astroMIL in pictures. (Credit: M. Boyce)

On 12 August 2017, the Université de Montréal held its first “Voyage vers les nouveaux mondes,” a day filled with special astronomy-related activities on the campus MIL in Outremont. The event was an enormous success, attracting over 400 participants who all enjoyed the various exciting activities offered from 3pm until late in the evening.

Starting off at around 3pm, everyone was invited to make their own sundials while astronomers explained the history and use behind this unique tool. They then attended a demonstration of the making of a “comet” by Robert Lamontagne, coordinator of the Center of Research in Astrophysics of Quebec and member of the iREx. The planet hunt that followed was one of many highlights of the day: the participants had to find the astronomers scattered across the site, each representing one of the planets of our solar system. This reproduction of the solar system to scale was an excellent demonstration of the distances that the planets are from each other and how big the solar system really is!

Several stations were also set up at different kiosks around the site, each with their own stimulating activities. At one of them, astronomers discussed solar eclipses. At another, the participants learned the basics of robotics, thanks to the animators of Folie Technique. “Space” ice cream, prepared using liquid nitrogen by Folie Technique animators, was a great success, as was the circus workshop “walking like an astronaut” presented by Cirkazou. Another kiosk, presented by UdeM Comité Diversité Physique, presented a quiz game starring a great diversity of exceptional scientists. At the kiosk of the Observatoire du Mont-Mégantic, participants were able to meet the resident astronomer and researcher of iREx, Lison Malo, and learn more about the ASTROLab of the Parc National du Mont-Mégantic and the iREx.

Thanks to the food truck, Guru, and the caterer, La Place Commune, participants were able to enjoy dinner on-site and chat with the many astronomers, including the director of iREx, René Doyon. After a delicious meal, Robert Lamontagne presented a fascinating public lecture “Where no one has yet been – When fiction and reality meet.” An animator of the ASTROLab, Rémi Boucher, also joined us live from the top of Mont Mégantic to discuss the ASTROLab and participants enjoyed one of the last viewings of the beautiful short film “Rythmes Cosmiques.” Unfortunately, the weather did not allow us to observe the Perseids in the evening, however enthusiastic participants who stayed until the end of the night had the pleasure of attending a concert by a string quartet of the Agence Musicale Étudiante while stunning astronomical images were projected in the background.

The institute would like to thank all the participants for coming to this great event!

We would also like to thank all the volunteers of iREx, the Center for Research in Astrophysics of Québec and the Projets éphémères of the campus MIL of Université de Montréal, who all contributed to the great success of this event.

A big thank you also goes out to Cirkazou and the Agence Musicale Étudiante – AME for the animations and the concert, to Frédéric Dupuis for the event’s poster and to Julien Castanié for the interstellar passport ! Finally, a special thanks to the Faculté des arts et des sciences de l’Université de Montréal, the Observatoire du Mont-Mégantic, Folie Technique, the Comité Diversité Physique, the Éditions MultiMondes, and to the ASTROLab du parc national du Mont-Mégantic for their participation, and to Éditions Multimondes for the great astronomy books they offered to the participants.

Link to the UdeM press release