A newborn giant planet flying close to its star 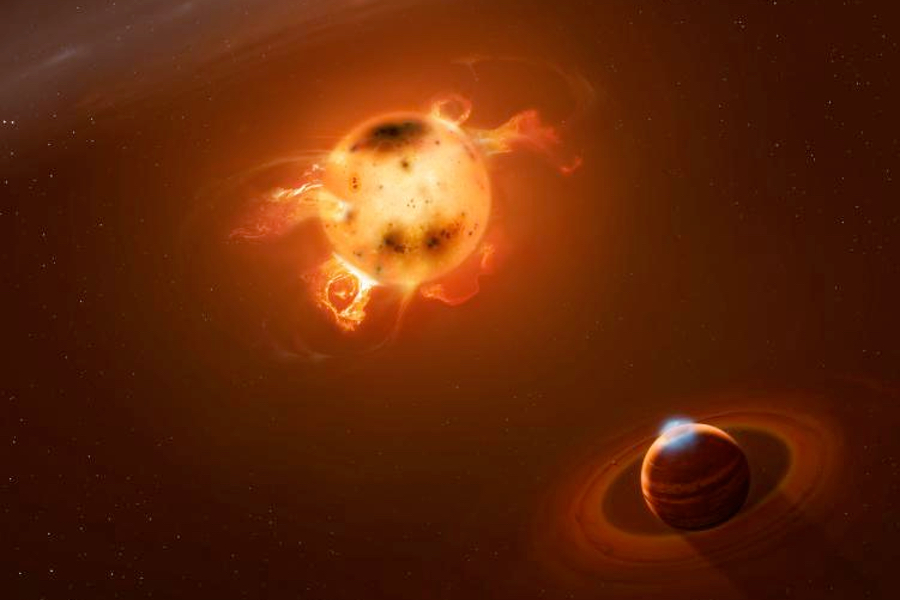 Artist's view of a newborn giant planet in the disc of an infant star. (Credit: M. A. Garlick)

For the last 20 years, the giant planets known as hot Jupiters have presented astronomers with a puzzle. How did they get into orbits 100 times closer to their host stars than our own Jupiter is to the Sun? An international team of astronomers has announced this week the discovery of a newborn hot Jupiter, orbiting an infant sun only 2 million years old – the stellar equivalent of a week-old human baby.

The discovery that hot Jupiters are already present at such an early stage of star-planet formation represents a major step forward in our understanding of how planetary systems form and evolve.

For this discovery, the team (1) monitored a 2 million-year-old infant star called V830 Tau, located in the Taurus stellar nursery 430 light-years away from us. Over the 1.5 months of the campaign, a regular 4.9-day “wobble” in the velocity of the host star revealed a giant planet almost as massive as Jupiter, orbiting its host star at a distance of only one twentieth that from the Sun to the Earth. « Our discovery demonstrates for the first time that such bodies can be generated at very early stages of planetary formation, and likely play a central role in shaping the overall architecture of planetary systems » outlines Jean-François Donati, CNRS astronomer at IRAP / OMP (2) and lead author of this new publication.

Image : Artist view of a newborn giant planet in the disc of an infant star. Copyright Mark A. Garlick / markgarlick.com

In our solar system, small rocky planets like the Earth are found near the Sun, whereas gas giants like Jupiter and Saturn orbit much further out. « The discovery in 1995 of a giant planet sitting very close to its host star took us by surprise and revolutionized the field » recalls Claire Moutou, CNRS astronomer at the Canada-France-Hawaii Telescope (3) (CFHT) and coauthor of this new study. Theoretical work indicates that such planets can only form in the cold and icy outer regions of the protoplanetary disc in which both the central star and surrounding planets are born. Some, however, migrate inwards without falling into their host star, thus becoming hot Jupiters.

« Planet formation models could not choose between two competing explanations of how and when this migration of hot Jupiters occurred. Either it happened early while these planets were still forming, or much later, with some planets being kicked closer to their stars due to the interaction of multiple planets, or both » explains Clément Baruteau, CNRS astronomer at IRAP / OMP and coauthor of this study. « Our discovery demonstrates that the first option is taking place; it revives the long-running debate about how and when this migration occurs, and brings us one step forward in our understanding of how planetary systems form ».

Among the known hot Jupiters, some feature strongly-tilted or even upside-down orbits, suggesting they were knocked into close orbits by interactions with other planets or neighboring stars. Others orbit above the host star’s equator, hinting at a more gentle formation process in the form of an inward drift through the disc. Whereas the latter mechanism must occur in the first few million years of the host star’s life, the former operates a hundred times more slowly. « Conversely to the tilted hot Jupiters which obviously had violent origins, the young hot Jupiter we just detected comes as the first evidence that early disc migration is also happening » says Andrew Collier Cameron of the University of St Andrews, coauthor of the study.

For this discovery, the team used the twin spectropolarimeters ESPaDOnS and Narval, built at IRAP / OMP in Toulouse, France. ESPaDOnS is mounted at the 3.6-m CFHT on Maunakea, a dormant volcano on the Big Island of Hawaii, and can be fibre-fed from either CFHT itself, or via GRACES, a 300-m optical-fibre link from the nearby 8-m Gemini-North telescope, with both modes used for our study. Narval is mounted at the 2-m Télescope Bernard Lyot (4) (TBL) atop Pic du Midi in the French Pyrénées. « Using all three telescopes was essential for monitoring regularly V830 Tau throughout our campaign and for detecting its giant planet » stresses Lison Malo, CFHT astronomer, coauthor of the study and key to coordinating the observations.

«  SPIRou and SPIP, the twin new-generation instruments built for CFHT and TBL by our team and scheduled for first light in 2017 and 2019 respectively, will offer vastly superior performances for such programmes, and will soon allow us to explore the formation of new worlds with unprecedented sensitivity», adds Louise Yu, coauthor of the study and PhD student in observational exoplanet science at IRAP / OMP.