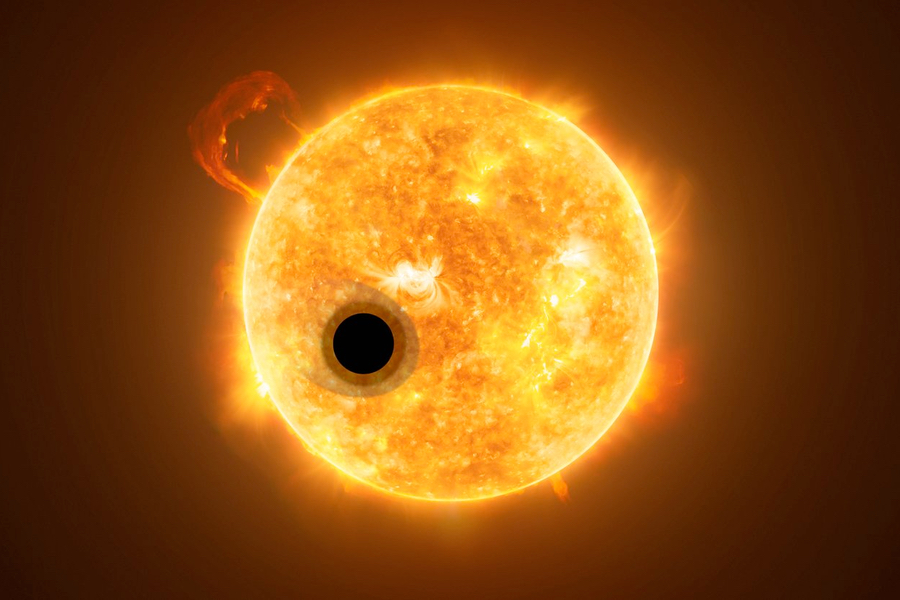 Artistic rendition of the exoplanet WASP-107b and its star, WASP-107. Some of the star’s light streams through the exoplanet’s extended gas layer. (Credit: ESA/Hubble/NASA/M. Kornmesser)

A University of Montreal-led team of astronomers discovers that the core mass of exoplanet WASP-107b is much lower than previously thought possible for a gas-giant planet.

The core mass of the giant exoplanet WASP-107 b is much lower than what was thought necessary to build up the immense gas envelope surrounding giant planets like Jupiter and Saturn, a Canadian-led team of astronomers has found. 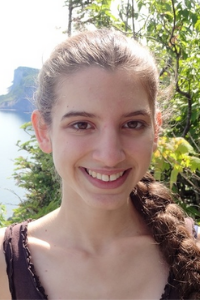 Piaulet is part of the groundbreaking research team of UdeM astrophysics professor Björn Benneke that in 2019 announced the first detection of water on an exoplanet located in its star’s habitable zone.

Published today in the Astronomical Journal with colleagues in Canada, the U.S., Germany and Japan, the new analysis of WASP-107b’s internal structure “has big implications,” said Benneke.

“This work addresses the very foundations of how giant planets can form and grow,” he said. “It provides concrete proof that massive accretion of a gas envelope can be triggered for cores that are much less massive than previously thought.“

As big as Jupiter but 10 times lighter

WASP-107b was first detected in 2017 around WASP-107, a star about 212 light years from Earth in the Virgo constellation. The planet is very close to its star — over 16 times closer than the Earth is to the Sun. About as big as Jupiter but 10 times lighter, WASP-107b is one of the least dense exoplanets known: a type astrophysicists have dubbed “super-puffs” or “cotton-candy” planets.

Piaulet and her team first used observations of WASP-107 obtained at the Keck Observatory in Hawai’i to assess the planet’s mass more accurately. They used the radial velocity method, which allows scientists to determine a planet’s mass by observing the wobbling motion of its host star due to the planet’s gravitational pull. They concluded that the mass of WASP-107b is about one tenth that of Jupiter, or about 30 times that of Earth. 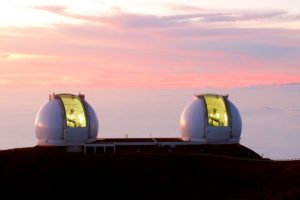 The W.M. Keck Observatory on the top of Mauna Kea, in Hawai’i. (Credit: Andrew Cooper)

The team then did an analysis to determine the planet’s most likely internal structure. They came to a surprising conclusion: with such a low density, the planet must have a solid core of no more than four times the mass of the Earth. This means that more than 85 percent of its mass is included in the thick layer of gas that surrounds this core. In comparison, Neptune, which has a similar mass to WASP-107b, only has 5 to 15 percent of its total mass in its gas layer.

“We had a lot of questions about WASP-107b,” said Piaulet. “How could a planet of such low density form? And how did it keep its huge layer of gas from escaping, especially given the planet’s close proximity to its star?

“This motivated us to do a thorough analysis to determine its formation history.”

A gas giant in the making

Planets form in the disc of dust and gas that surrounds a young star called a protoplanetary disc. Classical models of gas-giant planet formation are based on Jupiter and Saturn. In these, a solid core at least 10 times more massive than the Earth is needed to accumulate a large amount of gas before the disc dissipates.

Without a massive core, gas-giant planets were not thought able to cross the critical threshold necessary to build up and retain their large gas envelopes.

How then do explain the existence of WASP-107b, which has a much less massive core? McGill University professor and iREx member Eve Lee, a world-renowned expert on super-puff planets like WASP-107b, has several hypotheses.

“For WASP-107b, the most plausible scenario is that the planet formed far away from the star, where the gas in the disc is cold enough that gas accretion can occur very quickly,” she said. “The planet was later able to migrate to its current position, either through interactions with the disc or with other planets in the system.”

Discovery of a second planet

The Keck observations of the WASP-107 system cover a much longer period of time than previous studies have, allowing the UdeM-led research team to make an additional discovery: the existence of a second planet, WASP-107c, with a mass of about one-third that of Jupiter, considerably more than WASP-107b’s.

WASP-107c is also much farther from the central star; it takes three years to complete one orbit around it, compared to only 5.7 days for WASP-107b. Also interesting: the eccentricity of this second planet is high, meaning its trajectory around its star is more oval than circular.

“WASP-107c has in some respects kept the memory of what happened in its system,” said Piaulet. “Its great eccentricity hints at a rather chaotic past, with interactions between the planets which could have led to significant displacements, like the one suspected for WASP-107b.”

Beyond its formation history, there are still many mysteries surrounding WASP-107b. Studies of the planet’s atmosphere with the Hubble Space Telescope published in 2018 revealed one surprise: it contains very little methane.

“That’s strange, because for this type of planet, methane should be abundant,” said Piaulet. “We’re now reanalysing Hubble’s observations with the new mass of the planet to see how it will affect the results, and to examine what mechanisms might explain the destruction of methane.”

The young researcher plans to continue studying WASP-107b, hopefully with the James Webb Space Telescope set to launch in 2021, which will provide a much more precise idea of the composition of the planet’s atmosphere.

“Exoplanets like WASP-107b that have no analogue in our Solar System allow us to better understand the mechanisms of planet formation in general and the resulting variety of exoplanets,” she said. “It motivates us to study them in great detail.”