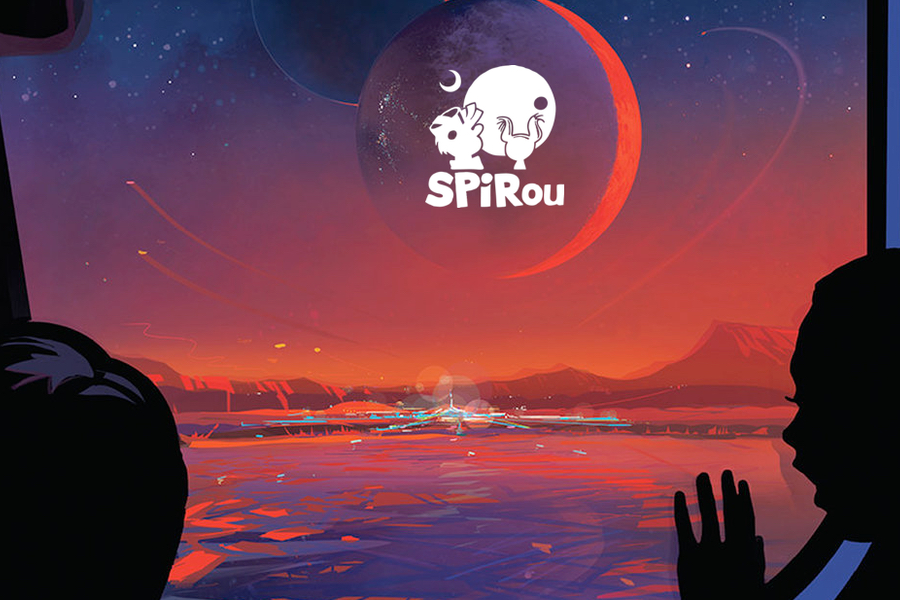 SPIRou is about to begin its exploration of planetary systems around nearby red dwarf stars, such as the TRAPPIST-1 system, shown here in an artistic representation as seen from TRAPPIST-1 e. (Credit: NASA/SPIRou)

Nine months after capturing its first images from atop Maunakea in Hawaii, the scientific instrument SPIRou (SpectroPolarimètre InfraRouge) got the green light to begin its first scientific observation campaign at the Canada-France-Hawaii Telescope (CFHT). The instrument was delivered at the CFHT in January 2018 and has since undergone a battery of performance tests to ensure it will be able to achieve the international SPIRou team’s scientific goals.

The idea behind SPIRou

SPIRou was first conceptualized in 2010. At that time, the Kepler Space Telescope had already begun its observing campaign and was detecting a surprising number of exoplanet candidates using the transit method. This method does not, however, allow the measurement of a number of important characteristics of the detected exoplanet, such as its mass, or of its host star. Researchers from France, Canada, Brazil, Taiwan, Switzerland, and Portugal thus decided to build an instrument together that would provide this missing information in follow-up studies of Kepler exoplanets and allow us to answer important questions such as “Where are the closest habitable worlds?” and “How do the magnetic fields of stars affect planet formation?”.

SPIRou, a high-resolution infrared spectropolarimeter and a high-precision velocimeter, was designed to detect the tiny motion of stars due to the presence of one or more Earth-like exoplanets orbiting them, and to study the magnetic fields of stellar systems. Lead by Principal Investigator Jean-François Donati (Université de Toulouse, IRAP) and co-PI René Doyon, this instrument will be particularity effective in finding and characterising exoplanets that have a size similar to Earth orbiting red dwarfs, stars that are colder and less massive than our Sun and that are very common in our solar neighbourhood. It will not only be able to perform follow-up observations of Kepler candidates, but will also become a workhorse instrument to measure the mass of new nearby transiting exoplanets soon to be discovered by the NASA Transiting Exoplanet Survey Satellite (TESS) mission. These planets will be prime candidates to have their atmospheres detected and characterised by the James Webb Space Telescope (JWST).

A strong instrumentation team in Québec 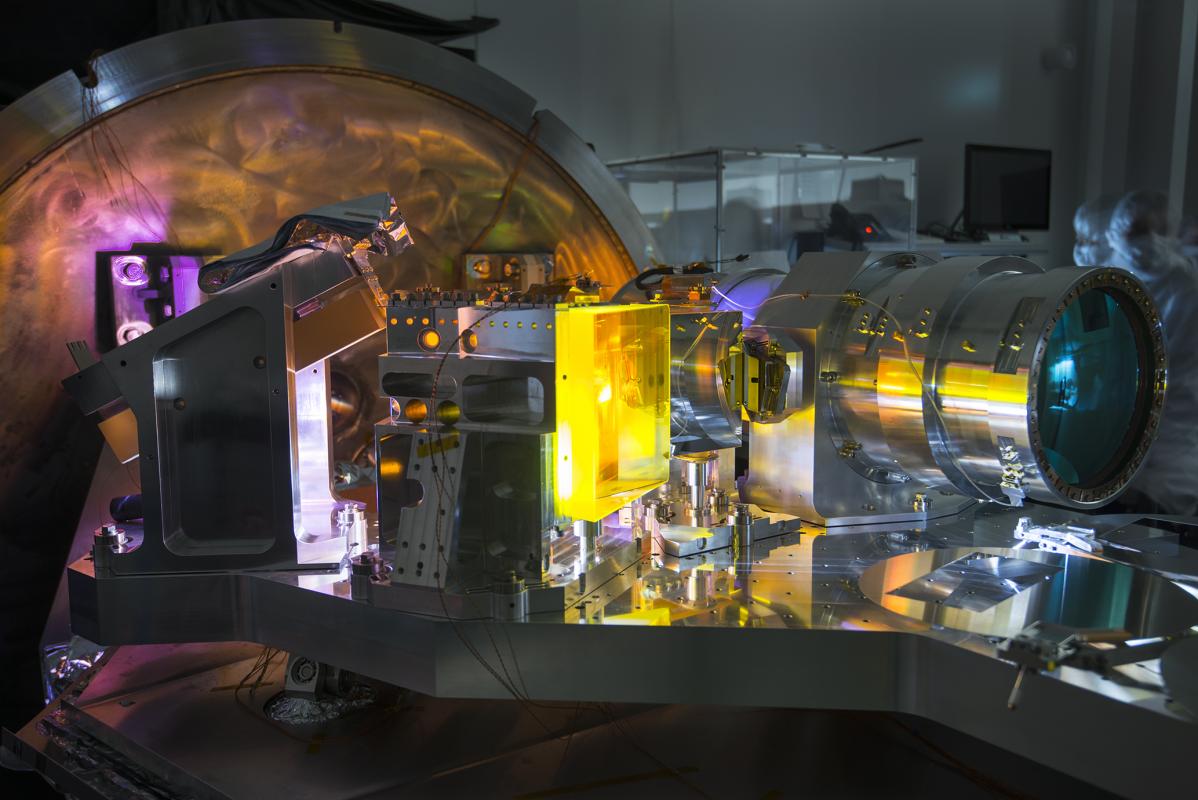 The spectrograph optics on the SPIRou cryogenic bench in the clean room at IRAP/OMP. (Credit: S. Chastanet/CNRS/UPS/OMP)

Building off their strong expertise in instrumentation, the astronomy research group at the Université de Montréal and the optical engineering group at the Université Laval were uniquely positioned to help with the construction of SPIRou. Both universities have a long history of developing astronomical instruments which has lead to the creation of the Laboratoire d’astrophysique expérimentale at the Observatoire du Mont-Mégantic which they own jointly.

Université Laval professor and iREx associate member Simon Thibault and his team contributed heavily to the optical design of SPIRou’s spectrograph and science camera. The team also worked on the optomechanical integration of SPIRou’s camera which required a micro-level accuracy for the centring of the lenses. Prof. Thibault, who is an NSERC Industrial Research Chair and the Director of the Optical Engineering Research Laboratory in Quebec has overseen the development of many advanced optical systems. Through international collaborations, he is very involved in the design and development of major astronomical instruments for the next generation of astronomical telescopes.

The Université de Montréal team, lead by iREx Director and SPIRou Co-PI Prof. René Doyon, lead the efforts for the design and development of SPIRou’s spectrograph camera and infrared detector and contributed to a number of the project’s other components. The lead Project Scientists are iREx’s Étienne Artigau and Xavier Delfosse from the Institut of planétologie et d’astrophysique de Grenoble in France. The project has also, until recently, been expertly managed by Olivier Hernandez, one of iREx’s founding members and now the Director of the Rio Tinto Alcan Planetarium of Montreal.

In order to observe cooler red dwarf stars, SPIRou’s instruments have to operate in the infrared, and the UdeM/ULaval team has accumulated impressive amounts of experience in this field working on other infrared instruments such as JWST’s NIRISS, CFHT’s WIRCAM and Gemini-South’s GPI.

Putting it to the test

For the last year, SPIRou has been submitted to strict testing by the project team to measure its performance on important observation parameters, including its radial velocity precision. Acceptance tests and a review panel have confirmed that the instrument is ready for scientific operations, and it has been green lit to begin its ambitious science campaign in mid-February.

iREx members Étienne Artigau and Neil Cook were especially crucial in reaching the current precision threshold in radial velocity of 2 m/s, among the best ever achieved in the infrared for this kind of complex instrument. The SPIRou team is very confident that improvement in the data reduction pipeline and the correction for spectral lines due to the Earth’s atmosphere will improve SPIRou’s performance near the initial goal of a precision of 1 m/s. These small velocities, equivalent to the average walking speed of a human on Earth, are the level of precision needed to detect the wobble of red dwarfs caused by an Earth-like planet orbiting them.

SPIRou will use approximately a quarter of the Canada-France-Hawaii Telescope’s observing time in the next four years. (Credit: CFHT)

Fifty nights have already been scheduled for semester 2019A for the SPIRou Legacy Survey which will seek to answer SPIRou’s biggest science questions, and 300 nights have been allocated towards this program over the next four years. Many high-profile targets will be observed by SPIRou soon, including the famous TRAPPIST-1 system which contains seven Earth-sized rocky planets orbiting a dwarf star approximately 40 light-years away. The exoplanets studied by SPIRou will likely be ideal candidates for the upcoming JWST mission which will use transit spectroscopy to characterise the atmospheres of exoplanets and determine their habitability.