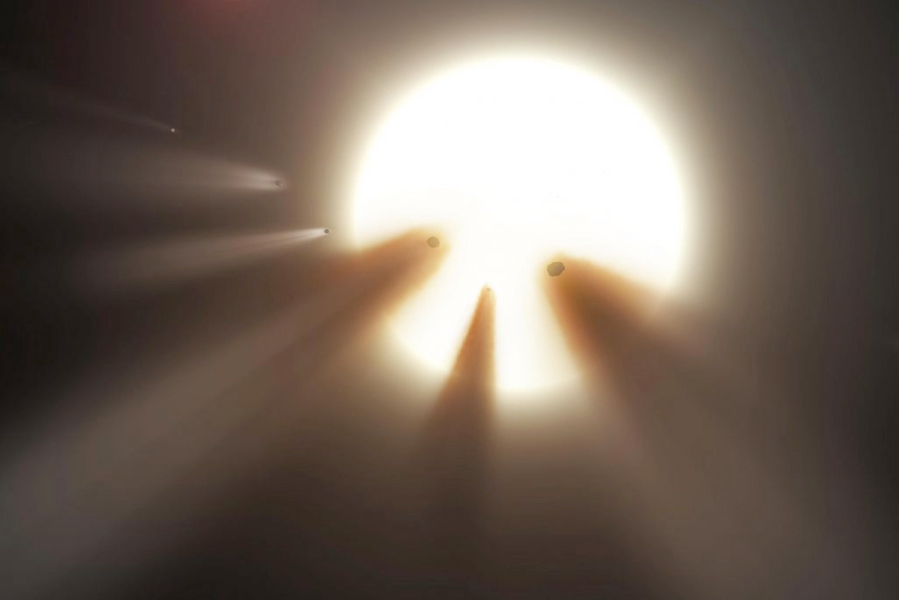 Artistic representation of a swarm of comet fragments hiding a portion of a star's light. (Credit: NASA/JPL-Caltech)

Few stars have sparked the curiosity of astronomers and the general public as much as KIC 8462852. Commonly known as Tabby’s Star or Boyajian’s Star, in honor of the American astronomer, Tabetha S. Boyajian, this unique star is only a little warmer than the Sun. In 2015, it was noticed that it was not your standard star; in observations made by the Kepler space telescope between 2009 and 2013, its light fluctuated in a very strange way. Dozens of hypotheses have been put forward to explain the observed dimming of Tabby’s Star’s luminosity, ranging from a swarm of comets to extraterrestrial megastructures, however none seem to explain the observations entirely. In recent months, new variations of the light of Boyajian’s Star have been observed and iREx astronomers have joined the worldwide effort to unravel the secret of this curious star, thanks to the new PESTO camera on the Observatoire du Mont-Mégantic.

Boyajian’s Star is about 1400 light-years away from the Earth, in the Cygnus constellation. It is an area of ​​the sky that was observed continuously during the four-year mission of the Kepler Space Telescope. This telescope has aided in the detection of several thousand exoplanets, which have been identified by characteristic decrease in light that occurs when a planet passes in front of its star (transit method). Amateur astronomers participating in the project “Planet Hunters” first spotted the unique behavior of Tabby’s Star. Soon after, Professor Tabetha (“Tabby”) Boyajian and her colleagues, professional and amateur astronomers, summarized the observations in a scientific article published September 2015. In the Kepler light curve, a dozen distinct luminosity dips are visible, ranging from a decrease of just a few percent up to a much more significant 20% of the star’s original luminosity. During these episodes, the star remains fainter for a few days to a few weeks, before returning to normal.

The light curve of Boyajian’s Star, which was observed continuously by the Kepler Space Telescope between 2009 and 2013. A dozen decreases in brightness, ranging from less than one percent to more than 20% of the total light of the star, were observed over this period. Credit: Boyajian et al. 2015

Instrumental and analysis errors alone are too insignificant to explain Tabby’s Star’s luminosity fluctuations. Furthermore, the dips are too great and do not occur regularly enough to be explained solely by the passage of a planet in front of the star. A planet – even a giant one – blocks up to one or two per cent of its star’s light at most; this dimming occurs periodically every time the planet passes in front its star. Some stars do show some irregularities in their luminosity, however these are usually very young stars surrounded by gas and dust. This does not seem to be the case here: KIC 8462852 shows no sign of youth. More specifically, observations in the infrared found no trace of heated dust, typically found around young stars.

In 2016, even more intriguing evidence surfaced. Based on archived data, American researcher Bradley E. Schaefer argues that Boyajian’s Star’s flux decreased by about 20% from 1890 to 1989. However, due to the difficulty of accurately comparing astronomical observations taken over such a long period and recorded on photographic plates, this result was disputed. A few months later, another team presented a new analysis of Kepler’s four years of data. They show that over this period, it is probable that the light of the star decreased by approximately 3% in a monotonous but irregular way. These long-term decreases, if confirmed, add another mysterious and unexpected element about the Boyajian Star.

Over the past two years, more than a dozen scientific articles have been published in specialized journals in an attempt to explain the unusual behavior of the Boyajian Star. The hypothesis favored by Boyajian and her colleagues, published in the 2015 article, proposes that a swarm of fragments of comets or planets may orbit around this star, perhaps as a result of a collision. However, this proposition is not perfect: it would require a lot of orbiting fragments and it also does not easily explain the decrease in Boyajian Star’s luminosity over several years.

In an article published in 2016, researchers Jason Wright and Steinn Sigurdsson summarize several plausible solutions. Among these is a hypothesis which, although very unlikely and not favored by astronomers, has brought a lot of attention on the star. They theorize that the unique light curve could be explained by megastructures, built by an intelligent species, to efficiently exploit the energy of its star. However, observations were made by the SETI program, the search for extraterrestrial intelligence, and no characteristic features of emissions that could be associated with such civilizations were found in the observations made in the visible and radio wavelength ranges. Moreover, no trace of heat that would likely be released by these superstructures has been observed. 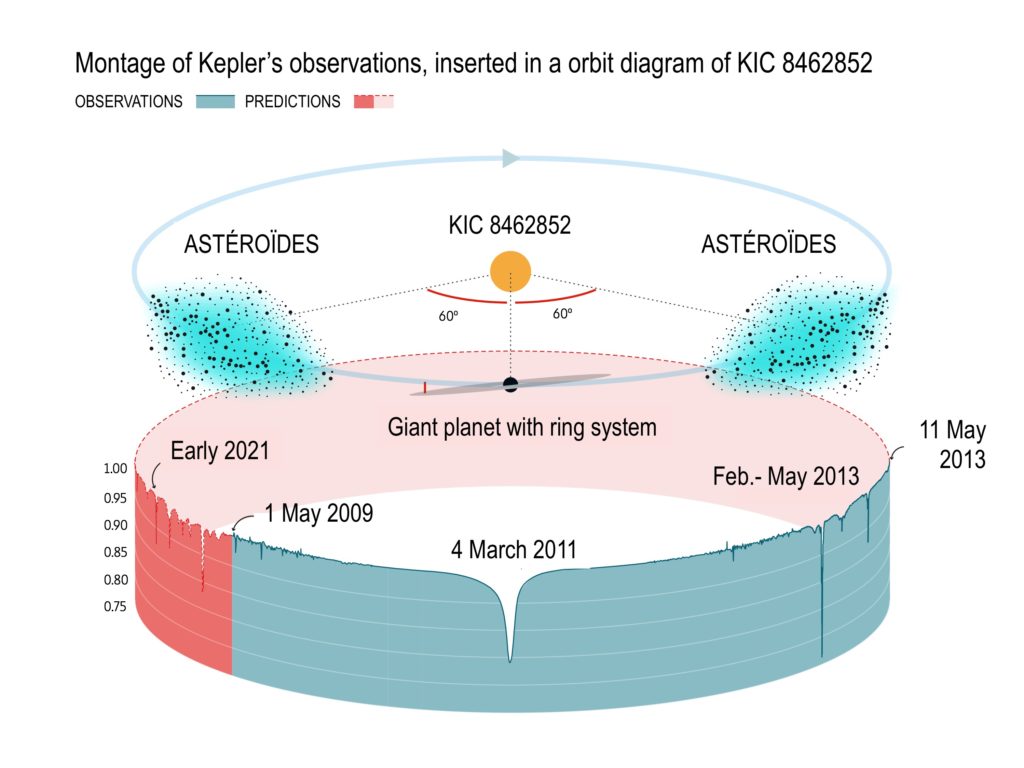 Scenario proposed by a team of Spanish astronomers: a giant planet with rings would be preceded and followed by two swarms of asteroids, all of these hiding part of the light of their star as they pass in front of it. Credit: Ballestros et al. 2017

A recent article presents another hypothesis to explain the Kepler light curve. A very large planet with a ring system similar to that of Saturn could explain the largest decrease in luminosity, while the preceding and following fluctuations could be explained by two swarms of asteroids that precede and follow the planet on its orbit. The scenario has the advantage of not invoking exotic phenomena, but it also has flaws. The number of asteroids needed and the size of the planet both seem unlikely, and this scenario also does not explain the slow decline in luminosity observed in archived data and in the Kepler observations.

On May 19, further evidence was uncovered. Thanks to a Kickstarter project initiated by Professor Boyajian and his colleagues to watch the Boyajian Star continuously with a global network of telescopes (Las Cumbres Observatory), a dip of the star’s light was once again observed. The modest decrease of about 2% lasted a few days, and it was followed by dozens of telescopes responding to Professor Boyajian’s call to action.

This time, iREx researchers, joining the global effort to observe the star, used the PESTO camera, recently mounted on the Observatoire du Mont-Mégantic, to observe the Boyajian Star. Observations were made at the very high rate allowed by PESTO, in several astronomical filters. The data will be analyzed and sent to Professor Boyajian and her colleagues in the coming months.

Boyajian’s Star will keep professional and amateur astronomers busy for a while; the May decrease was followed closely by another, beginning around June 11th, that is still ongoing at the time we write this article (6 July 2017). Meanwhile, this saga illustrates perfectly what astronomy research in the 21st century can be: exciting ideas, collaboration between professional and amateurs scientists from across the world, and rapid evolution of the problem, possible by the incredible means of communication available today.