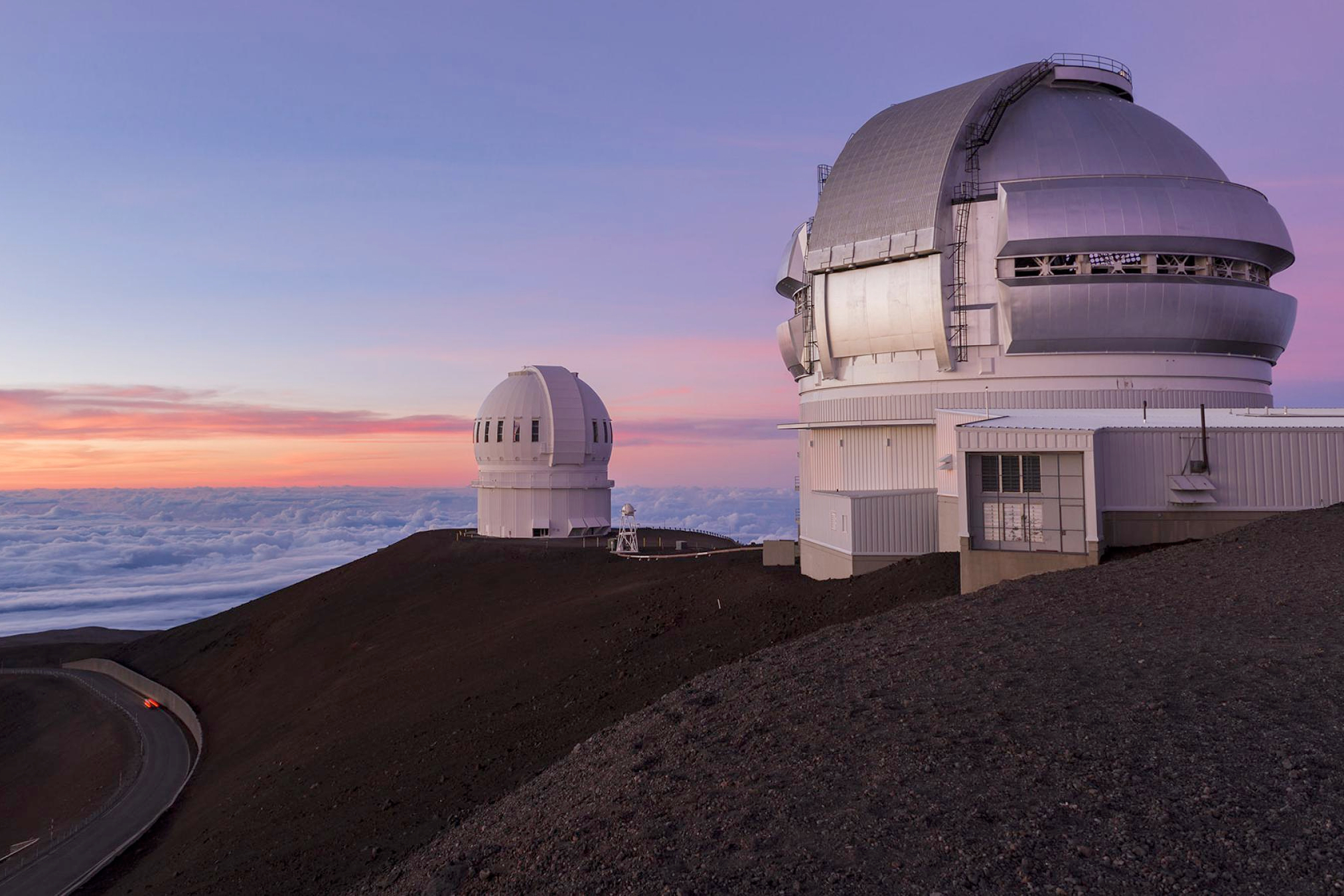 The Canada-France-Hawaii Telescope (left) and the Gemini-North Observatory (right) atop Maunakea in Hawai'i. (Credit: Shutterstock)

End of May 2018, evenings were warm and humid on the Hawaii Big Island as the dust from the Kilauea volcano eruption a couple weeks earlier was still settling. Six Canadian students were about to take part of the ten day Maunakea Graduate School (MKGS) under the supervision of professional astronomers. Together, students and astronomers participated in conferences and proceeded to visit the great Hawaiian observatories located atop the dormant volcano Maunakea. The program was an exciting one: understand instruments used in astronomy, learn about observatory operations, conceive and lead a scientific program on the Canada-France-Hawaii telescope (CFHT) and Gemini-North, and of course, take in some Hawaiian culture. 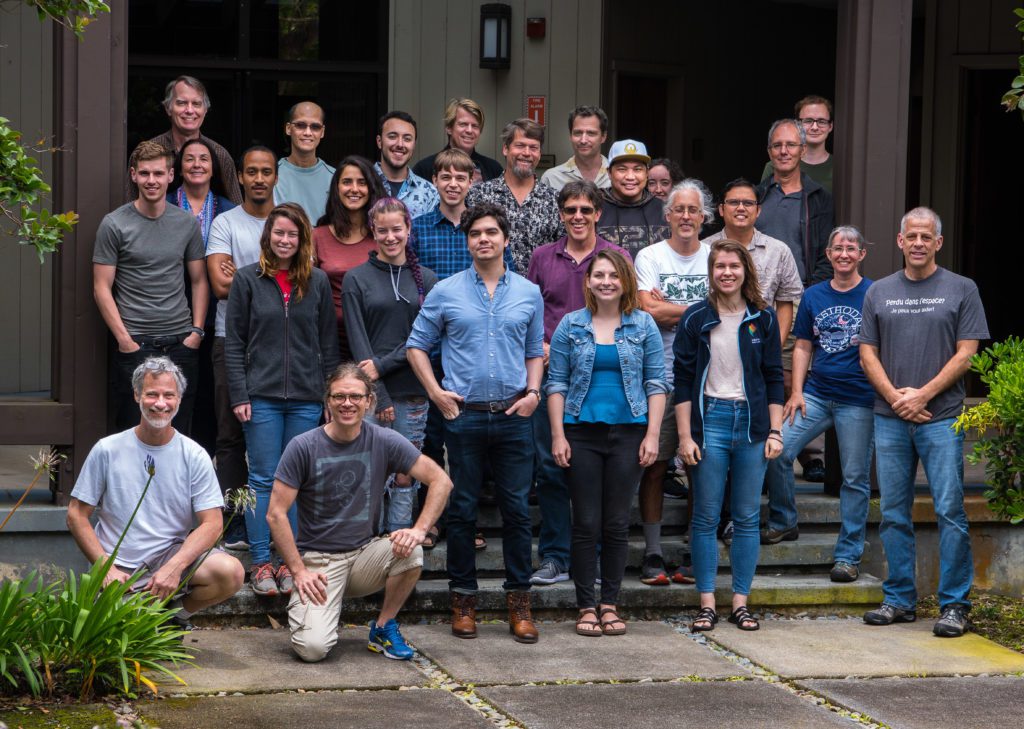 The students, Stéphane Courteau (far right) and all the staff from the Canada-France-Hawaii Telescope, in front of the CFHT headquarters in Waimea.

This was the 8th edition of the MKGS, a program created and lead by Stéphane Courteau, a professor at Queen’s University in Kingston, Ontario. The Institute for Research on Exoplanets (iREx) is also proud to be associated with this unique program. The MKGS presents an opportunity for six Master’s or PhD students in astrophysics to explore modern techniques in observational astronomy. Observatories, which once saw astronomers come on site to operate their telescopes, now function remotely via a ‘queue mode’, where it is rather a resident astronomer that conducts observations and later shares them with the principal investigators. Opportunities for our next generation of astronomers to learn off-hand how observatories work and to operate telescopes directly have all but disappeared. Hence the emphasis of the MKGS on astronomical instrumentation and observational methods to better educate our students and allow them to hone their skills as astronomers. During our school, resident astronomers, staff and engineers give several presentations, complemented by technical demonstrations and laboratory tours. The CFHT and Gemini-North, which both enjoy Canada’s membership, have hosted the MKGS since 2010. 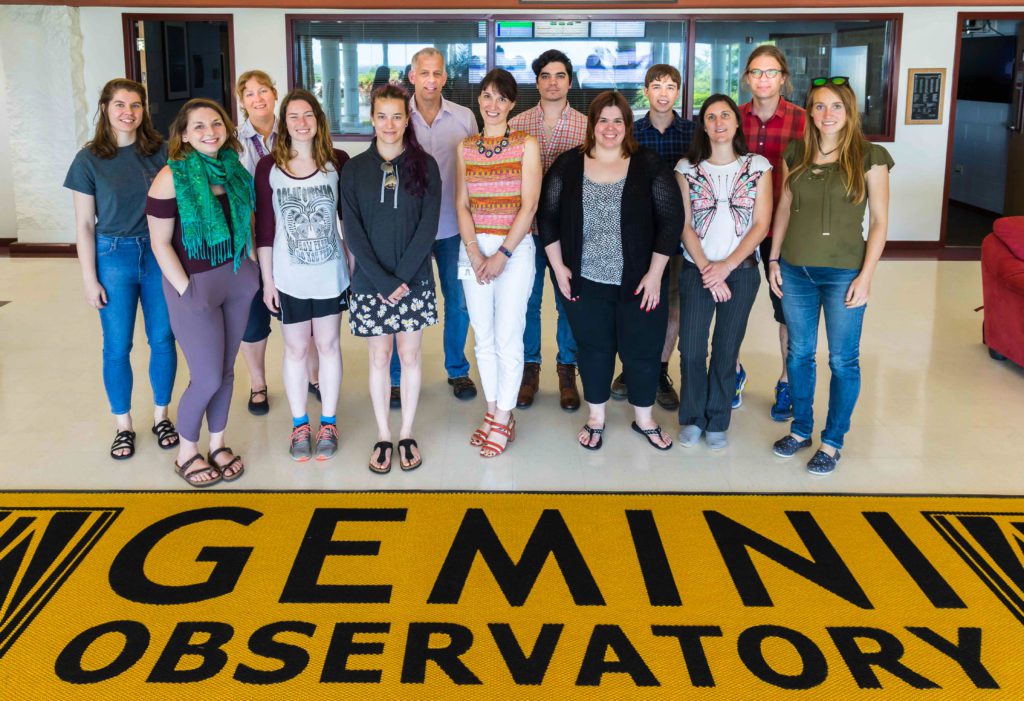 The students at Gemini Observatory headquarters in Hilo, with Gemini director Laura Ferrarese (in the centre).

One of the highlights of the MKGS stems from the generosity of CFHT and Gemini, who each provide two hours of discretionary time for our students to conduct their observations of some of the biggest telescopes in the world. The students each propose a detailed science case, and select the best ones amongst themselves, emulating procedures followed by Canadian astronomers on the world stage. Weather permitting, as was the case this year, observations are taken on site (in classic mode) and subsequently analyzed. 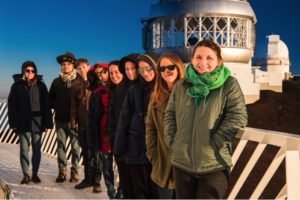 The beginning and end of this journey took place at the CFHT headquarters in Waimea. The group also travelled to the Gemini-North headquarters in Hilo and the Maunakea summit, spending the night at the astronomers’ residences in Hale Pohaku, in order to visit the different telescopes (CFHT, Gemini, JCMT, Keck, Subaru).

A first of this year was the meeting with Lanakila Mangauil, a strong proponent of Hawaiian culture and opponent to building TMT on Maunakea, which ranks as one of the best sites in the world for observational astronomy. The CFHT director, Doug Simons, who had informed our students about the sensitive topic of Maunakea developments and growth on the sacred mountain, also joined the group to the Hawaiian Cultural Center of Hamakua, which Lanakila established a couple years ago in Honoka’a. The meeting, and the opportunity to appreciate each other’s viewpoints, was a great success and will be featured again next year.

The next edition of the MKGS will take place in April/May next year; an announcement will be made this fall for candidates to apply.

The realization of this program (MKGS) is made possible by contributions from iREx, CFHT and Gemini observatories, as well a number of astronomers from Canada and Hawaii.