Signs of CO2 in a planet beyond our Solar System 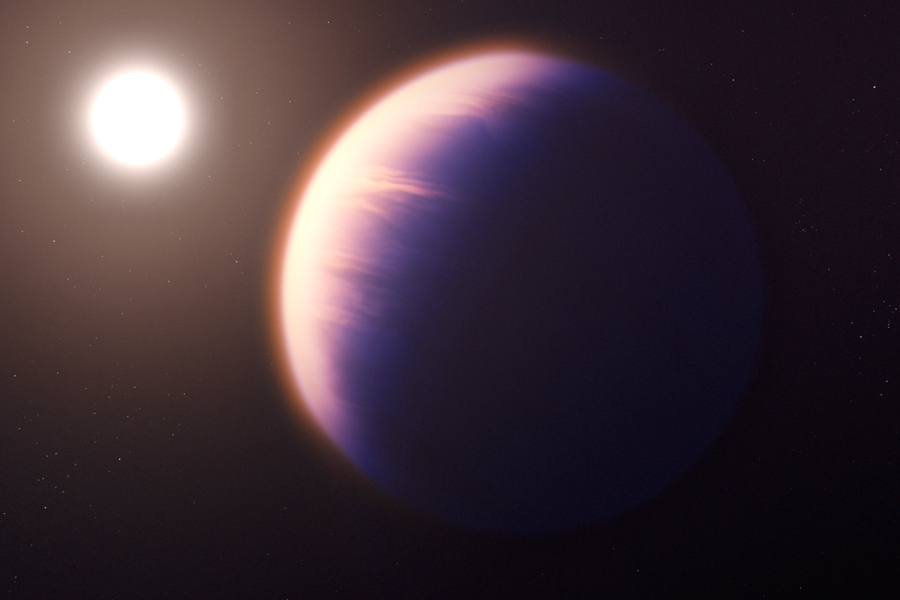 Showing how precise it can be, the James Webb Space Telescope detects the first definitive carbon dioxide signature in an exoplanet atmosphere.

In a remarkable display of its precision and accuracy, the James Webb Space Telescope (JWST), a collaboration between NASA, the European Space Agency, and the Canadian Space Agency, has captured definitive evidence for carbon dioxide in the atmosphere of a gas giant planet orbiting a Sun-like star 700 light-years away.

The result, which is accepted for publication in Nature, provides important insights into the composition and formation of the exoplanet and is indicative of Webb’s ability to detect and measure carbon dioxide in the thinner atmospheres of smaller rocky planets. And beyond that, better understanding such exoplanets could lead to finding worlds that could harbor extraterrestrial life.

The team that made the discovery obtained time on the telescope through an Early Release Science program, which was chosen to collect some of Webb’s first data after the start of its scientific operations in late June

Led by Natalie Batalha of the University of California Santa Cruz, the team includes astronomers from all over the world, including Université de Montréal’s Björn Benneke, who is also a member of the Institute for Research on Exoplanets (iREx).

The observing program’s target, WASP-39 b, is a hot gas giant planet with a mass roughly one-quarter that of Jupiter (about the same as Saturn) and a diameter 1.3 times greater than Jupiter. Its extreme puffiness is related in part to its high temperature (about 900°C). Unlike the cooler, more compact gas giants in our Solar System, WASP-39 b orbits very close to its star – only about one-eighth the distance between the Sun and Mercury – completing one orbit in just over four Earth-days. The planet’s discovery, reported in 2011, was made based on ground-based detections of the subtle, periodic dimming of light from its host star as the planet transits, or passes, in front of the star.

During a transit, some of the starlight is blocked by the planet completely (causing the overall dimming) and some passes through the planet’s atmosphere. Because different gases absorb different combinations of colours, researchers can analyse small differences in brightness of the transmitted light across a spectrum of wavelengths to determine exactly what an atmosphere is made of.

With its combination of an inflated atmosphere and frequent transits, WASP-39 b is an ideal target for transmission spectroscopy. The team used Webb’s (NIRSpec) to make this detection. 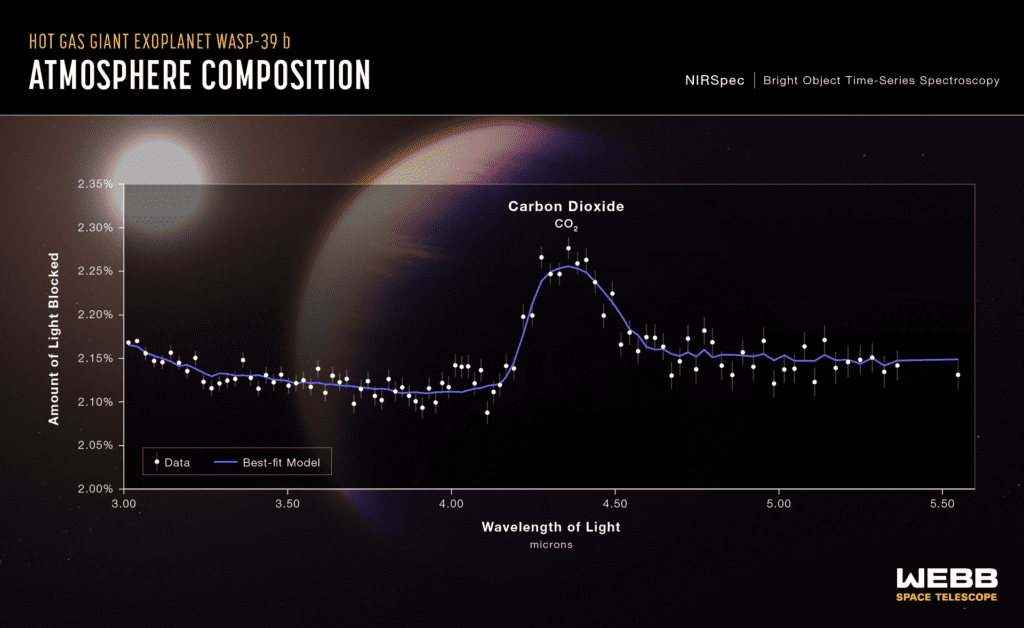 A transmission spectrum of the hot gas giant exoplanet WASP-39 b captured by Webb’s (NIRSpec) on July 10, 2022, reveals the first definitive evidence for carbon dioxide in a planet outside the Solar System. (Credit: NASA/ESA/CSA/L. Hustak/J. Olmsted/STScI)

What the discovery team saw was extremely impressive. A significant signal – an absorption feature – was detected at wavelengths between 4.1 and 4.6 microns in the infrared. It is the first clear, detailed, indisputable evidence for carbon dioxide ever detected in a planet outside the Solar System.

“I was absolutely blown away,” said Benneke, a UdeM physics professor and member of the transiting exoplanet team, who worked on the conception of the observing program and the analysis of the NIRSpec data with UdeM graduate students Louis-Philippe Coulombe, Caroline Piaulet, Michael Radica, and Pierre-Alexis Roy and postdoctoral researcher Jake Taylor.

“We analysed the data here in Montreal and saw this whopping huge signature of carbon dioxide: 26 times stronger than any noise in the data. Before JWST, we were often digging through the noise, but here we had a perfectly robust signature. It is like seeing something clearly with your own eyes.” 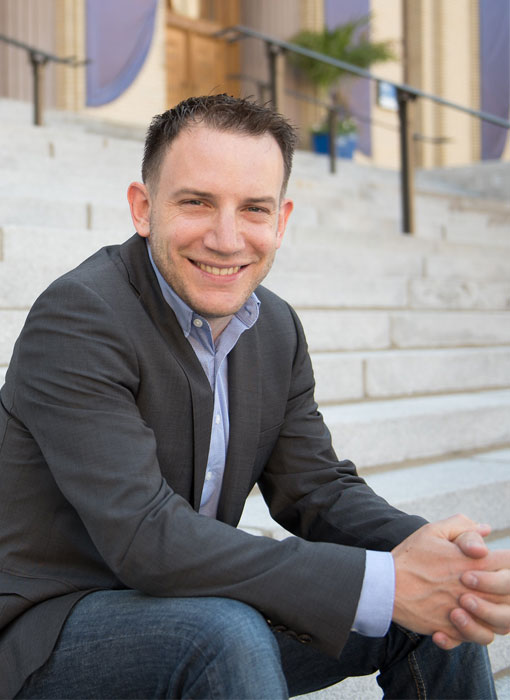 Björn Benneke, Professor at the Université de Montréal and iREx, is a key member of the team that discovered the first definitive carbon dioxide signature in an exoplanet atmosphere. (Credit: A. Philibert/UdeM)

No observatory has ever measured such subtle differences in the brightness of so many individual infrared colours in an exoplanet transmission spectrum before. Access to this part of the spectrum, from 3 to 5.5 microns, is crucial for measuring abundances of gases like water and methane, as well as carbon dioxide, which are thought to exist in many different types of exoplanets.

“Detecting such a clear signal of carbon dioxide on WASP-39 b bodes well for the detection of atmospheres on smaller, terrestrial-sized planets,” said Batalha, the program’s Principal Investigator.

“On Earth,” added Benneke, “carbon dioxide plays such an important role for our climate, and we are used to seeing its spectroscopic signatures here. Now, we are seeing this signature on a distant world. This really drives home the message that these exoplanets are real worlds: as real as Earth and the planets in our Solar System.”

The James Webb Space Telescope is the world’s premier space science observatory. Webb will solve mysteries in our solar system, look beyond to distant worlds around other stars, and probe the mysterious structures and origins of our universe and our place in it. Webb is an international program led by NASA with its partners, ESA (European Space Agency) and the Canadian Space Agency.

“Identification of carbon dioxide in an exoplanet atmosphere,” by the JWST Transiting Exoplanet Community Early Release Science Team, was published online on arXiv today and will be published on Sept. 2, 2022 in Nature.