Discovering an exoplanet around AU Mic 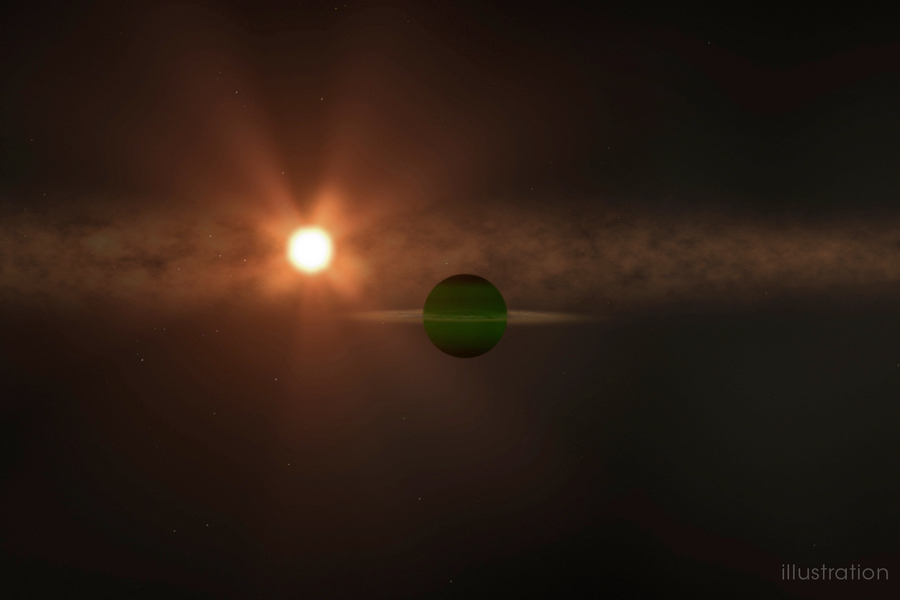 An exoplanet the size of Neptune has been discovered around the young star AU Microscopii, thanks in part to the work of Jonathan Gagné, a former iREx Banting postdoctoral researcher who is now a scientific advisor at the Rio Tinto Alcan Planetarium.

Astrophysicists have been searching for exoplanets in this system, a unique laboratory for studying planetary formation, for more than a decade. The breakthrough, announced today in Nature, was made possible in part by NASA’s TESS and Spitzer space telescopes.

Located about 32 lightyears from Earth, AU Microscopii, or AU Mic, is a young star between 20 and 30 million years old, which is about 180 times younger than our own Sun. In the 2000s, it was found to still be surrounded by a large disc of debris, a remnant of its formation. Since then, astrophysicists have been actively searching for planets around AU Mic, since it is within such discs of dust and gas that they form.

“AU Mic is a small star, with only about 50 per cent of the Sun’s mass,” said Gagné, who participated in the observations and data processing. These stars generally have very strong magnetic fields, which make them very active. That explains in part why it took nearly 15 years to detect the exoplanet, called AU Mic b. The numerous spots and eruptions on the surface of AU Mic hampered its detection, which was already complicated by the presence of the disc.”

Jonathan Gagné at the summit of Mauna Kea, where astrophysicists have been making observations since 2010 at the NASA’s Infrared Telescope Facility (IRTF) to find planets around AU Mic. (Credit : J. Gagné)

In 2010, a team led by Peter Plavchan, now an assistant professor at George Mason University, began observing AU Mic from the ground using NASA’s Infrared Telescope Facility (IRTF). The telescope operates in the infrared, where the team hoped to see the signal of the planet better, since the star’s activity is less intense in this type of light.

For his part, Gagné made numerous observational trips to the IRFT during his doctoral studies. That is when he became involved in the project.

“A few years after I joined the team, we noticed a possible periodic variation in the radial velocity of AU Mic,” he recalled. “We were thus made aware of the plausible presence of a planet around it.”

As a planet orbits, its gravity tugs on its host star, which moves slightly in response. Sensitive spectrographs such as the one on the IRTF can detect the star’s radial velocity, its motion to-and-fro along our line of sight.

Space telescopes to the rescue

The accuracy of the data obtained on the ground was unfortunately not sufficient to confirm without a doubt that the signal was due to an exoplanet. It’s thanks to the transit method, a different detection technique, that the team was finally able to confirm the presence of AU Mic b.

A transit occurs when a planet passes directly between its host star and the viewer, periodically hiding a small fraction of its light. Astronomers observed two transits of AU Mic b during NASA’s Transiting Exoplanet Survey Satellite (TESS) first mission, in the summer of 2018. They then observed two more with NASA’s Spitzer Space Telescope in 2019.

Since the amount of light blocked depends on the size of the exoplanet and its distance from its star, these observations allowed scientists to determine that AU Mic b is about the size of Neptune, and that it passes in front of its star every 8.5 days.

Thanks to previous ground-based observations, the team also has a partial constraint on the mass of AU Mic b. Combining IRTF’s observations with data obtained at the European Southern Observatory in Chile and the W. M. Keck Observatory in Hawai’i, they concluded that its  mass is less than about 3.4 times the mass of Neptune (or 58 times that of Earth). 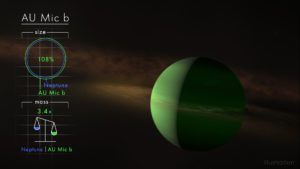 Artist’s rendition of AU Mic b, a planet similar in size to Neptune, but possibly more massive (at most 3.4 times the size of Neptune, according to ground observations).  (Credit: NASA Goddard Space Flight Centre) 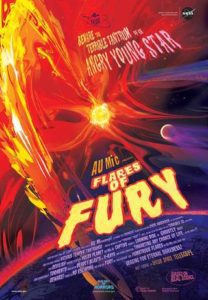 The surface of small stars like AU Mic is often covered with sunspots and stellar flares, making the detection of planets around them very challenging. NASA has featured this stormy AU Mic in a poster from its popular “Galaxy of horror” collection, images that are inspired by scientific facts. (Credit: NASA-JPL/Caltech)

AU Mic provides a unique laboratory to determine how exoplanets and their atmospheres form, and how they interact with the disc of debris and gas from which they are born.

Scientists are excited about their latest discovery, as very few systems like AU Mic are known. Not only is the detection of exoplanets difficult in these systems, but they are also very rare because a system’s period of planetary formation is relatively short compared to the life of a star.

The AU Mic system is close to Earth and therefore appears brighter, allowing astrophysicists  to observe it with a range of instruments, such as the SPIRou spectrograph.

“This instrument, with its polarimetric capabilities, will allow us to better distinguish the effects of stellar activity, which are often confused with the signal from the planets,” said  Étienne Artigau, a project scientist at Université de Montréal. “This will allow us to determine the mass of AU Mic b accurately and to know if this exoplanet is more like a large Earth or a Neptune twin.”

Other iREx astronomers are enthusiastic about trying to detect the planet’s atmosphere, and see the effect of the active star on it. These observations can also be accomplished with SPIRou.

AU Mic is part of an association of young stars that formed at about the same time in the same place. Beta Pictoris, the star that gives its name to this association, also has a disc and two known planets. Both the star and the planets are however considerably more massive (1.75 times the mass of the Sun, and 11 and nine times the mass of Jupiter, respectively) but they do not appear to have evolved in the same way as AU Mic and its planet. Studying these two systems, which have many characteristics in common, scientists can compare two very different scenarios of planetary formation.

Many surprises undoubtedly still hide within AU Mic’s system, the iREX researchers believe. Will further observations of the system with TESS confirm the existence of other planets? Is the atmosphere of the planet outgassing because of the strong stellar activity? How does this system compare to others of the same age? Those are all questions for future study. 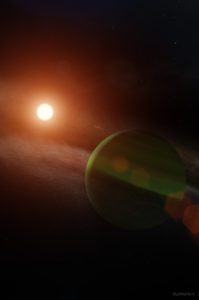 “A planet within the debris disk around the pre-main-sequence star AU Microscopii” was published on June 25, 2020 in Nature. In addition to Jonathan Gagné (iREx, Université de Montréal, Space for Life), the research team includes first author Peter Plavchan from George Mason University; second author Thomas Barclay, an associate research scientist at the University of Maryland, Baltimore County and an associate project scientist for TESS at NASA’s Goddard Space Flight Center in Greenbelt, Maryland; and 82 other co-authors, including former iREx member David Berardo, now a PhD student at MIT.