First images for the NIRPS spectrograph 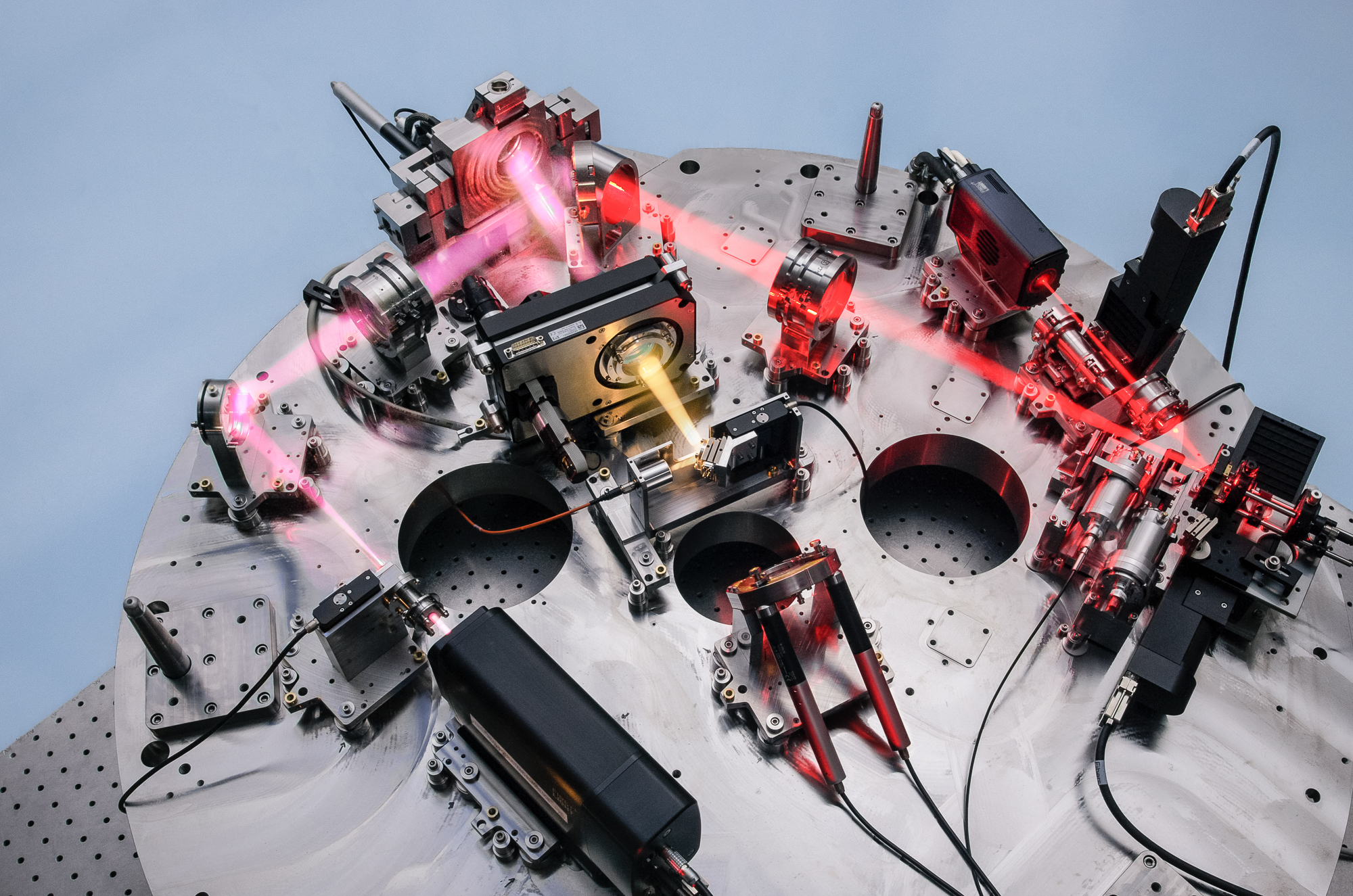 The NIRPS spectrograph, whose design is led by a team from the Observatoire du Mont-Mégantic (OMM), the Centre d’optique photonique et laser (COPL) and the Institute for Research on Exoplanets (iREx), in association with engineers from the NRC Herzberg Institute of Astrophysics, obtained its very first images in August in the Université Laval’s laboratory. This is an important step before the instrument is installed on the 3.6-m telescope in La Silla, Chile, and can begin its study of exoplanets.

NIRPS (Near InfraRed Planet Searcher) is a spectrograph built by an international collaboration led by René Doyon, Director of both the OMM and iREx, and François Bouchy, Université de Genève’s Observatoire astronomique. Operating in infrared light, NIRPS is optimised to study Earth-sized exoplanets orbiting cooler stars. It should be in operation in 2021 at the 3.6-meter telescope at La Silla, Chile, operated by ESO (European Southern Observatory).

“We’ve been working on NIRPS for five years,” explains Étienne Artigau, iREx Researcher and NIRPS Project Scientist. “It is very motivating for the scientific team to realise that we are no more than a few months away from starting the search for exoplanets with this instrument. »

The instrument’s assembly was carried out over the spring and part of the summer of 2020 at Université Laval laboratories under the supervision of Simon Thibault, Professor at the Université Laval, member of the COPL and iREx Associate Member. The team then began the instrument’s first “thermal cycle” on July 31. This step consists of assembling all the optical elements and aligning them with great precision in the cryostat, an enclosure that keeps the instrument at very cold temperatures. 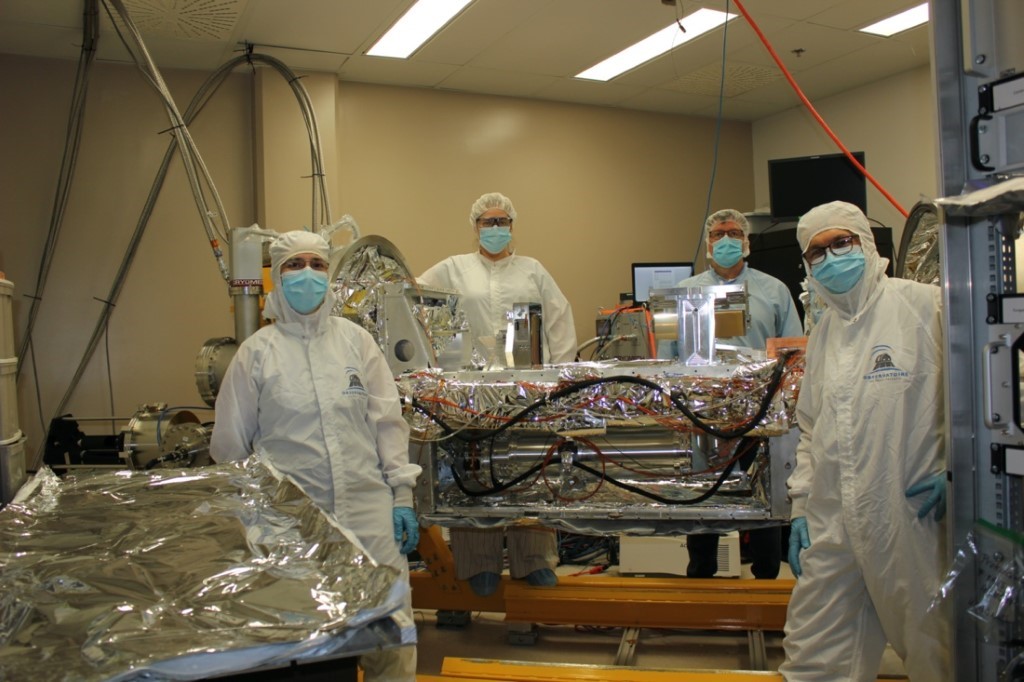 The spectrograph is made up of five zinc selenide (ZnSe) prisms, an optical material ideal for infrared observations. It separates light into an infrared rainbow invisible to the naked human eye ranging from 0.97 to 1.81µm.

“It’s quite a puzzle to assemble the instrument,” says Philippe Vallée, Instrumentation Specialist at the Observatoire du Mont-Mégantic. “You have to understand that all components are installed at room temperature. Glass parts shrink much less than aluminum parts when they cool down. One small error in calculation or assembly, and it all goes crack when cooling to cryogenic temperatures! »

Philippe Vallée, OMM Instrumentation Specialist, working on the instrument. On the left, he is gluing the mechanical supports on the sides of a ZnSe prism. The spectrograph is composed of 5 prisms like this one. On the right, we see him making adjustments on the H4RG detector. (Credit: L. Malo)

“After integrating the subsystems on the optical bench, we have to make sure that everything is in place according to the positioning tolerances provided. This is the first step,” explains Anne-Sophie Poulin-Girard, a Research Professional at COPL. “This is a critical step to ensure that the system will have the desired performance. Fortunately, we have 3D measuring machines that allow us to verify the mechanical positioning, and a range of optical tactics to validate the alignment of the various elements. »

Since NIRPS operates in infrared light, it is crucial that it is cooled down to about -200 degrees Celsius, so that it does not itself emit light that would pollute the data. Cooling is a delicate procedure that takes almost two weeks to complete.

The team was able to take the first images with the instrument on August 12. As the instrument is not yet on the telescope, the images did not capture the light of a star, but rather with that of calibration lamps. 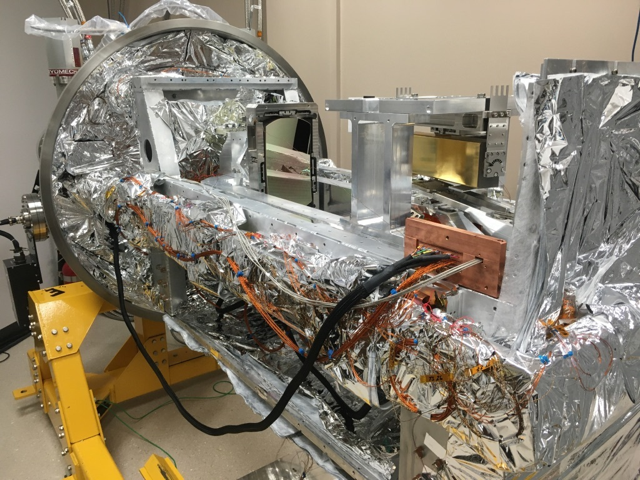 The NIRPS instrument in the COPL laboratory. The small golden square is a diffraction grating that allows light to be decomposed. The copper plate on the right side hosts the optical fibers that transmit the light to the instrument. In the laboratory, this light is emitted by calibration lamps, but it will eventually be replaced by starlight collected by the telescope. (Credit: L. Malo)

Among the first images of NIRPS is the image below, which shows the light of a calibration lamp spread across the detector. In the image, each of the arcs corresponds to a portion of the infrared light. A gradient of red tones has been chosen to represent this light, which is however invisible to the human eye.

Light from a calibration lamp spread across NIRPS’ detector. Each small arc is a portion of the electromagnetic spectrum.

The spectrograph is the third and last part of NIRPS to be tested before being sent to La Silla. The interface mount between the telescope and the fiber link, which includes the adaptive optics module, has already been delivered by a team of researchers from Geneva Observatory, as has the fiber link, whose design was led by a team from the Instituto de Astrofísica de Canarias.

NIRPS is the little sister of SPIRou, a high-resolution infrared spectropolarimeter in operation since 2018. Installed on the Canada-France-Hawaii Telescope, SPIRou has access to the stars of the Northern Hemisphere. The NIRPS instrument, for its part, will be installed in Chile and will therefore have access to the stars of the Southern Hemisphere. At ESO’s 3.6-meter telescope in La Silla, it will join HARPS (High Accuracy Radial velocity Planet Searcher), one of the most successful exoplanet hunters, which has been operating since 2003 in the visible light domain. Like SPIRou, NIRPS will aim to detect exoplanets of Earth-like mass around cool stars, using the radial velocity method (also called velocimetry method). These stars are relatively cold and therefore emit most of their light in the infrared, hence the importance of studying them in this wavelength range. Finding potentially habitable or even inhabited planets similar to Earth would be a monumental discovery in this field.

One of the most important roles of NIRPS will be the monitoring of candidate exoplanets identified by NASA’s TESS (Transiting Exoplanet Survey Satellite) space telescope. This telescope exploits the transit method, which can determine the size of a planet passing in front of its star, but not its mass. Now with its main mission completed, TESS has confirmed the existence of more than 60 exoplanets and identified more than 2000 exoplanet candidates. NIRPS will track these candidates to confirm their existence and constrain their mass. Obtaining both the size and the mass of an exoplanet is of particular interest since it allows scientists to constrain the composition of the exoplanet and thus determine, among other things, whether it is rocky or gaseous.