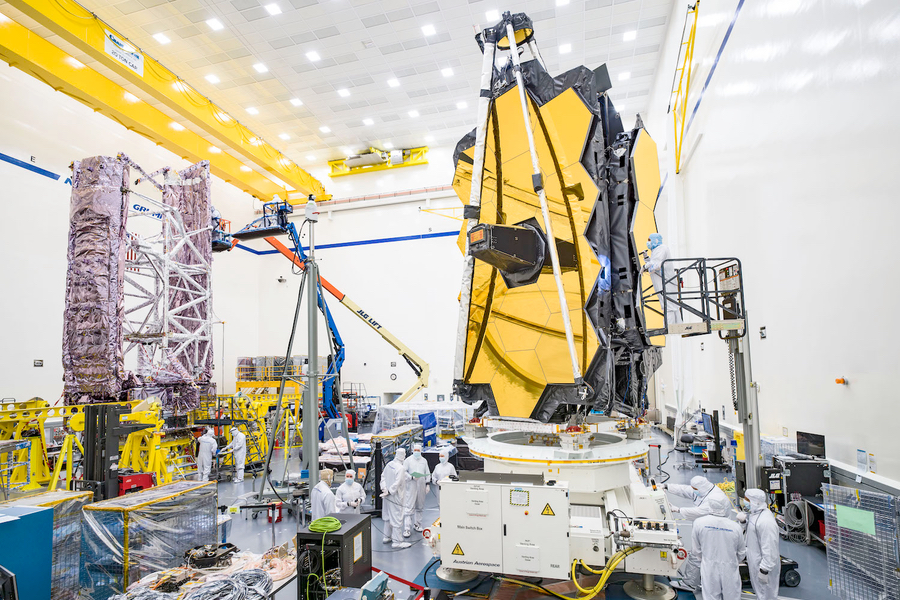 The month of February 2019 saw the James Webb Space Telescope (JWST) successfully pass a series of tests meant to simulate the extreme conditions of a rocket launch into space. These tests were especially important, as they were the tests that unfortunately revealed problems with the spacecraft’s sunshield hardware in April 2018 that lead to the recent launch reschedule to March 2021.

During Webb’s launch, the European Space Agency’s Ariane 5 rocket will generate extremely energetic sound waves and powerful vibrations from which Webb will need to be protected. While housed in Redondo Beach, California, one of NASA’s key contractors for this project — Northrop Grumman — subjected Webb’s spacecraft element to intense sound waves and vibrations to mimic these brutal launch conditions.

“[I]ts launch acoustic environment is about 10 times more sound pressure, 100 times more intense and four times louder than a rock concert.” says Paul Geithner, deputy project manager – technical for JWST at NASA’s Goddard Space Flight Center (GSFC) in Greenbelt, Maryland. Since Webb will be operating at a location 1.5 million kilometres away from Earth and will not be serviceable or repairable during its lifetime, it is imperative that all testing before launch be performed thoroughly.

Webb’s spacecraft element only accounts for half of the entire observatory. The second half consists of the telescope elements which includes Webb’s scientific instruments. Recall that the Canadian JWST team delivered their scientific instrument and Webb’s guiding camera, the FGS/NIRISS unit, to NASA’s GSFC in 2012.

With this crucial step now behind them, the team of technicians and engineers testing Webb’s spacecraft element will soon be moving on to thermal vacuum testing, where the harsh temperatures and vacuum of space will be simulated. The spacecraft element will then be reunited with the observatory’s second half, the telescope elements, where both halves will be integrated together for a final round of testing.

Webb is an international project involving NASA, the Canadian Space Agency (CSA) and the European Space Agency (ESA). In Canada, the JWST project is lead by iREx Director, Prof. René Doyon. In exchange for its contributions to the mission, Canada will be receiving 450 hours of guaranteed observing time in the first few years of the telescope’s operations. This time has already been divided between nine scientific programs spanning a wide gamut of observing targets including exoplanets, brown dwarfs and very distant galaxies. Many of these programs are lead by or involve iREx members such as David Lafrenière, Étienne Artigau and Loïc Albert. In addition, Canada will also be receiving 5% of Webb’s general observing time throughout the mission lifetime.

Once launched, the JWST will be the world’s premier space science observatory. Its development and scientific mission are intimately linked to those of the Institute for Research on Exoplanets. Stay tuned as we continue tracking Webb’s journey towards launch!