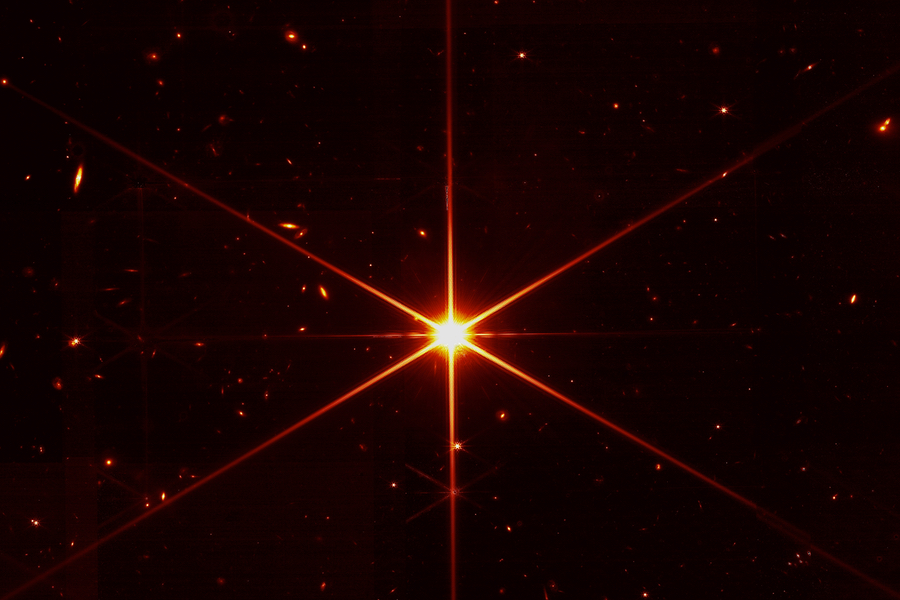 An image of the star 2MASS J17554042+6551277 and many background galaxies taken by Webb's NIRCam instrument showcases that the telescope's optics are working successfully. (Credit: NASA/STScI)

The Webb Telescope’s commissioning has been progressing remarkably well since the space observatory arrived at its final destination, 1.5 million kilometres from Earth, fully unfolded in late January. As its instruments have turned on and its mirror segments have begun aligning, the Webb team is incredibly pleased to say that the telescope is working even better than expected!

Webb’s iconic 6.5-metre wide primary mirror is made up of 18 hexagonal segments which were locked during the telescope’s launch to prevent them from getting damaged. During deployment and commissioning, the segments were unlocked in order to be very precisely aligned for them to work together as a single unit. A star near the constellation Ursa Major, HD 84406, was used to perform this operation.

(Left) A single star appears as 18 distinct unfocused points as Webb’s 18 different mirror segments observe it before being properly aligned. The Webb team identified which point is associated with which mirror segment in order to properly align them and have them working as one. (Right) Once this step was completed, the observed star, HD 84406, appeared as a single point in the centre of the image. (Credit: NASA)

A comparison of the same field of view as seen by the Spitzer Space Telescope’s IRAC camera and the Webb Telescope’s NIRCam instrument. (Credit: NASA)

When first observed, the single star appeared as 18 separate smeared points since each segment was not aligned and was working independently. The Webb commissioning team then adjusted each segment until all 18 points were neatly stacked at the centre of the image as a single very sharp point. This signified that the segments were all working together as one.

On March 16th 2022, NASA released Webb’s alignment evaluation image which concretely showed that the telescope’s optics were working in line with the mission’s best predictions or better. This image showed an incredibly sharp view of a star, 2MASS J17554042+6551277, with six diffraction spikes, due to the shape of the primary mirror and the secondary mirror’s support. Perhaps more impressive still were the many background galaxies that were scattered throughout the image. A comparison of this piece of the sky as seen from the now-retired Spitzer Space Telescope, which also looked at infrared light, and Webb’s view showcases the new observatory’s much greater resolution in this type of light. 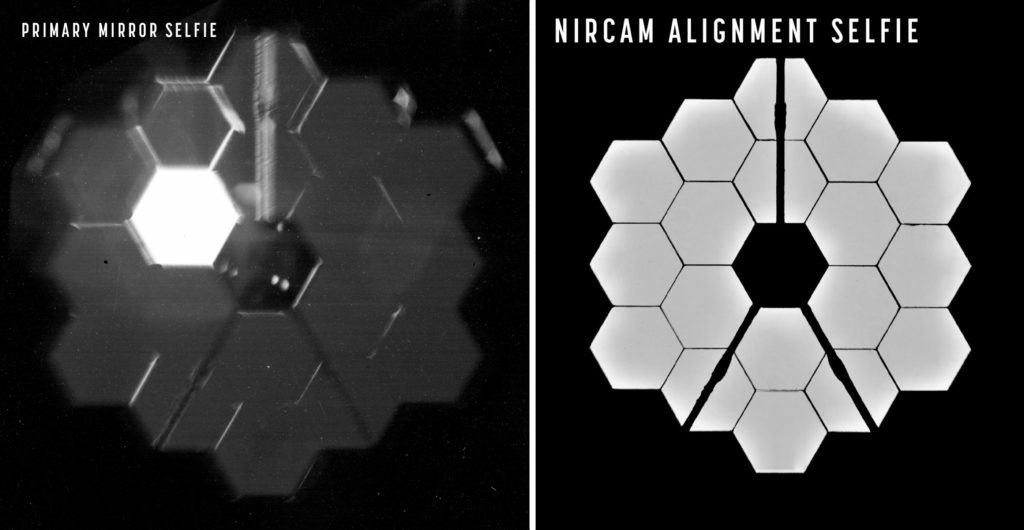 Webb snapped a selfie of its primary mirror before (left) and after (right) its mirror segments are aligned. (Credit: NASA)

Astronomers and members of the public alike were also treated with Webb’s selfies during the images releases related to the telescope’s mirror alignment. These selfies were created using a specialised pupil imaging lens inside the NIRCam instrument that was designed to take images of the primary mirror segments instead of images of the sky. This configuration is not used during Webb’s scientific operations and is used strictly for engineering and alignment purposes. In Webb’s first selfie, prior to the mirror segments’ alignment, one particular segment is lit up as it is the one correctly pointed towards the target star. In the latest selfie, all of Webb’s 18 primary mirror segments are shown collecting light from the same star in unison.

Now that Webb’s primary mirror is aligned with the NIRCam instrument, the Webb team will continue fine-tuning this alignment to work with all of Webb’s instruments including the Canadian FGS/NIRISS instrument. As the telescope continues cooling down to its optimal working temperature of only 40 degrees above absolute zero (and colder still for the MIRI instrument), testing and calibration of the instruments will be ongoing.