The NIRPS Spectrograph – Interview with our astronomers 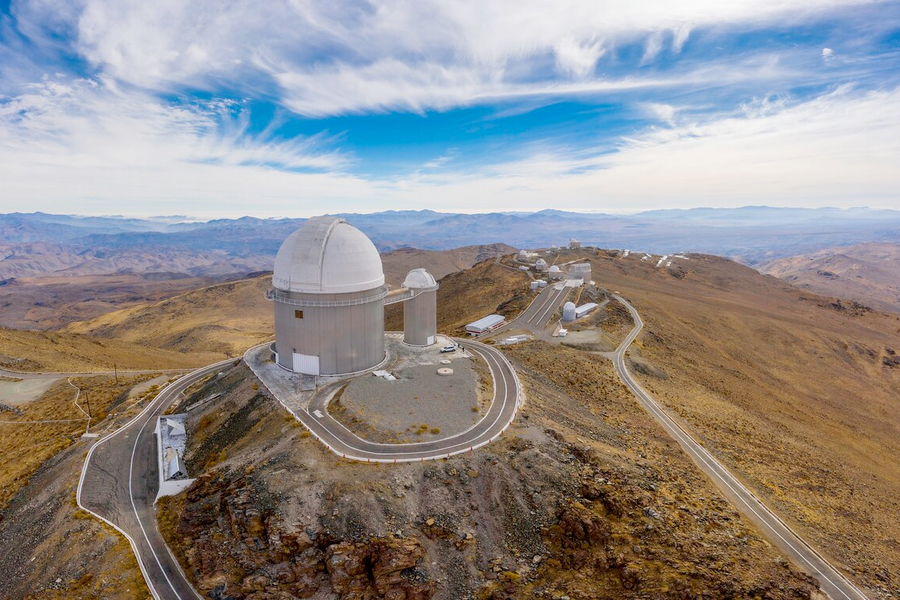 The Near InfraRed Planet Searcher (NIRPS) is an instrument that was recently installed at the 3.6-metre telescope at the La Silla Observatory in Chile. Its design was carried out by an international collaboration led by the Observatoire du Mont-Mégantic (OMM), the Institute for Research on Exoplanets at the Université de Montréal and the Observatoire astronomique de l’Université de Genève in Switzerland.

The Canadian team, which also includes the Herzberg Research Centre for Astronomy and Astrophysics of the National Research Council of Canada and the Centre d’optique, de photonique et de lasers (COPL) of the Université Laval, contributed to the conception and design of the NIRPS spectrograph. Professor Simon Thibault and his team, in collaboration with the OMM and iREx team, conducted mechanical and optical tests at the COPL laboratories. 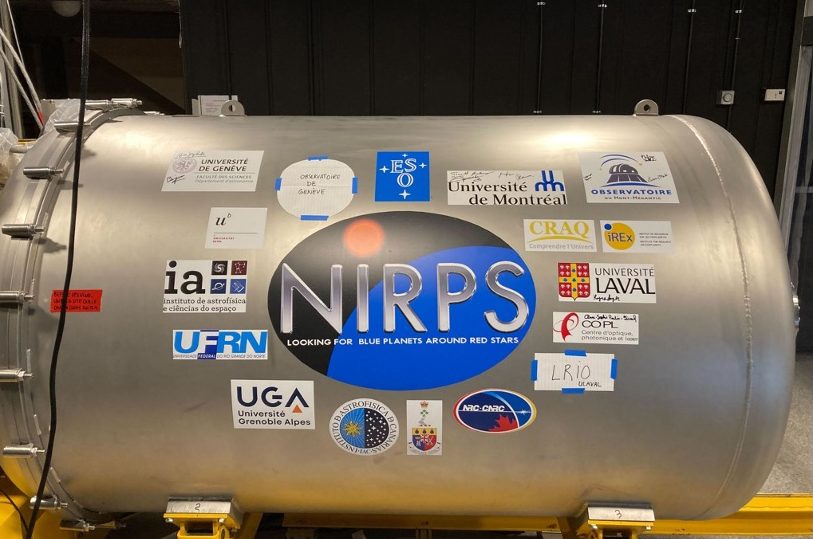 In January 2022, the NIRPS spectrograph was ready for its long journey. It left the Université Laval laboratories and went to Chile, finally reaching the La Silla Observatory in March.

The installation and testing phase of the spectrograph then began. Anne-Sophie Poulin Girard, Hugues Auger, and Guillame Alain from the Université Laval, accompanied by Benjamin Kung, Alex Segovial, and François Wildi from the Observatoire astronomique de l’Université de Genève, as well as Frédérique Baron, Philippe Vallée, Étienne Artigau, and Charles Cadieux from the OMM and iREx, visited the observatory site to install the instrument and make it operational before it could observe the sky for the first time.

We asked Étienne Artigau, Charles Cadieux, and Frédérique Baron, iREx astronomers who participated in these installation and testing activities, a few questions. 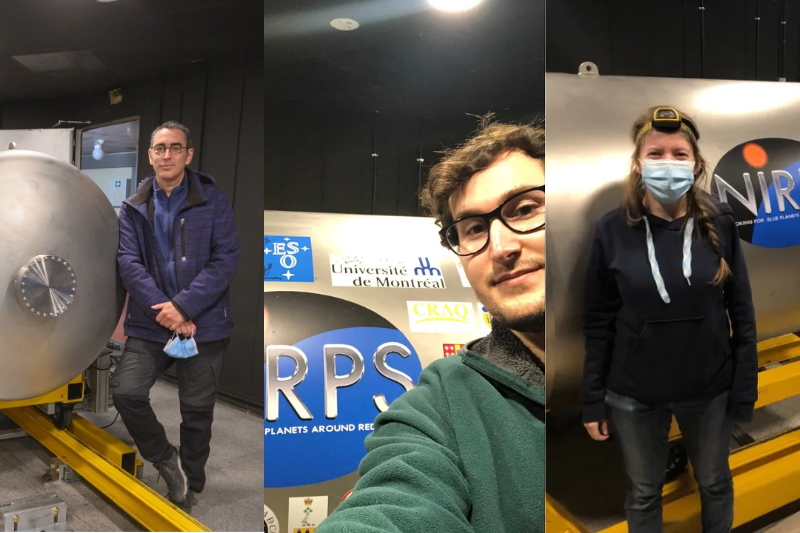 iREx: Why did you go to Chile? What is your role in this project?

Étienne: I am a researcher at the Université de Montréal and I am the Project Scientist of the NIRPS instrument. I coordinate the scientific projects on the instrument. I am also very involved in the data analysis and the transformation of the data that are taken with NIRPS into usable measurements for astronomical research. However, it is not in this capacity that I participated in the mission last April. My role was to assist Philippe Vallée, mechanical specialist, in the very last tests before cooling the instrument for the first time.

Charles: I am a Ph.D. student in astrophysics at the Université de Montréal and a member of the NIRPS scientific collaboration. I went to Chile, more precisely to the La Silla Observatory, as part of the NIRPS installation. My Ph.D. project is dedicated to the study of small temperate exoplanets. In particular, I try to measure their mass and composition, which requires observations with an instrument such as NIRPS.

Frédérique: I am the Deputy Manager of the NIRPS project. I went to Chile to participate in the first phase of the installation of NIRPS. In particular, with Alex Segovia, we installed and tested the different electronic devices that allow to control the systems installed in the cryostat, the sealed chamber that maintains the instrument at very low temperatures.

iREx: Tell us about your trip!

Étienne: It started very badly! Because of the COVID pandemic, I had to do the PCR test before my departure… and my test was lost by the laboratory! After a few anxious moments spent on the phone, they were able to find a rapid test I could do at the airport. Once in Santiago, I was finally able to get out of the airport hotel, go to the Observatory Residence that welcomes visiting astronomers, and enjoy the city a bit. The next day, I left for the La Silla Observatory: a 500 km flight to La Serena, a 2 hour drive by truck, and finally arriving at the observatory.

Once there, all the days are similar and nothing marks the passage of time. We get up around 7 am, and we must not make too much noise, because there are colleagues who have just gone to bed in the neighbouring rooms! There is breakfast in the Observatory cafeteria, and we then go to the telescope to work on the instrument. 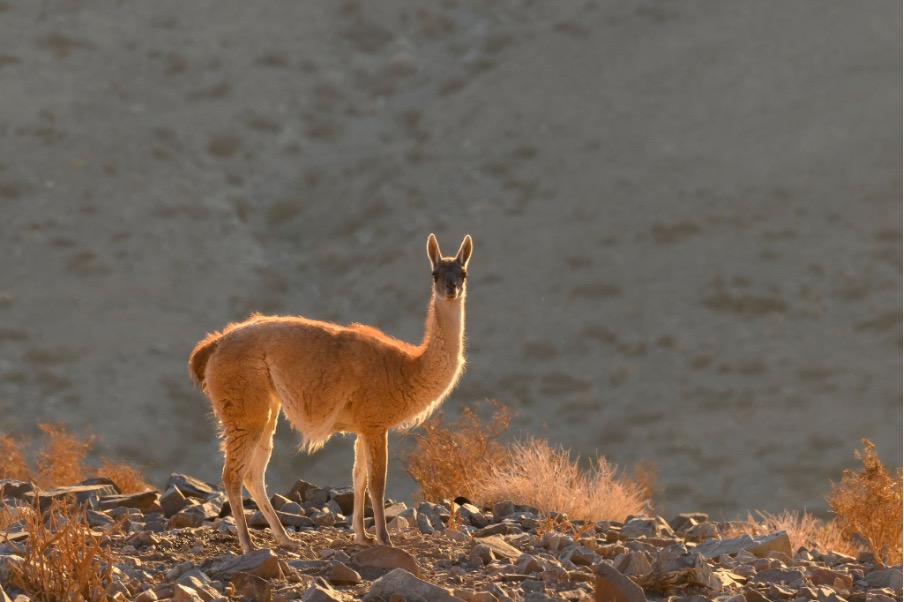 A guacano at the La Silla Observatory. (Credit: É. Artigau)

The Observatory site at La Silla is quite large, and the telescope is about 2km from the dormitory. A car is at our disposal, but we try to make the walk when the weather allows it. There are guanacos  everywhere in the surroundings and it is an absolutely magnificent setting!

There are a lot of small tasks that need to be done on the NIRPS instrument. At the time of my visit in April, the vacuum had been established inside the cryostat, and we were getting ready to start the cooling phase to get the spectrograph temperature down to near -200℃. The slightest leak in the cryostat could seriously jeopardize the project, so we made sure to eliminate them all!

In the evening, I participated in the observations with the technicians during the first half of the night several times. This was very helpful for me, as we will be conducting many nights of observations over the next five years, both in person and remotely.

Charles: This was my first time at the Observatory, where I spent two weeks. A good part of my time was spent learning the operation of the 3.6-metre telescope, the largest on-site, where NIRPS is installed. I familiarised myself with the control room of the instrument, where the observation and calibration sequences are launched. During my stay, I performed, amongst other things, routine checks of the NIRPS cooling system, optimised the calibration sequence of the instrument, and helped to realign the entrance of one of the optical fibers, a crucial operation to ensure the proper functioning of NIRPS.

iREx: What interests you about this project? What do you find most exciting?

Étienne: In exchange for the design of the instrument, our team got 720 nights spread over five years, which is absolutely huge! This will allow us to do what no other team in the world can afford to in terms of scale of observing projects.

Data analysis is also a lot of fun for me! It’s like doing a Wordle or a Sudoku, but on a much larger scale. We know that the signal of a planet that could harbor life is hidden in terabytes of data… we just have to decipher it.

Charles: The NIRPS will be one of the most powerful infrared spectrographs in the world. It will also be possible to operate the NIRPS simultaneously with the world-renowned HARPS spectrograph, a complementary instrument sensitive to visible light, which has been in operation for many years at the same telescope. Simultaneously obtaining the spectrum of a star in visible and infrared light makes it easier to identify signals related to its magnetic activity, which can sometimes be confused with signals from exoplanets. The NIRPS + HARPS combo will thus be very efficient to study exoplanets. For example, we will be able to determine the chemical composition of the atmosphere of exoplanets similar to the Earth.

iREx : What was the greatest challenge?

Charles: In my case, the biggest challenge was to quickly learn how NIRPS and the La Silla facility work.

Frédérique: The biggest challenge for me was not during my stay in La Silla, but rather before (and after!). The installation of NIRPS in La Silla required the presence of several people on site in addition to constant interaction with colleagues in Montreal and Geneva. The different phases of the instrument installation required people with different skills, so it was quite a puzzle to coordinate the most optimal schedule. In the end, everything went well and we even finished our work a little ahead of time!

iREx: What did you like most about your experience?

Étienne: The nights are absolutely magical, especially when the Moon sets! The altitude of La Silla is optimal for naked eye observations because the oxygen deficit at higher altitudes makes the eye less sensitive to the faint light coming from the stars. I had fun making timelapse videos to show the vibe of the nights on the mountain.

Charles:  I loved being on site, which is located in the middle of the desert at an altitude of 2400 metres. I had great meetings with astronomers from all over the world. It was a great honour to have participated in the preparation phase of NIRPS.

Frédérique: The sky ay La Silla is absolutely magnificent! Being used to the Observatoire du Mont-Mégantic, I particularly appreciated being able to look at the stars outside without being cold!