The Universe as seen by Webb 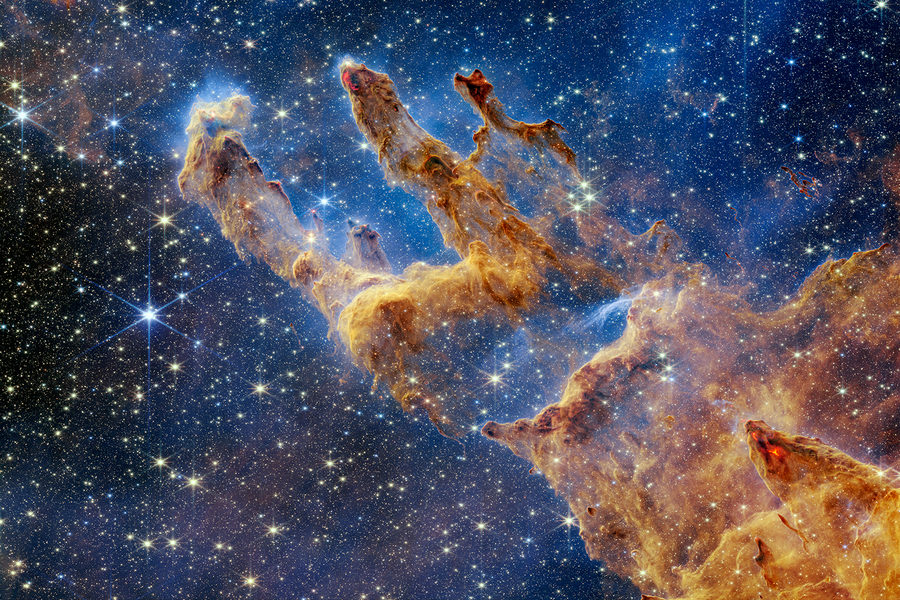 An image of the Pillars of Creation taken by the NIRCam instrument on the Webb Telescope (Credit: NASA/ESA/CSA/STScI)

Since the reveal of its first images (and one exoplanet spectrum!) on July 12, 2022, the Webb Space Telescope has not stopped dazzling the world with its new images and discoveries. Here is an overview of some of its most amazing snapshots of the Universe released over the last few months. 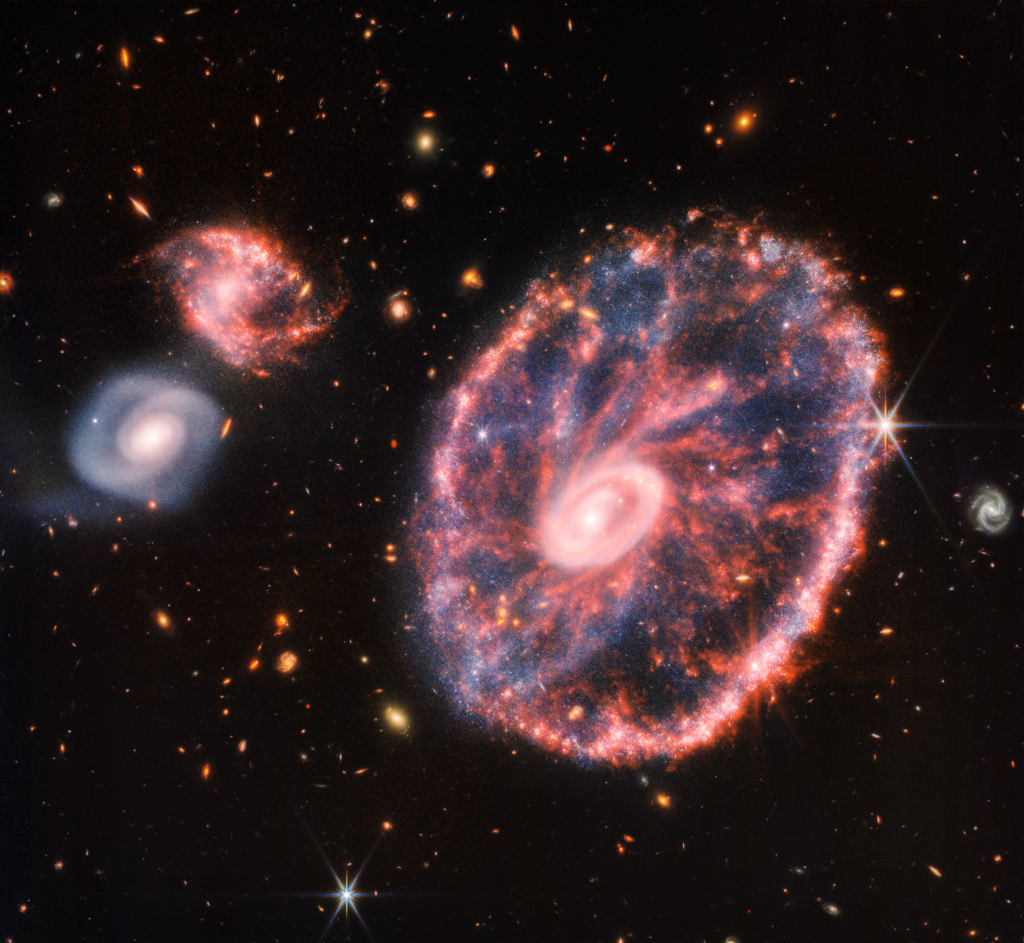 This image of the Cartwheel Galaxy (right) and its companion galaxies (left) was taken by both Webb’s NIRCam (in the near-infrared) and the MIRI (in the mid-infrared) instruments. This is a rare type of galaxy called a ‘ring galaxy’. Its characteristically bright ring around its perimeter is a region of strong star formation that was ignited by a recent interaction with a close-by galaxy. There is also a second ring around the centre of the galaxy. Despite the sometimes violent forces at play during galaxy interactions, the Cartwheel Galaxy still retains its beautiful spiral structure.

Direct imaging of the exoplanet HIP 65426 b 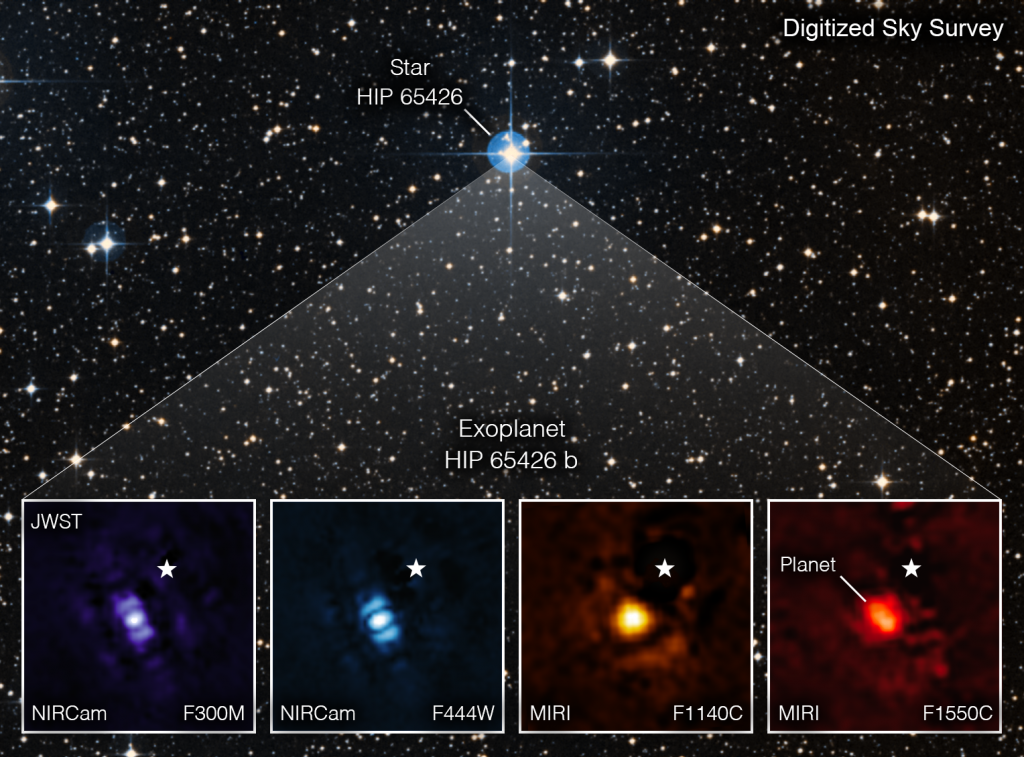 Part of our Institute’s strong heritage in the field of exoplanets stems from two of our members, Profs. René Doyon and David Lafrenière, taking the first ever direct image of an exoplanetary system, HR 8799. This accomplishment, performed in 2008 with their colleague Christian Marois (NRC Herzberg), cimented Canada as a powerhouse in exoplanet research. The Webb Telescope continues that legacy with many of its own direct imaging programs for exoplanets. The first direct image was released in September 2022 using both the NIRCam and MIRI instruments. The featured exoplanet, HIP 65426 b, is a gas giant planet seven times more massive than Jupiter. Using its coronography technique (masks within the instruments that block out the central star), Webb may be able to take direct images of planets the size of Saturn or even smaller!

Neptune and its moons 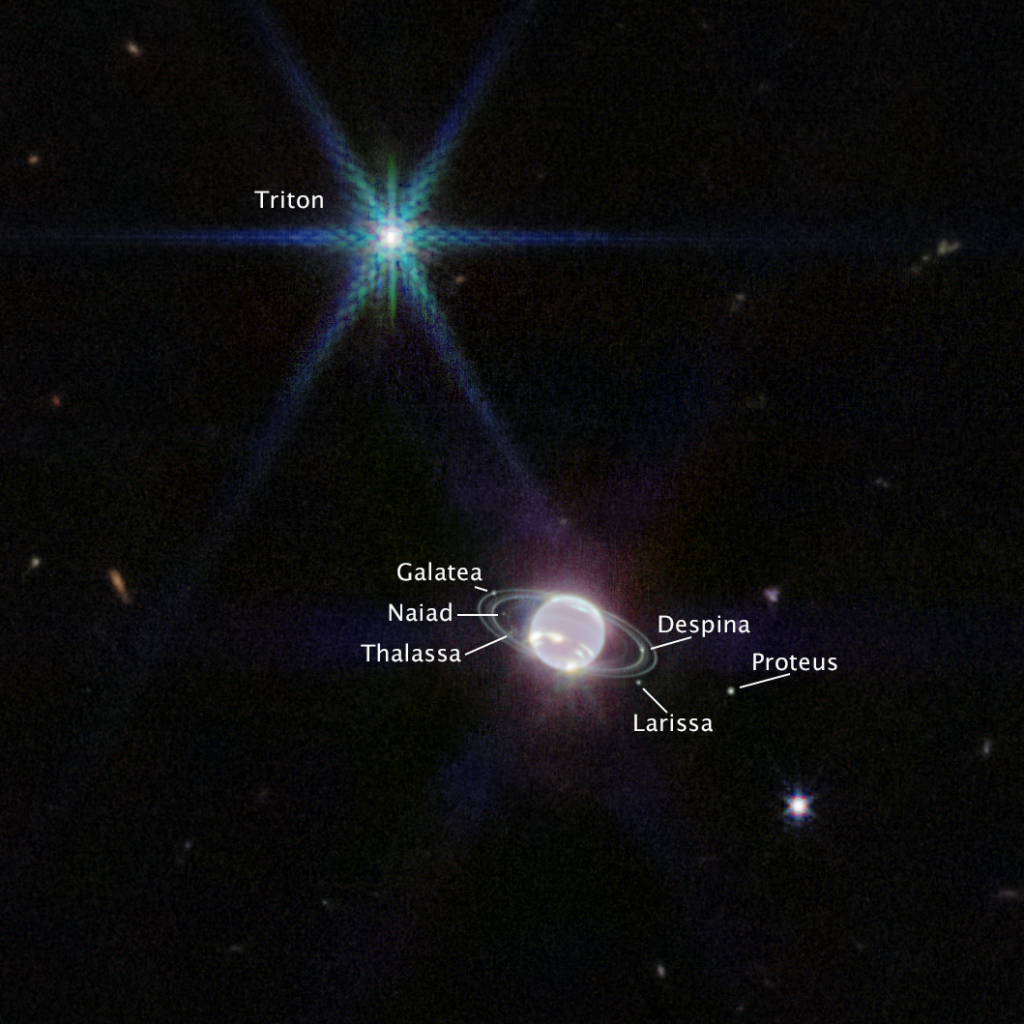 Uranus and Neptune are the only two planets in our System Solar who have not had dedicated probe missions visit them. Even Pluto was visited by the New Horizons mission! This makes our two ice giant planets fantastic targets for the Webb Telescope. This image of the planet Neptune, its rings, and seven of it fourteen moons is actually the best snapshot we have taken of this system in over 30 years! Not since the Voyager 2 probe’s fly by in 1989 have we been able to observe these celestial bodies in such detail. Neptune’s largest moon, Triton, actually appears brighter than its parent planet here. This is because it has a highly reflective surface, whereas Neptune’s methane-rich atmosphere absorbs quite a bit of infrared radiation.

You may have heard of NASA’s daring DART (Double Asteroid Redirection Test) mission. In an effort to divert future dangerous asteroids that may be on a collision course with Earth, scientists sent a small probe to a nearby double-asteroid system. The goal was to crash the probe into the smaller of the two asteroids, Dimorphos, and see if its orbit around the larger asteroid, Didymos, had changed. Following the impact on September 26, 2022, telescopes all over the world and in space tracked the evolution of the system and studied ejecta from Didymos. Both the Hubble Space Telescope (left) and the Webb Telescope (right) took part in this massive follow-up campaign. After a few weeks of observations, the mission was deemed a huge success! The orbit of Didymos was changed by 32 minutes, or about 5%, which is 25 times larger than was deemed necessary for a successful mission. 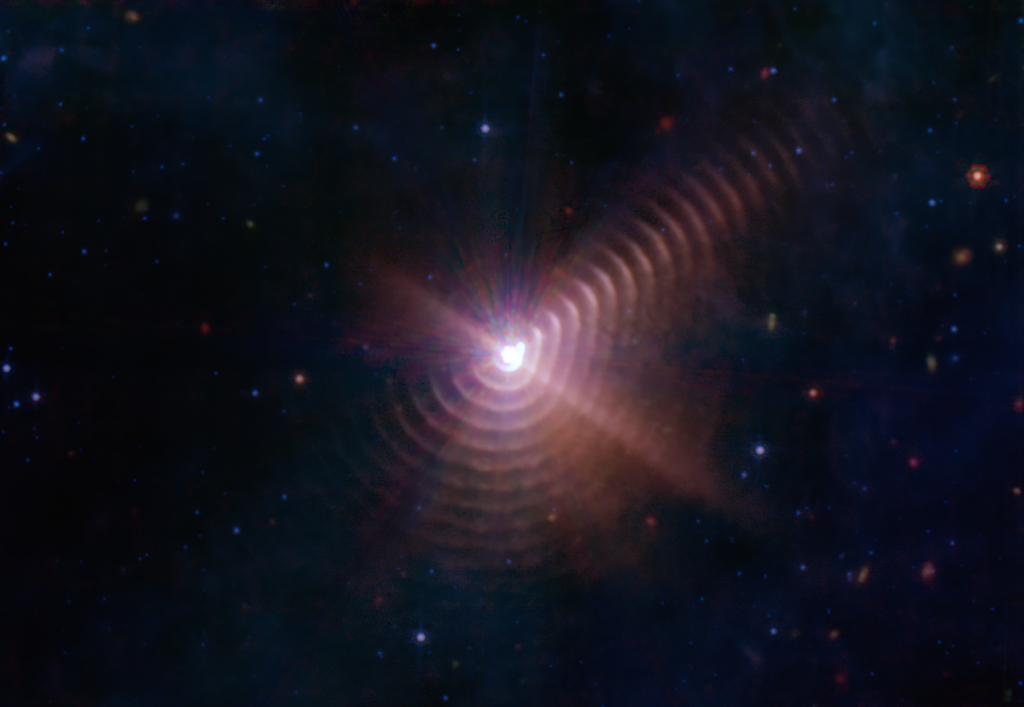 Wolf-Rayet stars are particularly active massive stars that are quickly losing mass as they near the end of their lives. The Webb Telescope and its MIRI instrument recently turned their gaze towards Wolf-Rayet 140, which is part of an interacting pair of stars. As these two bodies orbit each other, Wolf-Rayet 140 ejects shells of dust at regular intervals, when the two stars are the closest to each other. This striking pattern seen in the mid-infrared is akin to tree rings counting back successive eight-year-long orbits of the two stars. Tony Moffat, a Professor Emeritus at the Université de Montréal, was part of the discovery team.

The Pillars of Creation

The Pillars of Creation, a small region in the Eagle Nebula, was first observed by the Hubble Space Telescope in 1995 (and was then revisited in 2014 for a sharper view, as seen on the left). It has become a truly iconic astronomical image, launching many curious minds down a path towards becoming scientists. Using its NIRCam instrument, the Webb Telescope managed to pierce through much of the Pillars’ dust columns and revealed young and newborn stars all throughout the region in an image that was released in October 2022 (right). Glowing crimson cracks in the fingertips of the columns emanate from jets from newborn stars interacting with their surrounding gas. 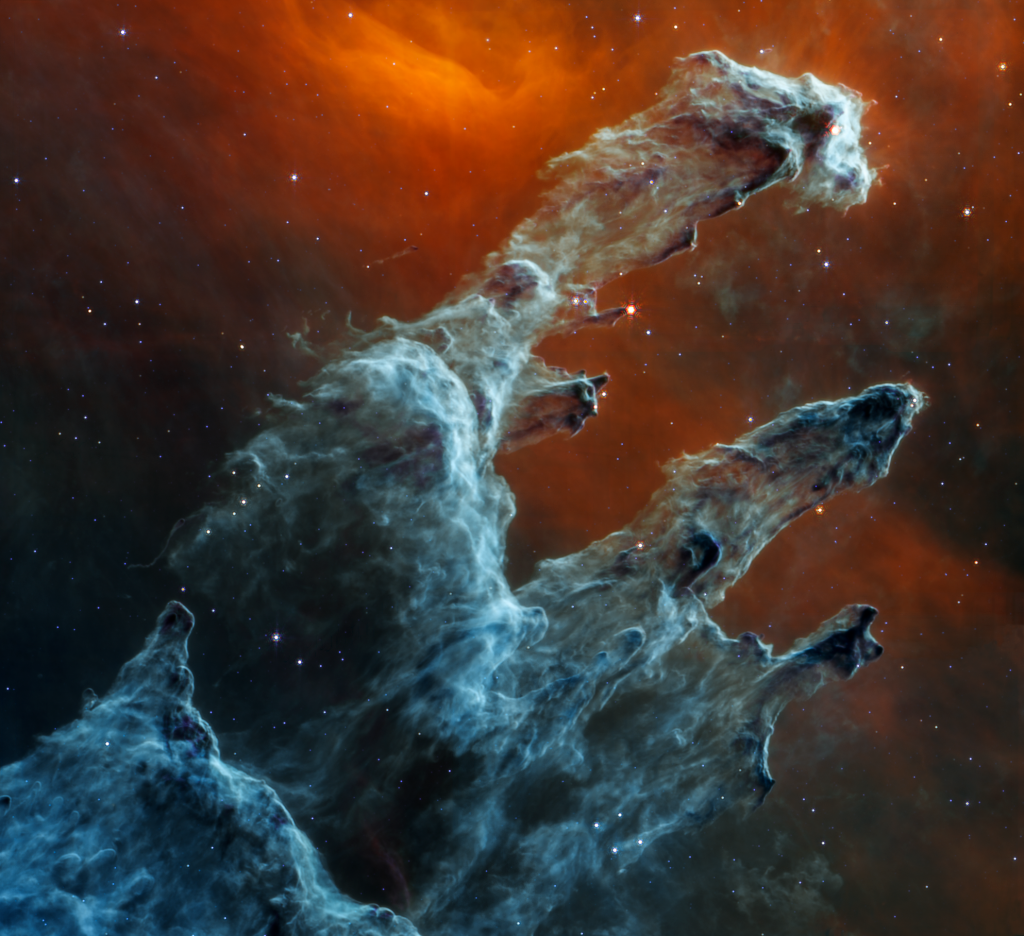 Just in time for Halloween, a MIRI image of the Pillars of Creation was also released. As dust itself, rather than stars, shine brightly in the mid-infrared, we are left with thick layers of the ghostly dust columns within the Pillars in this spooky snapshot.

For a look at the complete gallery of the Webb Telescope’s images and supporting scientific information, please visit the Space Telescope Science Institute’s website.