Massive comet-like object pollutes the atmosphere of a white dwarf 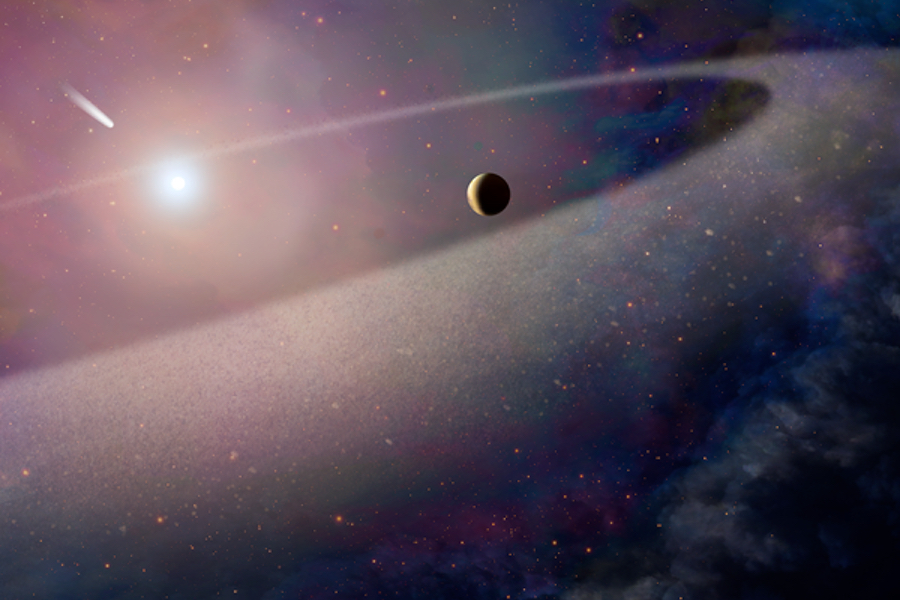 Scientists have witnessed, for the first time, a massive, comet-like object being ripped apart and scattered in the atmosphere of a white dwarf, the burned-out remains of a sun-like star. The destroyed object had a chemical composition similar to Halley’s Comet, but it was 100,000 times more massive than its famous counterpart. It was also rich in the elements that are essential for life, including nitrogen, carbon, oxygen, and sulfur.

The international team of astronomers observed the white dwarf WD 1425+540, which was discovered in 1974, 170 light-years from Earth in the constellation Boötes (the Herdsman). Using the NASA/ESA Hubble Space Telescope and the W. M. Keck Observatory, they found evidence that an object similar to a comet was falling onto the star, getting tidally disrupted while doing so.

Patrick Dufour, professor at Université de Montréal, member of the Center for research in astrophysics of Quebec (CRAQ) member of the Institute for research on exoplanets (iREx), used white dwarf models he developed to analyze the observations from both telescopes and assess the composition of the infalling object. “It is the first object found outside our Solar System that is akin to Halley’s Comet in composition.”

In particular, it is the first time that nitrogen was detected in the planetary debris that falls onto a white dwarf. Lead author Siyi Xu of the European Southern Observatory, Germany, explains the importance of the discovery: “Nitrogen is a very important element, the life forms we know build upon that. This particular object is quite rich in nitrogen, more so than in any object observed in our Solar System.”

As many as 25 to 50 percent of white dwarfs are known to be polluted with infalling debris from rocky, asteroid-like objects, but this is the first time a body made of icy, comet-like material has been seen polluting a white dwarf’s atmosphere. These findings are evidence for a belt of comet-like bodies similar to our Solar System’s Kuiper Belt orbiting the white dwarf. These icy bodies apparently survived the star’s evolution from a main sequence star – similar to our Sun – to a bloated red giant and its collapse to a small, dense white dwarf.

The results could suggest the presence of unseen, surviving planets that may have perturbed the belt to draw the icy object into the white dwarf. The white dwarf is part of a wide binary system, with a companion star separated by 2,000 times the distance that the Earth is from the Sun. Another explanation could be that this stellar companion disturbed objects from the belt, causing them to travel toward the burned-out star. A combination of these two scenarios could be in fact responsible for the modification of the original orbit of the comet-like object.

The new findings now provide observational evidence to support the idea that icy bodies are also present in other planetary systems and have survived throughout the history of the star’s evolution.