My Thesis in 400 words: Frédéric Genest 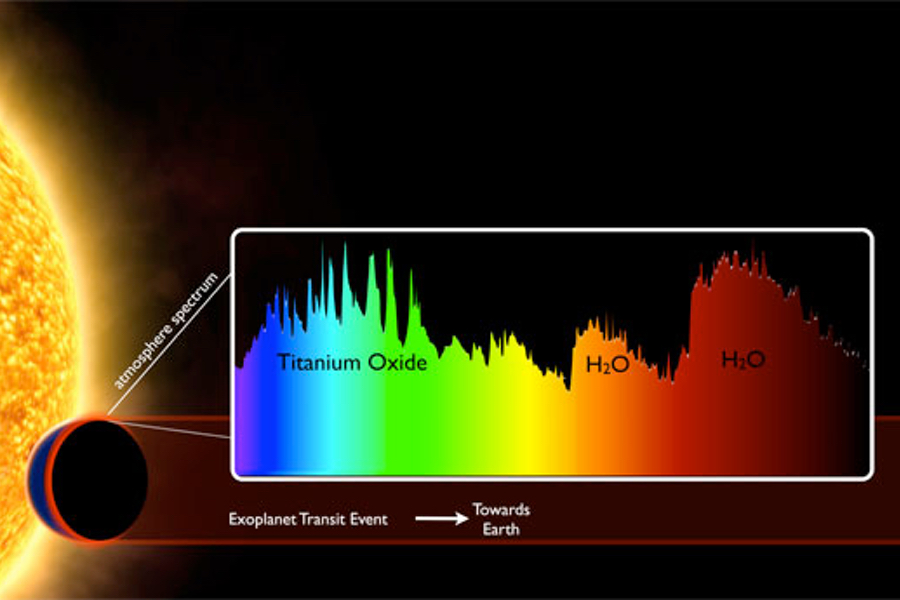 The concept of transit spectroscopy. Some of the star's light passes through the planet's atmosphere, revealing its composition. (Credit: ESA/D. Sing)

There are several methods that allow us to study the few thousand exoplanets known today. The majority of these planets have been detected using the transit method. They thus periodically pass directly between their star and the Earth. This gives us the opportunity to characterize their atmosphere, by studying how this thin layer of gas absorbs the light of their star. Excesses of absorption at different wavelengths can indicate the presence of certain molecules in the atmosphere, such as water, carbon dioxide or methane.

Absorption by the planet’s atmosphere is minuscule compared to stellar radiation: the fractional diminution is of the order of one part per thousand or less. To characterize a planet in transit, we therefore need a good knowledge of the star and its emission in order to isolate the planet’s signal.

Some phenomena can complicate this task considerably. Stellar activity, i.e. the dark and bright spots that dot the surface of a large number of stars, is one such phenomenon. When a planet transits a star with spots, the relative contribution of the spots to the star’s radiation is altered. the planet’s transit indirectly highlights the unocculted spots. These spots being colder or hotter than the rest of the surface, they may have different chemical compositions from the rest of the star’s surface. The final result may be, for example, an apparent water absorption during transit, which we could wrongly attribute to the planet’s atmosphere.

In my thesis, I worked to model this effect as accurately as possible for observations at low spectral resolution and at very high spectral resolution. At low resolution, I was able to conclude that for the coldest stars, stellar activity can quite easily reproduce the signatures of the atmosphere of an Earth-like planet. At high resolution, I demonstrated with my models that it is possible to use the orbital motion of the planet during a transit to distinguish the planet’s spectral lines from the stellar activity’s lines. My results bring a new motivation to obtain high-resolution transit spectra, for example with SPIRou and NIRPS, for planets with sufficient orbital velocity.

Frédéric worked on his master degree at the Université de Montréal between 2018 and 2020, after completing a bachelor’s degree in mathematics and physics at McGill University. His supervisor is David Lafrenière. His thesis will be available soon on Papyrus.