My Thesis in 400 words: Jonathan St-Antoine 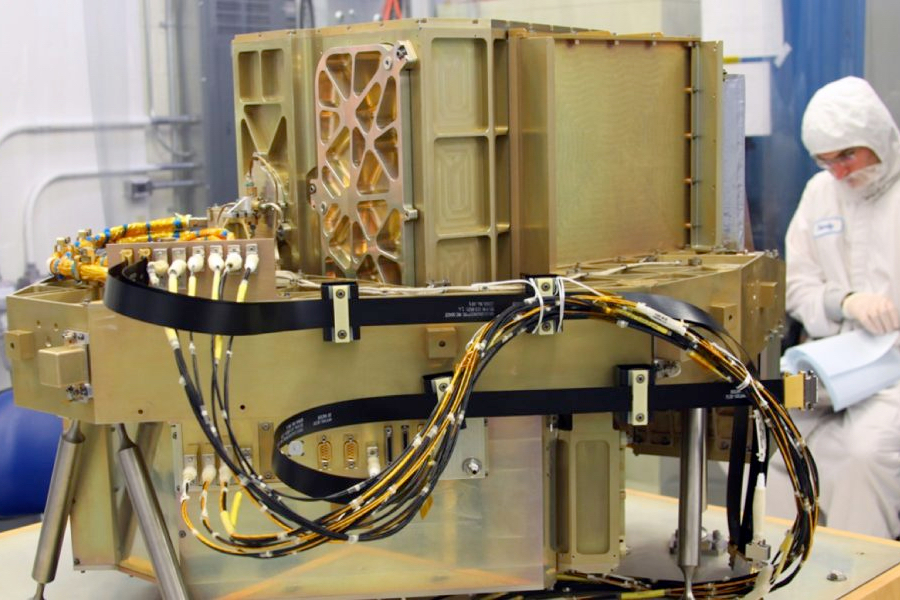 The NIRISS instrument. (Credit: NASA/COMDEV)
Jonathan St-Antoine, an iREx student at Université de Montréal, finished his master degree in 2018. Here, he summarizes the principal research project he carried out  during his studies:

In 2020, the James Webb Space Telescope (JWST) will be launched. It will be the most powerful tool to study the Universe of its generation. NIRISS, one of the four instruments aboard JWST, is an imager and slitless infrared spectrograph developed in Canada by a team led by René Doyon, my thesis advisor. NIRISS stands to be the most promising instrument on JWST for characterizing exoplanet atmospheres.

If the geometry of a planetary system is such that one or more planets transits in front of its host star along our line of sight, the light of the star will dim in regular intervals, each time a planet passes in front of it. Since a very small portion of the starlight is transmitted through the upper layers of the planet’s atmosphere, it is possible to gain a further understanding of these layers using a technique called transit spectroscopy. This is the best method we have to characterize an exoplanet’s atmosphere.

During my master’s studies, I developed the NIRISS Optical Simulator (NOS), a laboratory optical assembly that aims to simulate one of the observing mode of the Canadian instrument. An exoplanet transit is imitated by periodically eclipsing a small fraction (1 % to 10 parts per million – ppm) of the signal emitted by an “artificial star” – a continuous laser source (0.7 μm – 2.9 μm) with a glass cell filled with the organic compound dichloromethane. This compound has many absorption lines in the near-infrared, so the net effect of the cell passing in front of the laser source is analogous to that of a planet transiting in front of a star. The NOS uses an infrared detector and an electronic controller similar to that of NIRISS; this new generation of detectors has never been used before in space. For this reason, NIRISS system needs to be carefully characterized in order to achieve its full potential in space, especially at the very beginning of the telescope’s mission. The results generated by the NOS were used to refine the analysis method, characterize the noise linked to the telescope’s vibrations, determine the performance and limitations of the detector, and also to develop observing strategies accordingly.

Jonathan St-Antoine pursued his master’s thesis at Université de Montréal between 2016 and 2018 after completing undergraduate studies at Bishop’s University. His thesis advisor was René Doyon. Between September 2016 and January 2018, while working on his thesis, Jonathan was one of the telescope operators at Observatoire du Mont-Mégantic. In addition to his work on the NOS, he also contributed to the development of the PESTO camera. As of February 2018, Jonathan has been a research professional, working among other things on the detector of SPIRou.