My Thesis in 400 Words: Louis-Philippe Coulombe 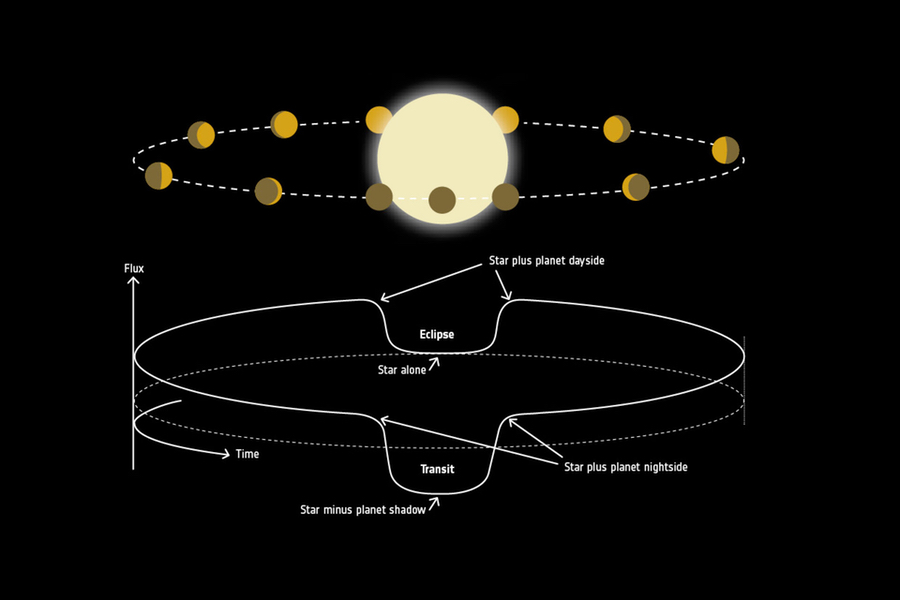 Analysis of an exoplanet along its path around the star. The secondary eclipse corresponds to the moment when the planet passes behind it. (Credit: ESA)

Louis-Philippe Coulombe, an iREx student at Université de Montréal, submitted his master’s thesis in the Spring of 2021. He summarizes here the research projects he conducted as part of his master’s degree.

Research on the atmosphere of exoplanets includes the study of the abundance of certain molecules and elements, the temperature profile as a function of altitude in the atmosphere, as well as different atmospheric processes, for a wide variety of exoplanets. This information allows us to better understand the formation and diversity of planets outside our Solar System.

As exoplanets are located very far from the Earth, it is impossible to see their surface, even with the most powerful telescopes at our disposal. We therefore often treat exoplanets as a point source, neglecting the variation of the atmosphere across longitude and latitude. It is nevertheless possible to treat the atmosphere of an exoplanet as a three-dimensional object by using secondary eclipse mapping. This method is based on observations of secondary eclipses at several wavelengths. The secondary eclipse of an exoplanet corresponds to the moment when, from our point of view, the exoplanet passes behind its star. When this happen, the exoplanet is then occulted in sections, which allows us to isolate the light emitted by a given section of its atmosphere. By measuring the amount of light emitted by each section, it is then possible to make a map of the exoplanet’s atmosphere as a function of longitude and latitude. Since the observations are made simultaneously at several wavelengths, these atmospheric characteristics are obtained in two dimensions. Since we can also determine the temperature in the atmosphere according to the altitude, this effectively corresponds to a three-dimensional map.

Schematic of an exoplanet orbiting its star as it approaches secondary eclipse. (Credit: L.-P. Coulombe)

As part of my master’s degree, my research project focused on the development of a method to simulate observations in several wavelengths of the secondary eclipse signal for a non-uniform atmosphere. I also developed a method to obtain the atmospheric distribution from these observations. In particular, I have simulated the observation of hot and ultra-hot Jupiter with the James Webb Space Telescope (JWST), which will allow exploiting this method at several wavelengths. My work has demonstrated that it is possible to measure the distribution of atmospheric parameters as a function of latitude and longitude from a relatively small number of secondary eclipses observed with JWST.

Louis-Philippe worked on his Master degree at Université de Montréal between 2019 and 2021, under the supervision of Björn Benneke. His thesis will soon be available.