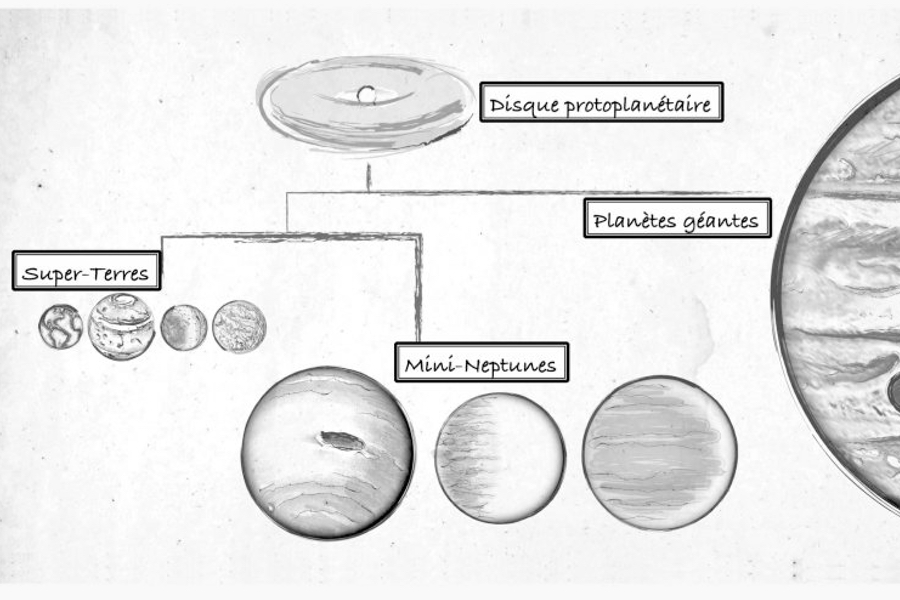 Since the mid-1990s, when the first planet around another sun-like star was discovered, astronomers have been amassing what is now a large collection of exoplanets—nearly 3,500 have been confirmed so far. In a new Caltech-led study, researchers have classified these planets in much the same way that biologists identify new animal species and have learned that the majority of exoplanets found to date fall into two distinct size groups: rocky Earth-like planets and larger mini-Neptunes. The team used data from NASA’s Kepler mission and the W. M. Keck Observatory. 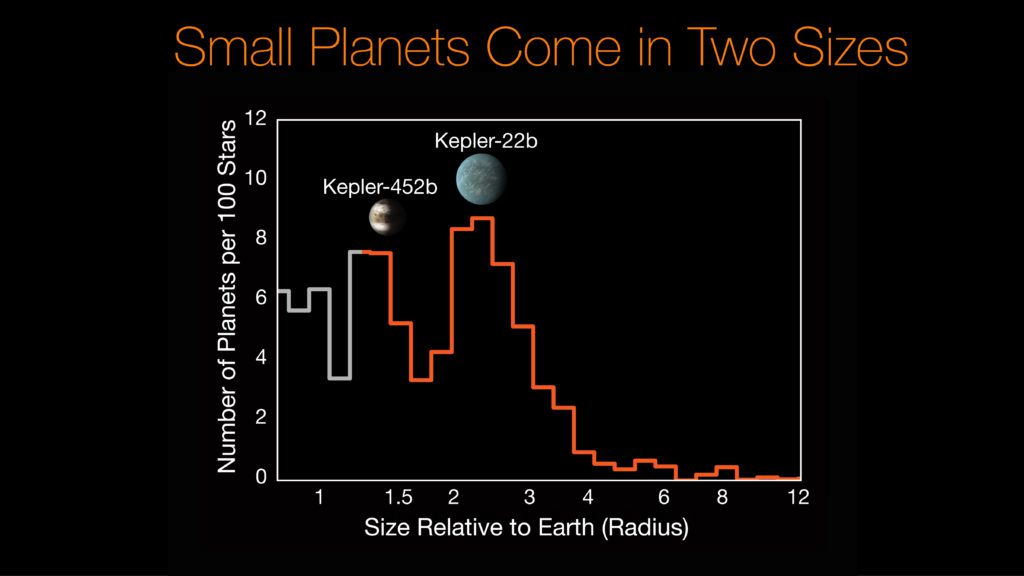 Researchers using data from the W. M. Keck Observatory and NASA’s Kepler mission have discovered a gap in the distribution of planet sizes, indicating that most planets discovered by Kepler so far fall into two distinct size classes: the rocky Earths and super-Earths (similar to Kepler-452b), and the mini-Neptunes (similar to Kepler-22b). This histogram shows the number of planets per 100 stars as a function of planet size relative to Earth. Image credit: NASA/Ames/Caltech/University of Hawaii (B. J. Fulton)

“This is a major new division in the family tree of planets, analogous to discovering that mammals and lizards are distinct branches on the tree of life,” says Andrew Howard, professor of astronomy at Caltech and a principal investigator of the new research. The lead author of the new study, to be published in The Astronomical Journal, is Benjamin J. (B. J.) Fulton, a graduate student in Howard’s group who splits his time between Caltech and the Institute of Astronomy at the University of Hawaii.

“Astronomers like to put things in buckets,” says Fulton. “In this case, we have found two very distinct buckets for the majority of the Kepler planets.” 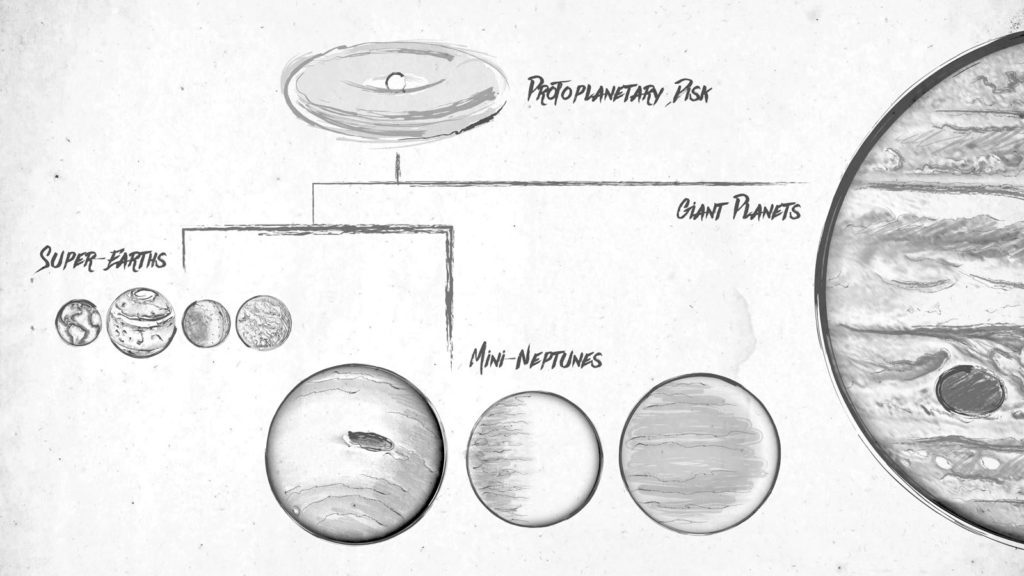 This sketch illustrates a family tree of exoplanets. Planets are born out of swirling disks of gas and dust called protoplanetary disks. The disks give rise to giant planets like Jupiter as well as smaller planets mostly between the size of Earth and Neptune. Researchers using data from the W. M. Keck Observatory and NASA’s Kepler mission discovered that these smaller planets can be cleanly divided into two size groups: the rocky Earth-like planets and super-Earths, and the gaseous mini-Neptunes. Image credit: NASA/Kepler/Caltech (T. Pyle)

Since the Kepler mission launched in 2009, it has identified and confirmed more than 2,300 exoplanets. Kepler specializes in finding planets close to their stars, so the majority of these planets orbit more closely than Mercury, which circles the sun at roughly one-third of the Earth-sun distance. Most of these close-in planets were found to be roughly between the size of Earth and Neptune, which is about 4 times the size of Earth. But, until now, the planets were found to have a variety of sizes spanning this range and were not known to fall into two size groups.

“In the solar system, there are no planets with sizes between Earth and Neptune,” says Erik Petigura, co-author of the study and a Hubble Postdoctoral Fellow at Caltech. “One of the great surprises from Kepler is that nearly every star has at least one planet larger than Earth but smaller than Neptune. We’d really like to know what these mysterious planets are like and why we don’t have them in our own solar system.”

Kepler finds planets by looking for telltale dips in starlight as they pass in front of their stars. The size of the dip is correlated with the size of the planet. But in order to precisely know the planets’ sizes, the sizes of the stars must be measured.

The Caltech team—together with colleagues from several institutions, including UC Berkeley, the University of Hawaii, Harvard University, Princeton University, and the University of Montreal—took a closer look at the Kepler planets’ sizes with the help of the Keck Observatory. They spent years obtaining spectral data on the stars hosting 2,000 Kepler planets. The spectral data allowed them to obtain precise measurements of the sizes of the Kepler stars; these measurements, in turn, allowed the researchers to determine more precise sizes for the planets orbiting those stars.

“Before, sorting the planets by size was like trying to sort grains of sand with your naked eye,” says Fulton. “Getting the spectra from Keck is like going out and grabbing a magnifying glass. We could see details that we couldn’t before.”

With Keck’s new data, the researchers were able to measure the sizes of the 2,000 planets with 4 times more precision than what had been achieved previously. When they examined the distribution of planet sizes, they found a surprise: a striking gap between the groups of rocky Earths and mini-Neptunes. Though a few planets fall into the gap, the majority do not.

The cause of the gap is not clear, but the scientists have come up with two possible explanations. The first is based on the idea that nature likes to make a lot of planets roughly the size of Earth. Some of those planets, for reasons that are not fully understood, end up acquiring enough gas to “jump the gap” and become gaseous mini-Neptunes. 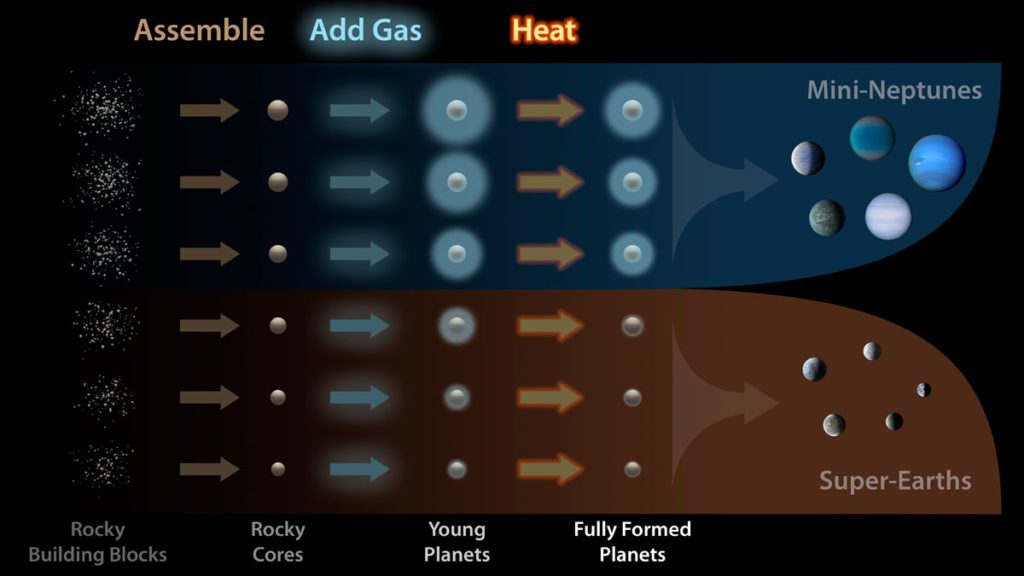 This diagram illustrates how planets are assembled and sorted into two distinct size classes. First, the rocky cores of planets are formed from smaller pieces. Then, the gravity of the planets attracts hydrogen and helium gas. Finally, the planets are “baked” by the starlight and lose some gas. At a certain mass threshold, planets retain the gas and become gaseous mini-Neptunes; below this threshold, the planets lose all their gas, becoming rocky super-Earths. Image credit: NASA/Kepler/Caltech (R. Hurt)

The second possible reason that planets don’t land in the gap has to do with planets losing gas. If a planet does happen to acquire just a little bit of gas—the right amount to place it in the gap—that gas can be burned off when exposed to radiation from the host star.

“A planet would have to get lucky to land in the gap, and then if it did, it probably wouldn’t stay there,” says Howard. “It’s unlikely for a planet to have just the right amount of gas to land in the gap. And those planets that do have enough gas can have their thin atmospheres blown off. Both scenarios likely carve out the gap in planet sizes that we observe.”

In the future, the researchers plan to study the heavy-element content of these planets to learn more about their composition. “We’re living in a golden age of planetary astronomy because we are finding thousands of planets around other stars,” says Petigura. “We are currently working to understand what these mini-Neptunes are made of, which should help explain why these planets form so easily around other stars and why they didn’t form around the sun.”

The W. M. Keck Observatory is a private 501(c)3 nonprofit organization and a scientific partnership of Caltech, the University of California, and NASA.