News from 51 Eridani b 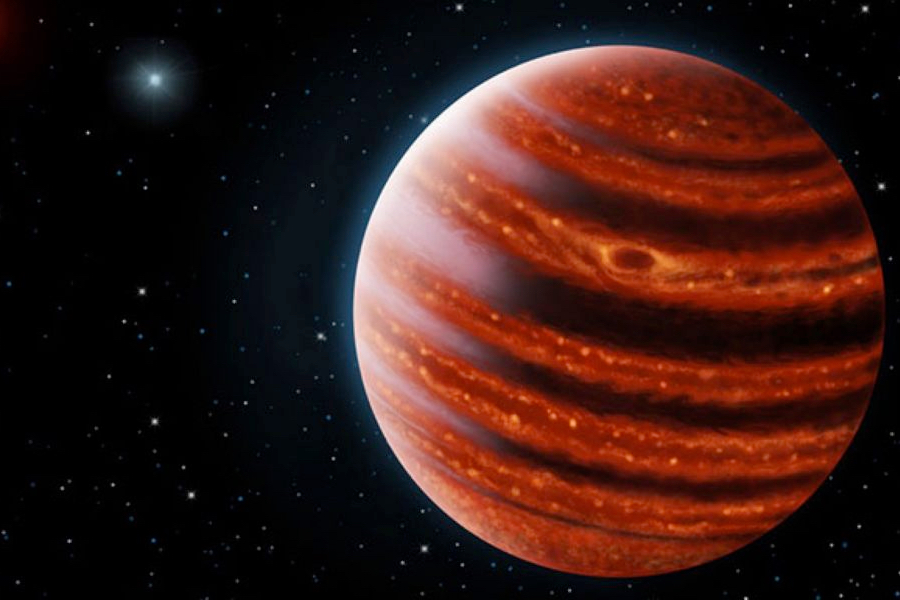 This summer, an international team including several members of iREx has published a new study on the giant exoplanet 51 Eridani b. New observations made at the Gemini South Telescope and Keck Observatory provide a better understanding of the planet’s atmosphere and the way it was formed.

51 Eridani b is the first planet to be detected by the Gemini Planet Imager (GPI), in 2015. This Gemini South Telescope instrument was designed specifically to detect giant planets, similar to those in our Solar System, with the direct imaging method. Gemini uses different strategies to detect directly the light emitted by a planet, which allows the study of its atmosphere, a considerable advantage over indirect detection methods such as radial velocity or the transit method. “We know that 51 Eridani b is a young analog of Jupiter, that is only 20 millions year old and is about 13 astronomical units from its star, a little more than the distance between Saturn and the Sun” explains Julien Rameau, researcher at the Institute for Research on Exoplanet, who is the second author of the scientific article published in The Astronomical Journal.

For this study, researchers obtained new observations of the planet in the infrared: spectra with GPI and photometric data with the NIRC-2 camera at the Keck Observatory. By combining these data with the ones that allowed the detection of the planet, they confirmed that it was particularly “red” (it is brighter at less energetic wavelengths) compared to brown dwarfs and similar-temperature planets that are older. By comparing the observations to theoretical models, the researchers conclude that this distinction could be explained by non-uniform cloud cover on the planet. It could also be related to the fact that the planet is very young. It is believed that as time goes by, giant planets see their cloud cover evolve, moving from relatively uniform coverage to partial coverage, and eventually to no visible clouds at all. 51 Eridani b could possibly be in this transition.

Formation similar to Jupiter and Saturn?

By adjusting theoretical models to their observations, they also manage to estimate the luminosity of the planet. This allows them to conclude that, unlike the other giant planets detected until now by direct imagery, 51 Eridani b could have been formed by “core accretion”. That is the process that, we think, allowed the formation of giant planets in our Solar System. In this formation scenario, a gas planet is first formed by the building of a rocky core, which then traps a lot of gas from its surrounding environment.

A planet that does not show up easily

Since the announcement of its discovery in 2015, 51 Eridani has been the subject of more than half a dozen studies. At about the same time as the study cited here, another one was published, using observations from SPHERE, a high-contrast imager on ESO’s Very Large Telescope. Some of their findings are different from those of the GPI team, for example, they manage to explain their data with uniform cloud cover, without gaps in the cloud cover.

“This shows that this planet, relatively small mass compared to its star and relatively close to it, remains very difficult to observe. The observations made with different instruments are thus marked by a great deal of uncertainty, which affects the results and the conclusions”, explains Mr. Rameau.

This planet has not yet revealed all its secrets. Observations with the future James Webb Space Telescope will certainly help to unravel some of its mysteries.

The article “Characterizing 51 Eri b from 1-5 μm: a partly-cloudy exoplanet” is published in the July 2017 issue of The Astronomical Journal. The team, led by Abhijith Rajan of Arizona State University, includes 61 researchers, including Julien Rameau, René Doyon and David Lafrenière from iREx at the Université de Montréal.