NIRPS gets prepped in Chile 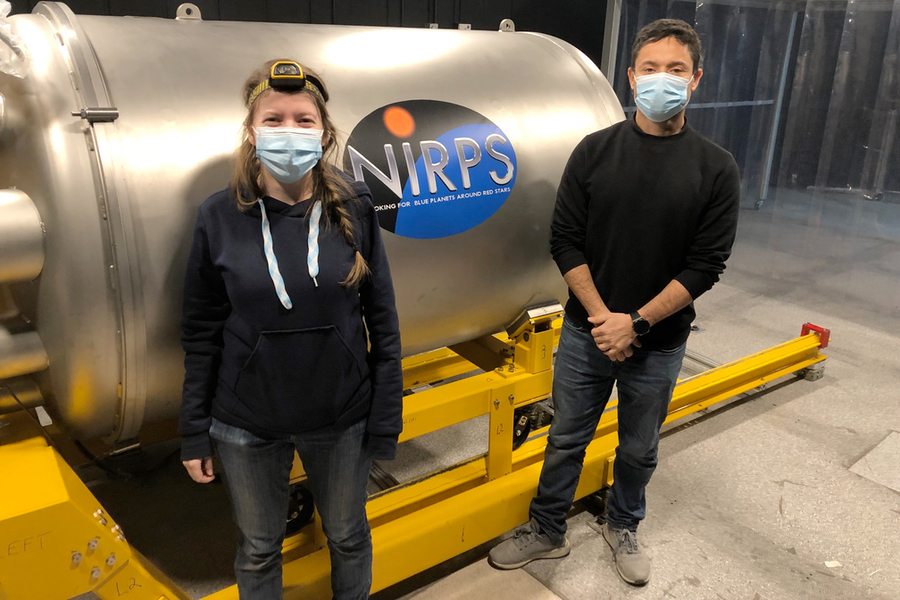 Frédérique Baron (iREx, OMM) and Alex Segovia Milla (Observatoire de Genève), members of the NIRPS team, were on site at La Silla, Chile along with other colleagues in March and April 2022 to install the NIRPS instrument on the telescope. (Credit: G. Lo Curto/ESO)

The NIRPS team has been hard at work for the past few months. This instrument set to detect and study exoplanets using the radial velocity method has finally arrived at its new home, the European Southern Observatory’s 3.6-metre telescope in La Silla, Chile, where it is being installed. 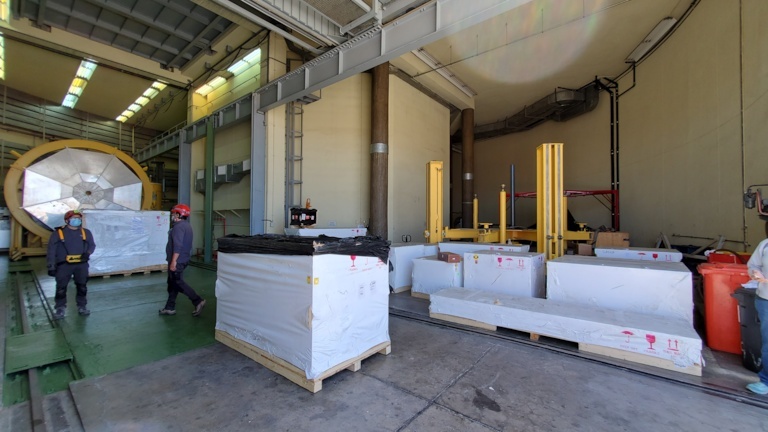 The package containing the NIRPS instrument arrives at La Silla, Chile where it is being installed. (Credit: P. Sinclaire/ESO)

NIRPS (Near InfraRed Planet Searcher) is a spectrograph built by an international collaboration led by our Director René Doyon, also of the Observatoire du Mont-Mégantic, and François Bouchy, from the University of Geneva’s Observatoire astronomique. One of NIRPS’ most important roles will be performing follow-up observations of candidate exoplanets identified by NASA’s TESS (Transiting Exoplanet Survey Satellite) telescope. Along with its sister instrument, SPIRou located in the Northern Hemisphere on the Canada-France-Hawai’i Telescope, NIRPS will be an incredibly powerful infrared instrument to study Earth-sized exoplanets orbiting cooler stars.

Members of the NIRPS team from the Observatoire du Mont-Mégantic, the Université de Montréal and the Université Laval oversaw several of the instrument’s thermal cycles in 2020 and 2021. This consisted of gathering all the optical elements and aligning them with great precision in the cryostat, before cooling everything down to a temperature of about -200°C. During the Fall of 2021, the team then packaged up NIRPS  and prepared it to be shipped off to South America.

NIRPS finally arrived at La Silla in March 2022, followed shortly afterwards by many key members of the NIRPS team. They are working to install the spectrograph in the Coudé room at ESO’s 3.6-metre telescope.

iREx’s very own Frédérique Baron is one of the scientists working on site on the integration of NIRPS. “After four weeks of work, we are happy to see that the installation phase is going well. In addition, the sky in La Silla is beautiful and I’m glad that NIRPS can have such a nice access to the night sky!” says Frédérique, expressing her enthusiasm as the project’s scientific operations approach. Some of the tasks currently being undertaken by Frédérique and her colleagues include installing the cryostat on its rails, testing the electronics that control various systems on the cryostat, and performing metrology of the optics inside the cryostat. We expect to see NIRPS’ first lights on the sky in June 2022.

NIRPS will be able to operate in parallel with the HARPS instrument, which has already been on the 3.6-metre La Silla telescope for nearly 20 years. By extending the capabilities of HARPS to the infrared, NIRPS will give the teams involved in the project unique follow-up capabilities to characterise exoplanets. Recognising the strategic importance of this pairing, ESO has awarded an impressive 740 nights of observing time to the NIRPS team over five years. The entire iREx team is looking forward to hunting for exoplanets thanks to the wealth of high-precision velocimetry data coming soon. Go, NIRPS, go!