New insights into seasons on a planet outside our Solar System 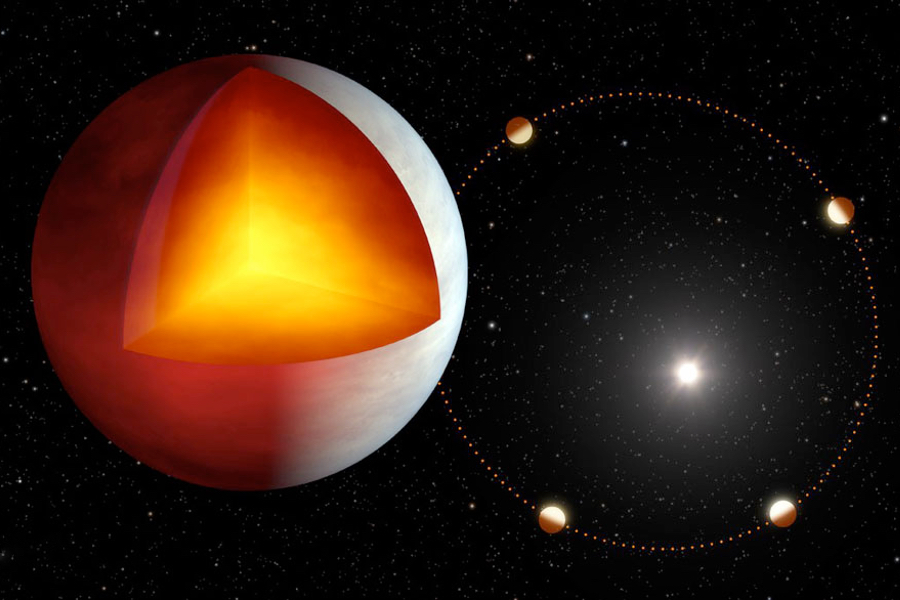 Imagine being in a place where the winds are so strong that they move at the speed of sound. That’s just one aspect of the atmosphere on XO-3b, one of a class of exoplanets (planets outside our solar system), known as hot Jupiters. The eccentric orbit of the planet also leads to seasonal variations hundreds of times stronger than what we experience on Earth.

In a paper published today, a team led by McGill PhD student Lisa Dang, a member of iREx, provides new insight into what seasons looks like on a planet outside our solar system. The researchers also suggest that the oval orbit, extremely high surface temperatures (2,000 degrees C — hot enough to vaporize rock) and “puffiness” of XO-3b reveal traces of the planet’s history. The findings will potentially advance both the scientific understanding of how exoplanets form and evolve and give some context for planets in our own solar system.

Lisa Dang, a PhD student who is a member of iREx, led this research on exoplanet XO-3b. (Credit: Courtesy Image)

Hot Jupiters are massive, gaseous worlds like Jupiter, that orbit closer to their parent stars than Mercury is to the Sun. Though not present in our own solar system, they appear to be common throughout the galaxy. Despite being the most studied type of exoplanet, major questions remain about how they form. Could there be subclasses of hot Jupiters with different formation stories? For example, do these planets take shape far from their parent stars – at a distance where it’s cold enough for molecules such as water to become solid – or closer. The first scenario fits better with theories about how planets in our own solar system are born, but what would drive these types of planets to migrate so close to their parent stars remains unclear.

To test those ideas, the authors of a recent McGill-led study used data from NASA’s retired Spitzer Space Telescope to look at the atmosphere of exoplanet XO-3b. They observed eccentric seasons and measured wind speeds on the planet by obtaining a phase curve of the planet as it completed a full revolution about its host star.

“This planet is an extremely interesting case study for atmospheric dynamics and interior evolution, as it lies in an intermediate regime of planetary mass where processes normally neglected for less massive hot Jupiters may come into play,” says Lisa Dang, the first author of a paper published today in The Astronomical Journal, a PhD student at McGill University’s Department of Physics. “XO-3b has an oval orbit rather than the circular orbit of almost all other known hot Jupiters. This suggests that it recently migrated toward its parent star; if that’s the case, it will eventually settle into a more circular orbit.”

The eccentric orbit of the planet also leads to seasonal variations hundreds of times stronger than what we experience on Earth. Nicolas Cowan, a McGill professor who is a member of iREx explains: “The entire planet receives three times more energy when it is close to its star­­ during a brief sort of summer, than when it is far from the star.”

The researchers also re-estimated the planet’s mass and radius and found that the planet was surprisingly puffier than expected. They suggest and that the possible source of this heating could be due to leftover nuclear fusion.

Excess warmth and puffiness due to tidal heating?

Observations by Gaia, an ESA (European Space Agency) mission, found that the planet is puffier than expected which indicate its interior may be particularly energetic. Spitzer observations also hints that the planet produces much of its own heat as XO-3b’s excess thermal emission isn’t seasonal – it’s observed throughout the year on XO-3b. It’s possible that the excess warmth is coming from the planet’s interior, through a process called tidal heating. The star’s gravitational squeeze on the planet oscillates as the oblong orbit takes the planet farther and then closer to the star. The resulting changes in interior pressure produce heat.

For Dang, this unusual hot Jupiter provides an opportunity to test ideas about which formation processes may producer certain characteristics in these exoplanets. For example, could tidal heating in other hot Jupiters also be a sign of recent migration? XO-3b alone won’t unlock the mystery, but it serves as an important test for emerging ideas about these scorching giants.

“Thermal Phase Curves of XO-3B: An Eccentric Hot Jupiter at the Deuterium Burning Limit” by Lisa Dang et al. was published on January 13th, 2022, in The Astronomical Journal. In addition to Lisa Dang, the team includes Nicolas B. Cowan, Daniel Thorngren from iREx, Taylor J. Bell who is a former PhD student of iREx now at NASA Ames and 14 other co-authors from the United States.