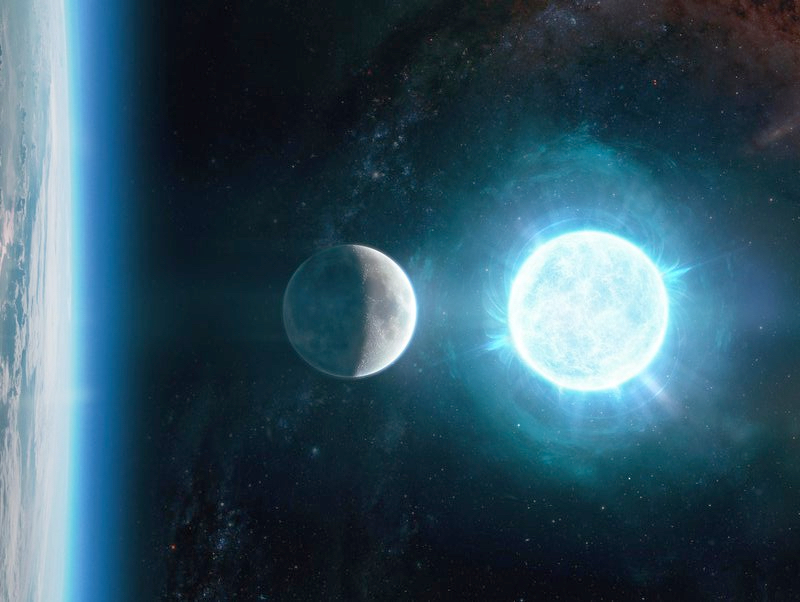 An artistic representation of a white dwarf and our Moon, for scale comparison. (Credit: G. Parisi)

A group of researchers using the W. M. Keck Observatory have discovered a planet-like body that may have been encrusted in limestone and is having its surface layers devoured by its deceased host star. In addition to extending a relatively new method of determining the chemical composition of planets to examine their internal structure, the team found that the rocky material being accreted by the star could be comprised of minerals that are typically associated with marine life processes here on Earth.

The team – comprised of Carl Melis of University of California, San Diego and Patrick Dufour, professor at iREx of the University de Montreal and member of CRAQ – had announced their findings at the 228th meeting of the American Astronomical Society.

Building on past observations of the white dwarf called SDSSJ1043+0855 (the dead core of a star that originally was a few times the mass of the Sun), which has been known to be gobbling up rocky material in its orbit for almost a decade, the team used Keck Observatory’s HIRES instrument fitted to the 10-meter Keck I telescope as well as data from the Hubble Space Telescope to measure and characterize the material being accreted by the star.

What they found is that the white dwarf appears to be accreting the outer-most layers of a differentiated, rocky extrasolar body (i.e., the surface of massive, planet-like object) from its extant planetary system.

“Spectroscopic observations of the white dwarf allowed us to measure the abundances of the rocky material as it is being accreted and filtered through the star’s atmosphere in real time,” Melis said. “We can see the material that used to make up this planet being accreted and replenished on a daily timescale. What we see is what the rock was made of.”

This may be the single best tool astronomers have to determine the chemical composition of planets, according to Luca Rizzi, Support Astronomer at Keck Observatory.

“We’ve known for some time that examining the accreted remains of rocky planets in the atmosphere of their host white dwarf star can give bulk chemical composition information, and now it looks like we can even hone in on specific layers of an accreted body in some fortuitous cases,” Melis said.

Determining the chemical composition or structure of planets outside of the Solar system to date has been elusive at best. “It’s a huge issue in exo-planetology right now,” Melis said. “The major exoplanet identifying methods can’t tell you what a planet is made of or what it’s structure is.”

While the finding will provide a new angle for scientists to study the chemical composition and structure of rocky planets, the possibility that life may have contributed to the inferred mineralogy certainly intrigued the team.

The researchers’ finding shows that SDSSJ1043+0855 is accreting the surface of a body that has large enhancements of carbon. This feature — combined with mild enhancements of calcium and oxygen — points to the possibility of the material coming in the form of calcium-carbonate, a mineral that is often associated with shelled marine organisms here on Earth. Calcium-carbonate is attractive as a mineral constituent of this planet-like body as incorporating and entraining carbon in rocky objects (especially their surfaces) is difficult. The terrestrial planets in our Solar system are said to live in a “carbon desert” since they are so heavily depleted in this element — the planetary surface being accreted by this white dwarf star could have as much as several hundred times more carbon than the surface of the Earth.

“This method allows us to truly get a glimpse of what aliens might be standing on,” Melis said. “In this particular case, the presence of such high levels of carbon is unique and really needs to be explained. Our choice of calcium-carbonate as a potential carrier of the carbon provides a natural way for it to be locked up in the planet and eventually delivered to the white dwarf star, is entirely consistent with the observations in hand, and of course is suggestive. That’s really the hidden subtext. When people think about finding extra-terrestrial life, they think about Hollywood dramatizations. But the first evidence of life outside of our Solar system will probably come in a much subtler form. More likely than not, it’s going to come as a nuanced signature that may not be immediately recognizable.”

Non-biological processes can produce calcium-carbonate too, so its presence isn’t necessarily a smoking gun, even if it is confirmed. “There’s a lot of hoops to jump through before we can settle on the conclusion that life was involved in what we are observing,” Dufour said.

Specifically, the inferred presence of calcium-carbonate came from examining the atomic leftovers of the planet accretion event in the atmosphere of the white dwarf star – after the presumed dust from the planet’s demolished surface was consumed by the white dwarf. The next step will be to look at the dust in a mineral state before it falls into the star, to both confirm its composition and to measure its concentration.

“Future observations with the James Webb Space Telescope can confirm calcium-carbonate if it is present. If we are able to get to that point, then you have to ask: Is there enough there for it to be produced with natural processes?” Melis said.