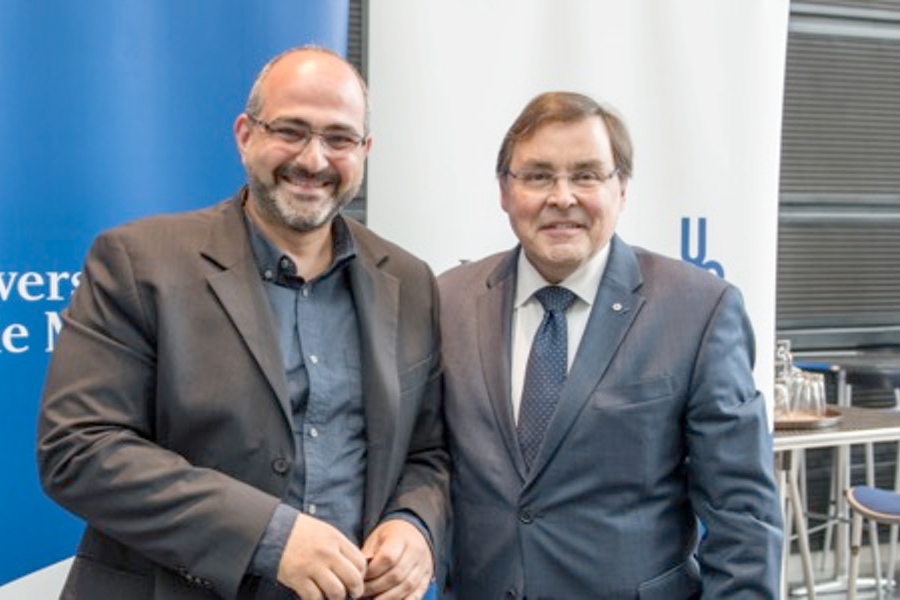 Olivier Hernandez with the Rector of the Université de Montréal, Guy Breton (Credit: A. Philibert/UdeM)

M. Hernandez is now Director of the Rio Tinto Alcan Planetarium since May 2018. He was nominated by René Doyon, professor in the physics department and director of iREx and OMM.

“Olivier Hernandez is one of the key contributor to the success of the OMM and iREx,” enthuses René Doyon. His hard work, his passion and his devotion to promoting astrophysics is a a great inspiration for our community. “

The nominations were evaluated by a committee composed of the Rector of the Université de Montréal, Dr. Guy Breton, the Vice-Rector of Human Resources and Planning, Jean Charest, the Assistant Professor in the Department of Physics and the winner of the 2017 edition Julie Hlavacek-Larrondo, the Honorary Professor in the Department of Physics Yves Lépine, and a retired employee of the university, now President of the AFTER l’UM initiative Sylvia Francis.

Nine other initiatives and employees were honored this year at the ceremony, which was held on May 22, 2018, at the Morris-et-Rosalind-Goodman agora of the Jean-Coutu building.