Probing a new class of exoplanets 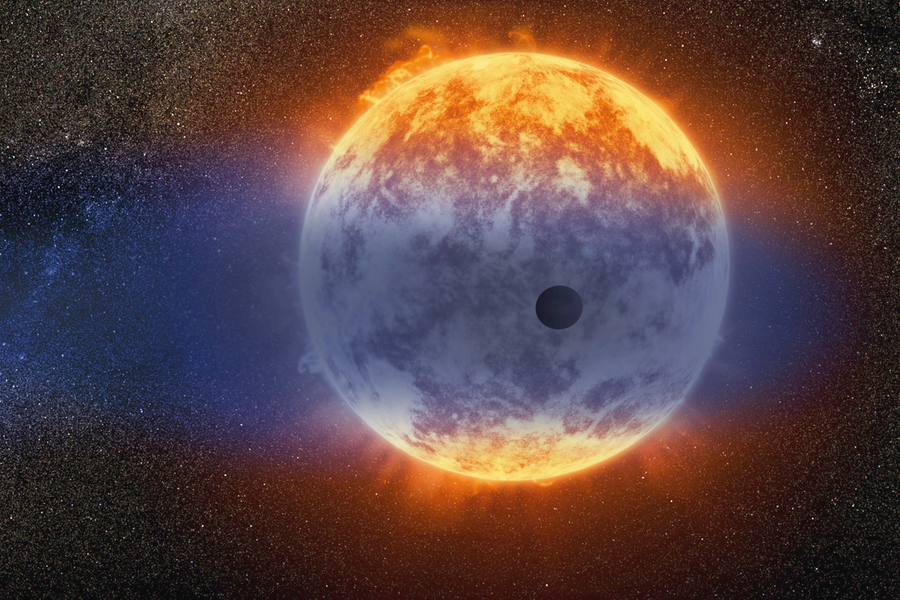 An artist's impression showing a giant hydrogen cloud escaping from the exoplanet GJ3470 b. (Credit: ESA/Hubble)

An international team led by UdeM astronomer gets a clearer picture of what is likely the most abundant type of planet in the Universe.

It was a daunting task that took five years and the accumulation of many data sets from NASA’s powerful Hubble and Spitzer space telescopes. 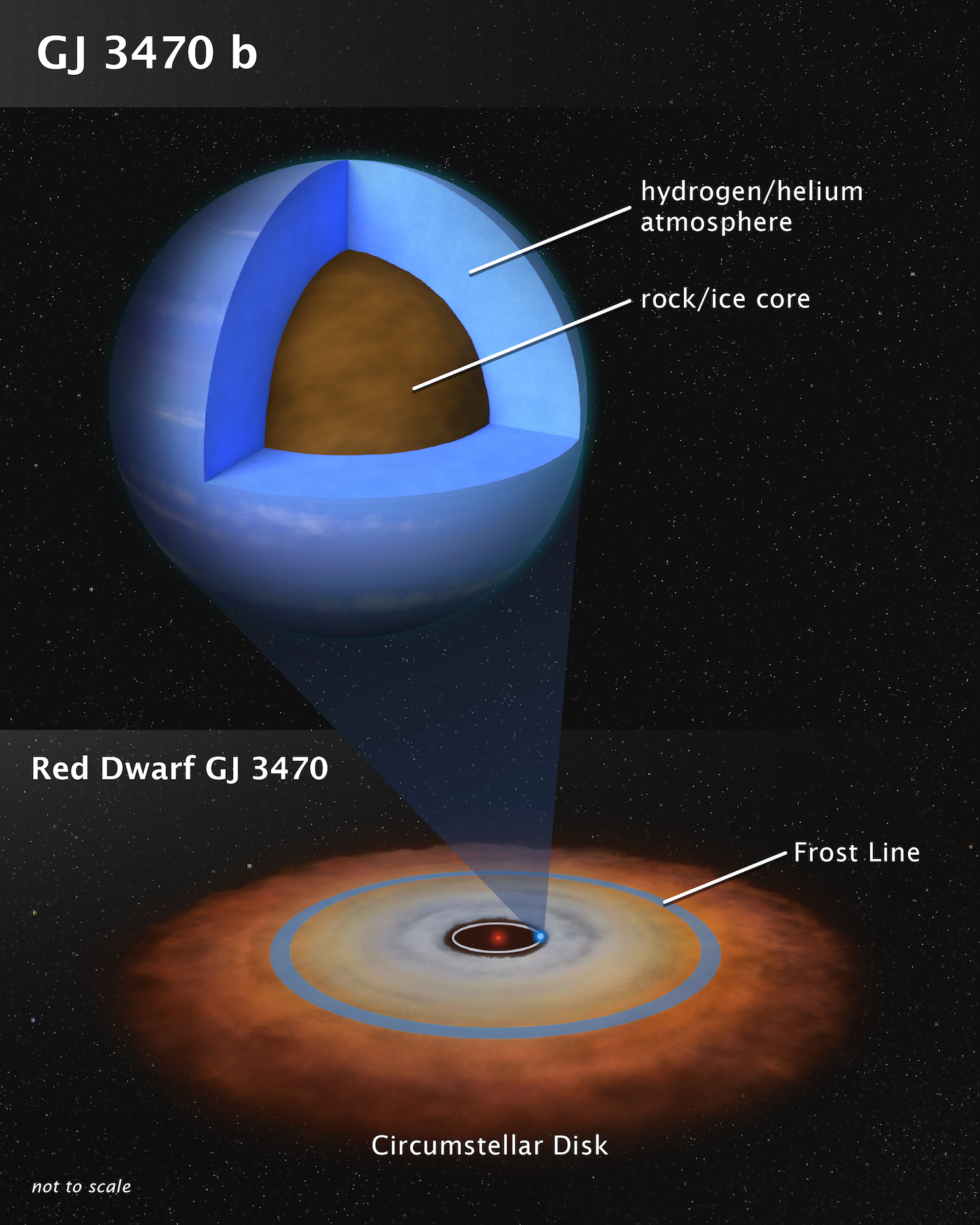 The observed sub-Neptune, GJ 3470 b, orbits a red dwarf star and may have a rock and ice core surrounded by a thick hydrogen and helium atmosphere. (Credit: STScI)

But in the end, a team led by UdeM astronomy professor Björn Benneke has assembled for the first time a “fingerprint” of the chemical composition of a new class of planet unlike anything found in our solar system.

The one that Benneke’s team studied in particular – described in a paper published today in Nature Astronomy – is called GJ 3470 b.

It may be a cross between Earth and Neptune, with a large rocky core buried beneath a deep crushinghydrogen and helium atmosphere. It weighs 12.6 times the mass of Earth, and less than Neptune, which is more than 17 Earth masses.

Many similarly sized worlds have been discovered by NASA’s Kepler space observatory. In fact, 80 per cent of the planets in our galaxy fall into this mass and size range. However, astronomers have never been able to understand the chemical nature of such a planet until now.

Only by making an inventory of the what’s in GJ 3470 b’s atmosphere was the team able to uncover clues to the planet’s nature and origin.

“This is a big discovery in how planets are formed,” said Benneke, whose team included 16  researchers in the U.S. and one in the Netherlands. “GJ 3470 b orbits very close to its star and is 30 times less massive than Jupiter but has managed to accrete the same kind of primordial hydrogen/helium atmosphere, largely unpolluted by heavier elements. We don’t have anything like this in the solar system, and that’s what makes it striking.” 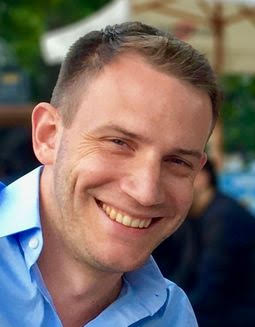 Prof. Björn Benneke from UdeM lead the team that made this impressive discovery.

Key to studying the atmosphere of a world like GJ 3470 b are spectroscopic observations. To probe the planet, the astronomers enlisted the combined multi-wavelength capabilities of the Hubble and Spitzer telescopes. They measured changes in starlight as the planet passed in front of its star (transit) and passed behind it (eclipse).  In total, the two space telescopes observed 12 transits and 20 eclipses.

“For the first time we have a spectroscopic signature of such a world,” said Benneke, the study’s lead author, adding that so far his team has been unable to come up with a name to classify the type of planet GJ 3470 b is: “super-Earth,” “sub-Neptune” or something else.

One thing they can accurately describe is GJ 3470b’s atmosphere: it’s mostly clear, covered only in thin hazes that are transparent under infrared light, so the scientists were able probe deep into it.

“We expected to find an atmosphere strongly enriched in heavier elements like oxygen and carbon that create abundant water vapor and methane gas,” said Benneke. “Instead, we found an atmosphere that is so poor in heavy elements that its composition resembles the hydrogen/helium rich composition of the sun.”

A planet formed near its star

The new evidence suggests that, unlike other exoplanets that are thought to have migrated toward their star from a distance much farther out in the galaxy, GJ 3470 b formed just where it is today, Benneke believes.

Why? Probably because the planet was born precariously close to its red dwarf star. Benneke  hypothesizes that it essentially started out as a dry rock 1.5 to two times the diameter of Earth; it then rapidly accreted hydrogen from a primordial disk of gas around its star.

“If the planet had formed further from the star, where water and other astronomical ices can condense, we would have expected to see more water and methane in the atmosphere,” the scientist explained.

“We’re seeing an object that was able to accrete hydrogen from the protoplanetary disk, but didn’t run away to become what we call a ‘hot Jupiter’ – this is intriguing. One explanation is that the circumstellar disk dissipated before the planet could bulk up further. So it got stuck being a sub-Neptune.” 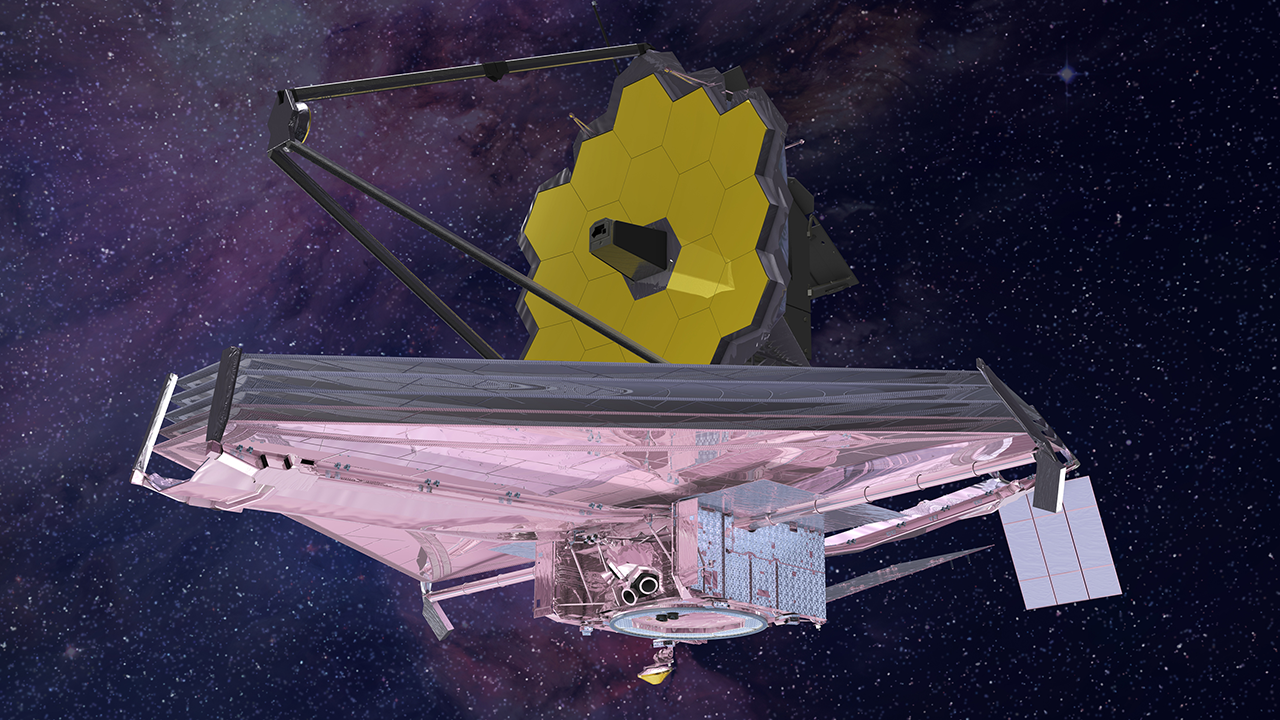 The James Webb Space Telescope (JWST) will be crucial to study and characterise the atmospheres of exoplanets like GJ 3470 b. (Credit: Northrop Grumman)

Soon, thanks to its unprecedented sensitivity in the infrared spectrum, NASA’s James Webb Space Telescope will be able to probe even deeper into GJ 3470 b’s atmosphere. That will allow closer observation of the transits and eclipses of GJ3470b to a precision of between 3 and 5 micrometres, where atmospheric hazes become increasingly transparent.

It was mainly funded by NASA and is based in part on observations made with the Spitzer Space Telescope, operated by the Jet Propulsion Laboratory of the California Institute of Technology under a contract with NASA. Further funding came from Canada’s Natural Sciences and Engineering Research Council (NSERC), the Fond de Recherche Québécois – Nature et Technologie (FRQNT; Québec), and others.