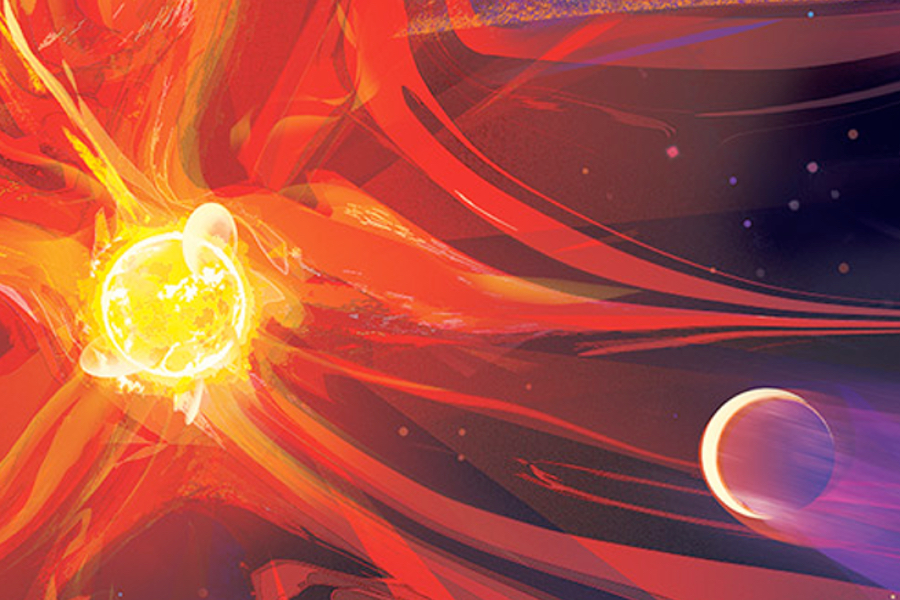 Artist's view of the very young eruptive red dwarf AU Mic and its newly discovered planet, with the debris disk that gave rise to the planet in the distance. (Credit: NASA/JPL-Caltech)

SPIRou, the new high-precision infrared spectropolarimeter recently installed at the Canada-France-Hawaii Telescope, has measured for the first time the mass and density of a Neptune-like planet in close orbit around a very young and extremely active star. These results are part of an international study of the properties of this recently discovered very young planetary system, involving the France-Hawaii Telescope and researchers from the Institute for Research on Exoplanets.

AU Microscopii (AU Mic) is a young star located only 32 light-years from Earth, in the constellation of the Microscope. With a mass of half of that of the Sun and a temperature of barely 3500°C (against 5500°C for the Sun), it is what is called a red dwarf. AU Mic and its planet AU MIC b, recently discovered, are 22 million years old, or only a few months if we compare the life span of a star to that of a human being.

Finding exoplanets with SPIRou at the Canada-France-Hawaii Telescope

SPIRou is the new high-precision infrared spectropolarimeter installed since 2018 on the 3.6 m Canada-France-Hawaii Telescope (CFHT) located at the top of Maunakea on the Big Island of Hawaii. This instrument is the result of an international collaboration led by Jean-François Donati (University of Toulouse, IRAP), principal investigator of the project, and René Doyon, co-principal investigator, and director of the Institute for Research on Exoplanets and the Mont-Mégantic Observatory. Operating in the infrared, SPIRou has been optimized for the detection of exoplanets and the mapping of the magnetic fields of red dwarfs and young stars, bright in this wavelength range.

To find exoplanets, SPIRou uses the radial velocity method, which consists in measuring the movement of a star due to the gravitational attraction of all its planets. The amplitude of this motion gives us information about the mass of the planet, the respective distance of the two bodies and the inclination and shape of the planet’s orbit. SPIRou is also able to perform at the same time a polarimetric analysis of the stellar light, allowing us to detect the magnetic field of stars, and thus to characterize the activity that pollutes the radial velocity data. Indeed, if AU Mic b modulates the radial velocity of its star by 8.5 m/s, the magnetic activity on the surface of AU Mic induces apparent radial velocity variations that can reach 80 m/s and that can drown the signal caused by the planet. 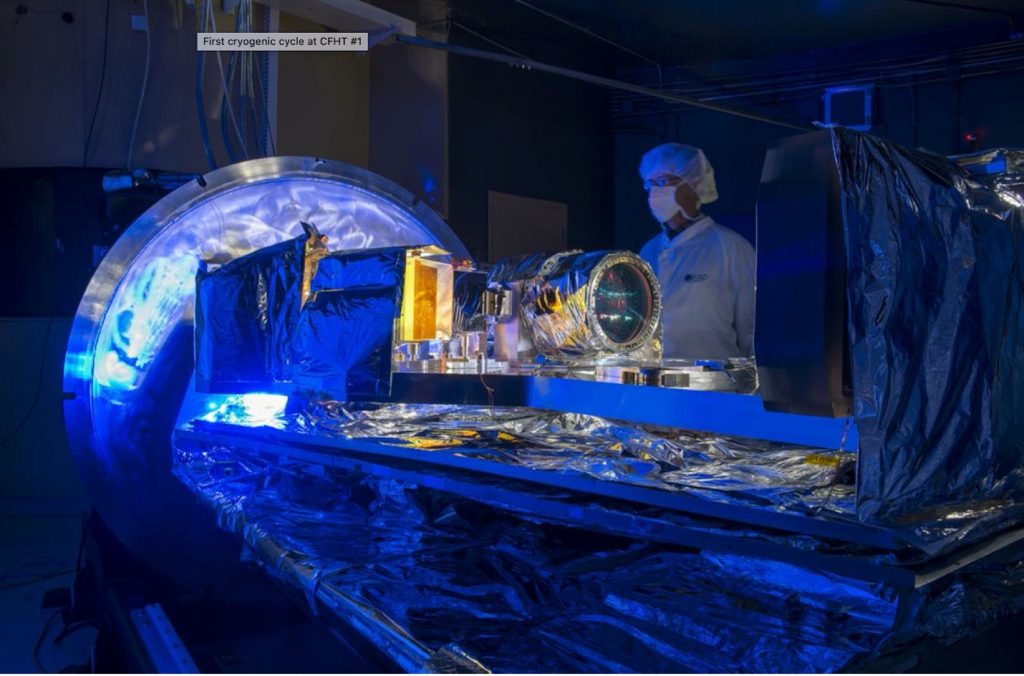 The new SPIRou spectropolarimeter was installed at the Canada-France-Hawaii Telescope in 2018. SPIRou is a cryogenic instrument cooled down at -200°C that needs to be thermally regulated at the extreme stability level of 0.001°C to be able to detect planets like that of AU Mic. (Credit: SPIRou team/S. Chastanet/CNRS/OMP)

The strong magnetic activity of AU Mic is due to its very young age. There are giant spots on the surface of the star that harbour intense magnetic fields. In such a context, detecting the small signal of the planet in the huge noise generated by the stellar activity is an instrumental and observational challenge that SPIRou was able to meet brilliantly thanks to its unique velocimetric and polarimetric capabilities. This feat required a detailed analysis of SPIRou data using sophisticated numerical techniques, which revealed the planetary signal by accurately modeling the magnetic phenomena occuring on the surface of the young star.

SPIRou was able to measure for the first time the mass of AU Mic b and, combined with the radius measurement obtained by TESS, the team was able to obtain the first estimate of the density of the planet. AU Mic b turns out to be barely denser than water, about 4 times less dense than Earth, and its density is surprisingly similar to that of Neptune. AU Mic b orbits however 450 times closer to its star than Neptune does around the Sun. Its atmosphere reaches 300°C and it thus belongs to the family of warm Neptune type planet. AU Mic b therefore becomes the first planet whose mass and average density are reliably measured with SPIRou, and the first young planet for which these quantities are known.

Four articles were written to better understand the AU Mic system. The article Investigating the young AU Mic system with SPIRou: large-scale stellar magnetic field and close-in planet mass will be published in MNRAS soon. The article Spin-orbit alignment and magnetic activity in the young planetary system AU Mic, was published in Astronomy & Astrophysics. The article SPIRou: NIR velocimetry and spectropolarimetry at the CFHT” was published in MNRAS and the article Early science with SPIRou: near-infrared radial velocity and spectropolarimetry of the planet-hosting star HD 189733  was published in Astronomy & Astrophysics. The discovery team includes scientists from IRAP/CNRS (B Klein, JF Donati, C Moutou), most of whom also handled the construction, validation and commissioning of SPIRou at IRAP and CFHT, from IAP/CNRS (E Martioli, G Hébrard, S Dalal), from IPAG/CNRS (X Delfosse, X Bonfils), the Institute for Research on exoplanets (É. Artigau, R. Doyon, L. Malo, O. Hernandez, P. Vallée, N. Cook et S. Thibault), and several other countries and  partners involved in the SPIRou project.  These studies benefited from additional funding from the ERC (European Research Council, grant #740651 NewWorlds) and the ANR (Agence Nationale de la Recherche, grant ANR- 18-CE31-0019 SPlaSH).  SPIRou was funded by a worldwide consortium of partners from France, Canada, CFHT, Switzerland, Brazil, Taiwan, and Portugal.