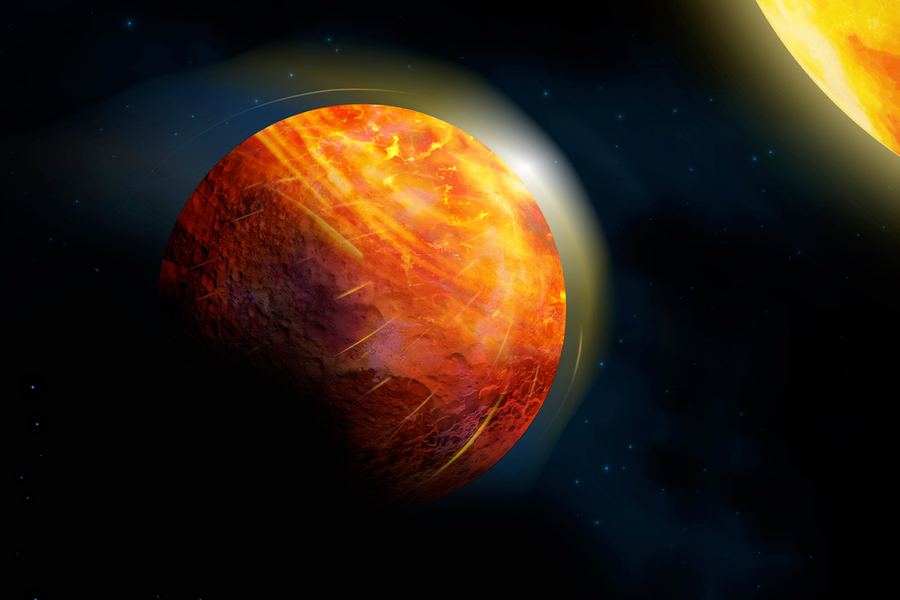 “Rocky” weather could change the surface and atmosphere over time on exoplanet K2-141b.

Among the most extreme planets discovered beyond the edges of our solar system are lava planets: fiery hot worlds that circle so close to their host star that some regions are likely oceans of molten lava. According to scientists from McGill University, the Institute for research on exoplanets (iREx), York University, and the Indian Institute of Science Education, the atmosphere and weather cycle of at least one such exoplanet is even stranger, featuring the evaporation and precipitation of rocks, supersonic winds that rage over 5000 km/hr, and a magma ocean 100 km deep.

In a study published in Monthly Notices of the Royal Astronomical Society, the scientists use computer simulations to predict the conditions on K2-141b, an Earth-size exoplanet with a surface, ocean, and atmosphere all made up of the same ingredients: rocks. The extreme weather forecasted by their analysis could permanently change the surface and atmosphere of K2-141b over time.

“The study is the first to make predictions about weather conditions on K2-141b that can be detected from hundreds of light years away with next-generation telescopes such as the James Webb Space Telescope,” says lead author Giang Nguyen, a PhD student at York University who worked under the supervision of McGill University Professor and iREx member Nicolas Cowan on the study.

In analyzing the illumination pattern of the exoplanet, the team discovered that about two-thirds of K2-141b faces perpetual daylight – rather than the illuminated hemisphere we are used to on Earth. K2-141b belongs to a subset of rocky planets that orbit very close to their star. This proximity keeps the exoplanet gravitationally locked in place, meaning the same side always faces the star.

The night side experiences frigid temperatures of below -200 C. The day side of the exoplanet, at an estimated 3000 C, is hot enough to not only melt rocks but vaporize them as well, ultimately creating a thin atmosphere in some areas. “Our finding likely means that the atmosphere extends a little beyond the shore of the magma ocean, making it easier to spot with space telescopes,” says Nicolas Cowan.

Remarkably, the rock vapour atmosphere created by the extreme heat undergoes precipitation. Just like the water cycle on Earth, where water evaporates, rises into the atmosphere, condenses, and falls back as rain, so too does the sodium, silicon monoxide, and silicon dioxide on K2-141b. On Earth, rain flows back into the oceans, where it will once more evaporate and the water cycle is repeated. On K2-141b, the mineral vapour formed by evaporated rock is swept to the frigid night side by supersonic winds and rocks “rain” back down into a magma ocean. The resulting currents flow back to the hot day side of the exoplanet, where rock evaporates once more.

Still, the cycle on K2-141b is not as stable as the one on Earth, say the scientists. The return flow of the magma ocean to the day side is slow, and as a result they predict that the mineral composition will change over time – eventually changing the very surface and atmosphere of K2-141b.

“All rocky planets­, including Earth, started off as molten worlds but then rapidly cooled and solidified. Lava planets give us a rare glimpse at this stage of planetary evolution,” says Professor Cowan.

The next step will be to test if these predictions are correct, say the scientists. The team now has data from the Spitzer Space Telescope that should give them a first glimpse at the day-side and night-side temperatures of the exoplanet. With the James Webb Space Telescope launching in 2021, they will also be able to verify whether the atmosphere behaves as predicted.

Founded in Montreal, Quebec, in 1821, McGill University is Canada’s top ranked medical doctoral university. McGill is consistently ranked as one of the top universities, both nationally and internationally. It is a world-renowned institution of higher learning with research activities spanning two campuses, 11 faculties, 13 professional schools, 300 programs of study and over 40,000 students, including more than 10,200 graduate students. McGill attracts students from over 150 countries around the world, its 12,800 international students making up 31% of the student body. Over half of McGill students claim a first language other than English, including approximately 19% of our students who say French is their mother tongue.