The end of an era… and the beginning of another 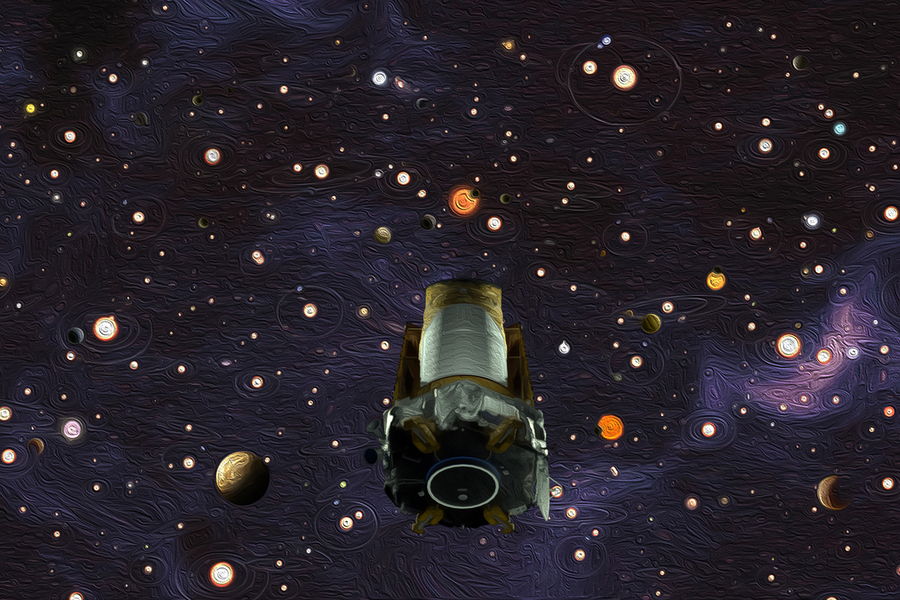 Artistic rendition of the Kepler Space Telescope with a slew of exoplanets that made it famous. (Credit: NASA/W. Stenzel/D. Rutter)

Launched in 2009, the Kepler Space Telescope revolutionised our view of exoplanets. Out of fuel, it was retired by NASA in late October 2018.

In 1992, a team lead by William Borucki submitted a proposal to NASA for a space telescope whose mission was detecting exoplanets using the transit method. This is and indirect method by which an exoplanet is detected by through tiny brightness variations in a star that happen when a planet transits in front of it. Astronomers detected the first exoplanet via transit method in 1999: HD209458, a hot Jupiter that was previously discovered using the radial velocity method. After a feasibility study confirmed that the project proposed by Borucki was sound, NASA moved forward with the project and launched the Kepler Space Telescope in March 2009.

Kepler has only one scientific instrument: a state-of-the-art photometer capable of measuring brightness variations of stars to a very high degree of precision. Using the largest digital camera capable of functioning in space, it stares continuously at a patch of sky in the Cygnus constellation containing 150,000 stars. Four years after the start of the mission, and once the principal science goal had been achieved, Kepler lost two reactions wheels, leading to a change in Kepler’s scientific mission. As the telescope could no longer stare continuously at the same patch of sky, the K2 mission was born. Using two out of its four reaction wheels, Kepler can still point to a given direction for about 80 days, which permits the discovery of small planets in the habitable zone of small stars. This observing mode allowed Kepler to observed 380,000 additional stars. After nine years of observations, the telescope has run out of fuel, making scientific observations no longer possible. Kepler will be retiring in its actual orbit.

Kepler leaves behind a very rich legacy. Having observed over 530,000 stars, it has confirmed 2662 exoplanet candidates, or about two-thirds of all exoplanets known to date. This bounty of planets has shown that the diversity of these worlds is much greater that in our own Solar System. For example, discoveries from Kepler have shown that the most common  types of planets are Super-Earths, worlds that have sizes between that of Earth and Neptune that have not yet been found in the Solar System. Kepler’s data have also demonstrated that planetary systems are often very condensed, namely that several planets orbit very close to their stars and that the distance between the orbits of sibling planets is much smaller than in our Solar System. All together, results from Kepler have shown that the Solar System does not appear to be a typical planetary system.

The end of Kepler does not mean the end of discovery of exoplanets using the transit method. Indeed, Kepler’s successor is already online. Transiting Exoplanet Survey Satellite (TESS) was launched in April 2018 aboard one of Space X’s Falcon 9 rockets. Scientific observations began on July 27th 2018. To this day, TESS data has already been able to confirme 70 new exoplanet candidates, proving that Kepler’s torch has already been passed on to this next mission.