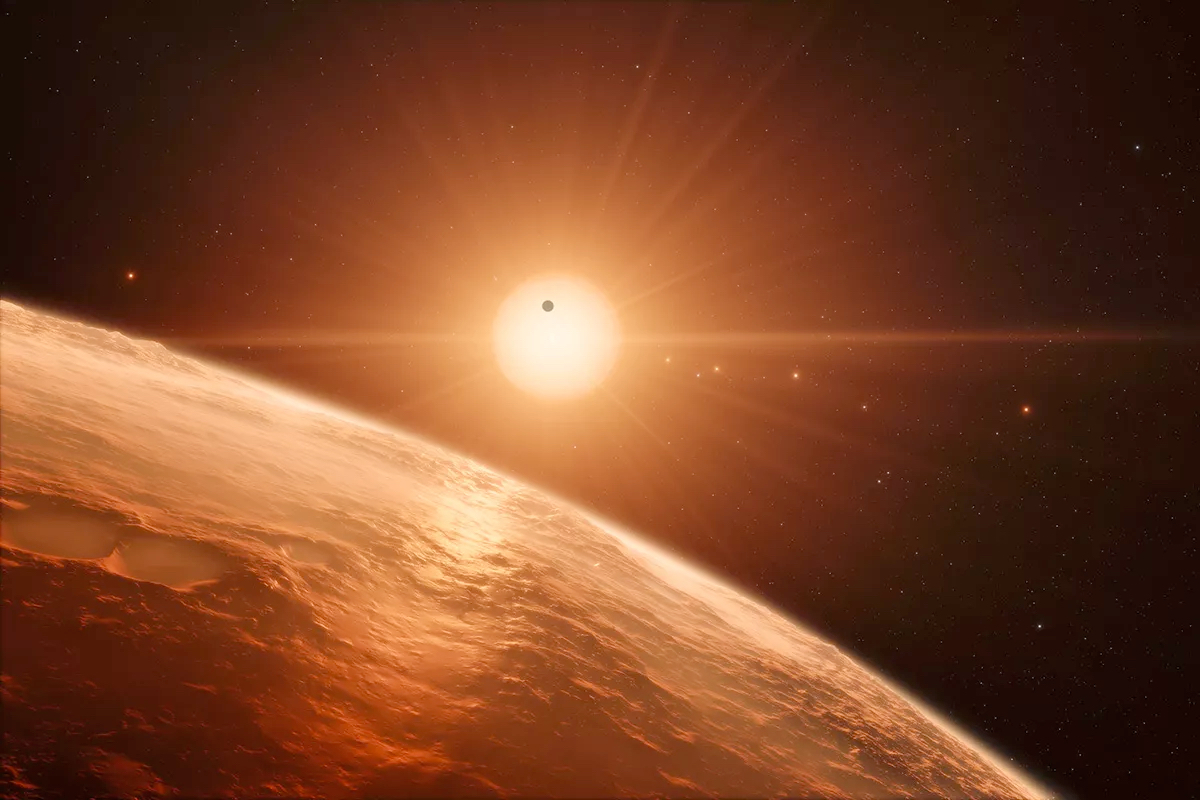 An artistic representation of a view of the surface of one of the exoplanets in the TRAPPIST-1 system. (Credit: N. Bartmann/ESO)

What do exoplanets and beer have in common? TRAPPIST. TRAPPIST is the name of an exoplanet survey that just announced the discovery of a stellar system containing three planets, each the size of the Earth.

Beside their cool names, TRAPPIST-1b, 1c and 1d, these are of interest because they orbit in the so-called habitable zone: an imaginary belt around their star where the temperature is just right to allow for the existence of liquid water on the surface of these planets.

Critics may oppose: have we not heard already the announcements of Earh 2.0 discoveries? True, the last decade has seen the discovery of a dozen or so Earth-sized exoplanets orbiting in the habitable zone. Then why get excited with TRAPPIST-1b/c/d? It is because this exo solar system is built around a very special star: a red dwarf whose diameter is only a tenth that of our Sun. 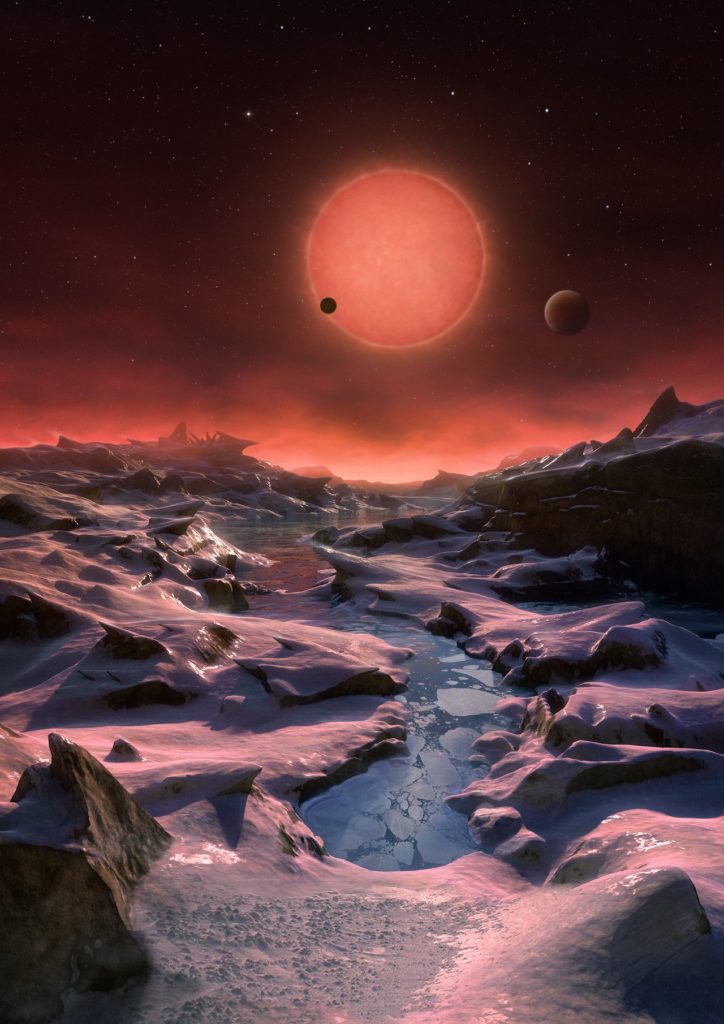 Artist’s view of the ultra cool dwarf star TRAPPIST-1 from the surface of one of its planets. (Credit: ESO)

To understand the importance of that last detail in the short-term search for extra-terrestrial life, one must first explain how the TRAPPIST planets were detected. TRAPPIST is a Belgium-led project (hence the beer-inspired name) that operates a small telescope located in the chilean Andes, where almost all nights are clear. During the fall of 2015, that telescope continuously measured (each minute for a total of 245 hours over 62 nights) the brightness of that star in search of periodic dips, a telltale signature of a planet crossing in front and masking some light of its star. What the team leader, Michaël Gillion, reported is 11 such events, each lasting about an hour with an amplitude of 1% (the apparent brightness decreased by 1%). The luminosity dip is simply caused by the dark disk of the planet occulting a fraction of the surface area of its star. Two scenarios can produce a strong dip: 1) either the transiting planet is large, 2) either the star being eclipsed is small. In the case of TRAPPIST, the later is true as we know that thestar diameter is only 12% that of the Sun. For comparison, were it possible to observe the transit of our own Earth across the Sun, the event would cause a brightness dip of only 0.01% (100 times less than TRAPPIST-1), which is beyond the detection capability of current telescopes. And the search for extra-terrestrial life is all about detection capabilities.

Enters the next space telescope, James Webb, which will be launched from French Guyana in 2018. A measurement within reach of that Hubble Space Telescope “successor” is the detection of atmospheres around terrestrial planets through the “transit spectroscopy” technique. Similarly to the belgium team, the James Webb telescope will measure stellar brightness dips, except this time details across the whole stellar spectrum will be measured, rather than only the total brightness. This way, an water-vapor rich exoplanet like the Earth would leave an inprint at the wavelengths where water vapor is opaque. At those wavelengths, the planet atmosphere litterally appears thicker than at wavelengths where the atmosphere is transparent. In other words, we seek at measuring the apparent size of an exoplanet at each wavelength of light in order to measure the opacity (hence the composition) of its putative atmosphere. Needless to say, these spectral variations are very subtle in the case of the atmospheres of small planets. For example, in the hypothetical case of the Earth transiting in front of the Sun, the water vapor inprint represents a variation of 1 part per million (1 ppm, 0.0001%). But in the case of TRAPPIST-1d (the most promissing), thanks to the small size of its star, we speak rather of a much bigger 20 ppm inprint. This is coincidentally very close the expected sensitivity of the James Webb telescope, at 5 to 20 ppm. TRAPPIST-1d is therefore the first Earth-sized planet orbiting within the habitable zone around its star whose water vapor can leave a strong enough signal to be observed with the James Webb Space Telescope.

TRAPPIST-1 is not the end of the story. Another NASA mission, the TESS space telescope, will hunt for exoplanets as soon as 2017, across the whole sky. With luck, TESS could discover a stellar system similar to TRAPPIST (small terrestrial planet and small star) but even closer to us, hence around a star that appears brighter in the sky which would boost the sensitivity of the James Webb telescope. In such an event, we can not exclude even detecting molecules such as oxygen in an exoplanet atmosphere. Considering that oxygen is a molecular gas that can not exist at chemical equilibrium in large concentration, its mere presence is a tantalizing sign for life. We are getting ever closer to knowing if extraterrestrial life exists.