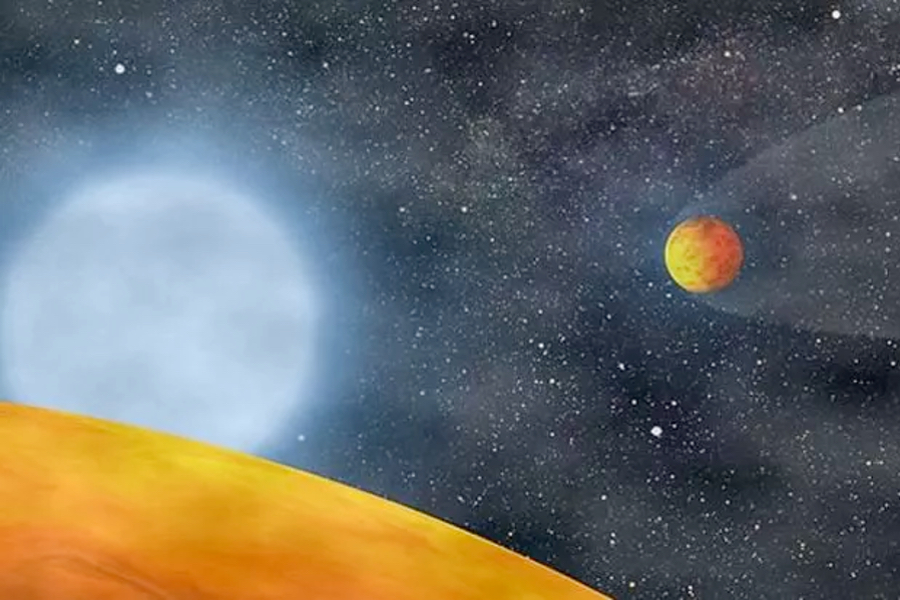 An artistic representation of two Earth-sized planets orbiting a star at the end of its life. (Credit: S. Charpinet)

Two planets lighter than the Earth!

Gilles Fontaine, a professor at the University of Montreal, describes two planets discovered in the course of his research. These two planets, comparable in size to the Earth, are orbiting around an old star that went through the red giant stage. This planetary system is located in the vicinity of the constellations of Cygnus and Lyra, at about 3900 light-years from our planet.

“The two planets, named KOI 55.01 and KOI 55.02, orbit very close to their host star explains Professor Fontaine from the Département de physique at the Université de Montréal and a member of the Centre for Research in Astrophysics of Quebec (CRAQ). To be at such small distances from their giant star, these planets probably plunged deep into its gaseous envelope, and despite the extreme temperature, still survived. “Their host star, KIC 05807616, is the residue from the core of a red giant star exposed after the almost total expulsion of its gaseous envelope.

Dipping in their host star, the two planets must have contributed to the mass-loss and its transformation into a red giant. It suggests that planetary systems may therefore influence the evolution of their host stars. KIC 05807616, which probably resembled our Sun billions of years ago, is now only a shadow of itself: a star with a helium fusion core topped with a thin layer of hydrogen.

The two planets are probably the remains of Jupiter-like gas giant planets, orbiting close to their star when it was still burning hydrogen in its core. They are now chthonic planets, that is to say, they have become rocky or metallic cores whose gaseous envelope  have evaporated during the immersion phase in their star.

From stars to planets

Professor Fontaine specializes in the study of stars and planets. Nevertheless, his analysis of the pulsations of a star revealed the presence of 2 unidentified bodies around that star. “All stars vibrate, they emit pulses that tell us about their composition and structure. It is through the study of these pulsations that we can identify the presence of one or more planets around a star“, he explains. Analysis of the data of the star KIC 05807616, provided by the US satellite Kepler (NASA), led his team – including astrophysicists from eight different countries – to notice the intriguing presence of two tiny periodic modulations. These modulations could not be attributed to the oscillations of the star or to any other stellar causes, leaving the presence of two bodies orbiting around KIC05807616 as the only plausible explanation.

The two planets are extremely close to the surface of their very hot star (27 000 ° C at the surface) and subjected to intense radiation. There certainly reign appalling conditions, particularly in the hemisphere facing the star where temperatures can reach 8000-9000 ° C. Such conditions, the most extreme ever encountered to date among extrasolar planets, lead to many questions about the nature of bodies likely to survive such a hell.

“This is an environment where astronomers did not expect to find the presence of planets, says Professor Fontaine. Our discovery broke several “records”: these planets are the smallest, hottest, closest to their star and the fastest that have been observed until now. But the most interesting fact about our finding is that it shows, for the first time, that planets can affect the evolution of their star.”

A Compact System of Small Planets Around Evolved year Post Red Giant Star was published in the December 22, 2011 edition of the  journal Nature. The research team was led by Stephane Charpinet (Université de Toulouse), in collaboration with his former supervisors from the Département de physique at Université de Montréal, Gilles Fontaine and Pierre Brassard. Two other former doctoral students in the group of pr Fontaine in Montreal, Suzanna Randall (European Southern Observatory) and Valerie Van Grootel (Université de Liège) also participated in the work. Gilles Fontaine holds the Canada Research Chair in stellar astrophysics. This study was made possible thanks to funding from the Fond de recherche du Québec – Nature et Technologie, and the Natural Sciences and Engineering Research Council of Canada.