A planet in the habitable zone of our nearest neighbor 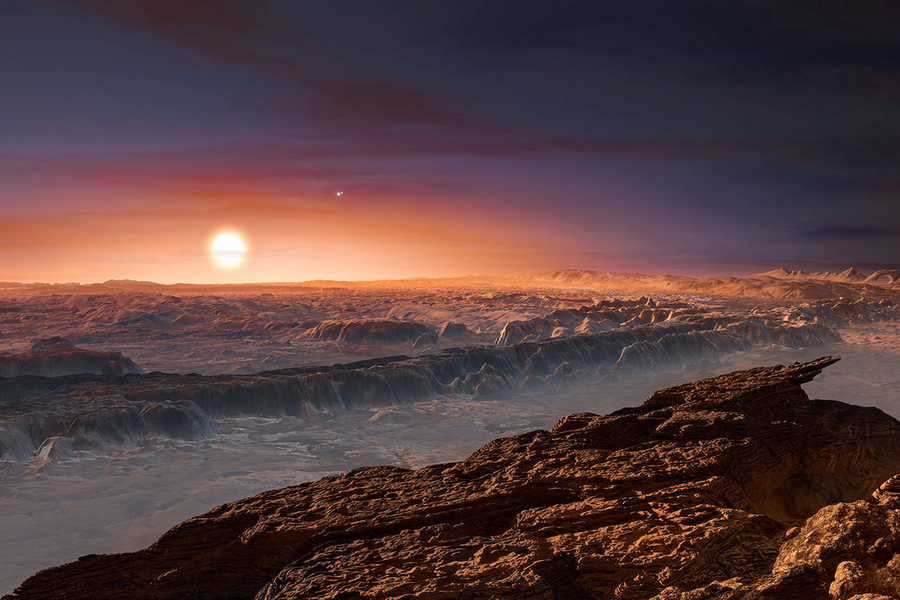 This artist's impression shows a view of the surface of the planet Proxima b orbiting the red dwarf star Proxima Centauri (Credit: ESO/M. Kornmesser)

Our story begins 101 years ago with the publication of a short paper entitled “a faint star of large proper motion” by the astronomer Robert Innes, then based in Johannesburg, South Africa.

At the time, Innes was comparing photographic plates in search of stars moving rapidly across the sky, a sign of their proximity to the Sun. In addition to noting the apparent motion of this star, he noticed that it shared the proper motion of α (alpha) Centauri, one of the brightest double stars in the sky. It was already known at the time that α Centauri was the closest star system to the Sun; by combining the very low apparent luminosity with its proximity, astronomers were able to quickly deduce that this star was inherently very dim. We now know that it is a triple system.

As our closest galactic neighbors, the α Centauri system, its two “suns” (α Centauri A and α Centauri B), and its red dwarf (Proxima) hold a special place in the imagination of astronomers and the general public. They are found in many science fiction books, such as Avatar or Lost in Space. 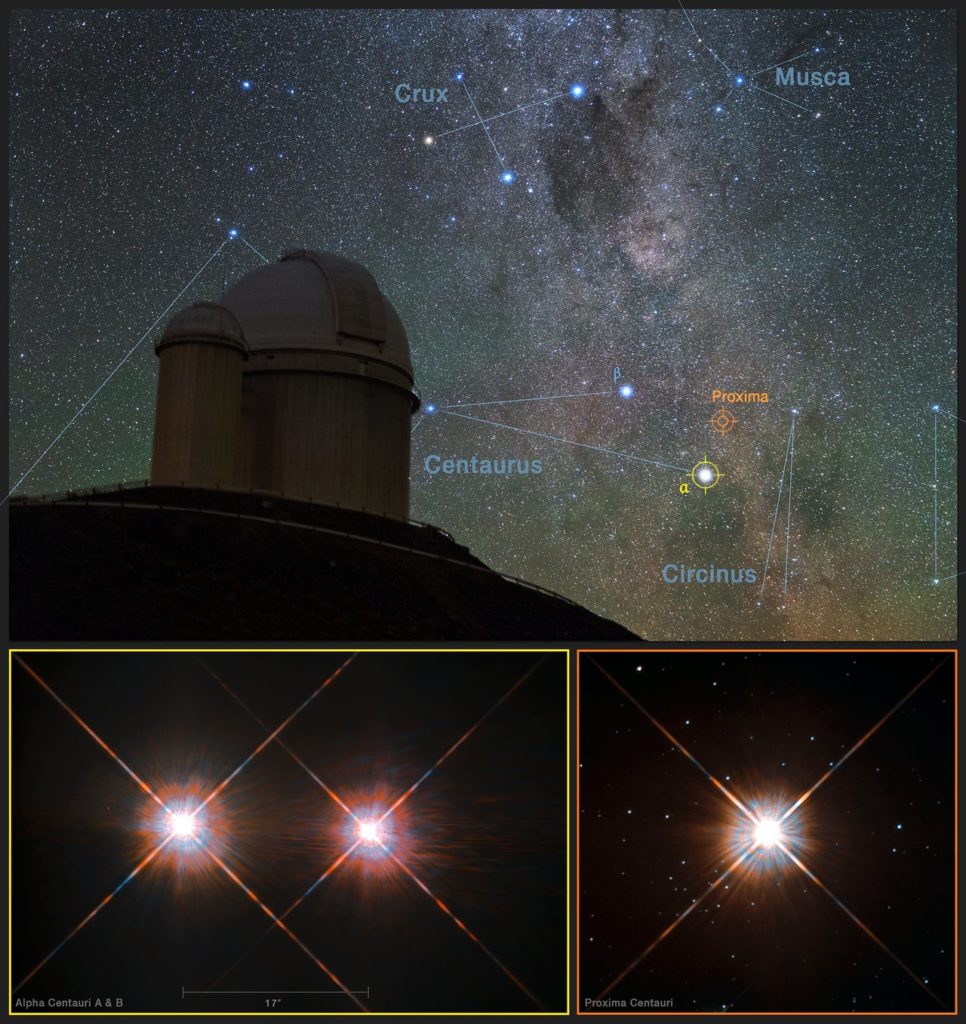 Of course, astronomers have been looking to identify possible planets around the stars of the α Centauri system. Despite its proximity, current technology does not yet allow direct imaging of planets. Astronomers can only detect them indirectly. The preferred method is to regularly measure the speed of a star to detect the dynamic effect of possible planets in orbit around it. The search for exoplanets around α Centauri stars seemed to bear fruit in 2012 when a team led by researchers at the Geneva Observatory announced the discovery of an Earth-like planet around α Centauri B. This exoplanet, whose orbit is extremely close to its star, would have made it a lava-covered world with a surface temperature of about 1200°C. This work was quickly challenged by other teams, and a detailed analysis of the measurements showed that the activity of the star – its spots and flares – was the cause of the observed velocity variations and not a possible planet.

This is obviously more than enough to discourage planet hunters! Proxima has of course been studied extensively for planets, and as the data accumulated, the characteristic signal of a planet began to appear. As the radial velocity technique requires a very large number of measurements, it is quite normal to see at first a marginal detection of a planet which will be confirmed, or not, by obtaining a large number of additional measurements. The team conducting the work on Proxima, well aware of the existence of the refuted planet around α Centauri B, therefore decided to conduct a campaign of observations to establish, beyond any reasonable doubt, the presence of a planet around Proxima. This campaign conducted in early 2016 tracked Proxima’s velocity almost every day for nearly 3 months and at the same time took a large number of measurements with small telescopes aimed at detecting spots or flares that could have distorted the data. The analysis of this campaign has finally left no room for doubt: the planet around Proxima is real! The discovery was announced in the prestigious journal Nature last August by Guillem Anglada-Escudé and a large team of collaborators based mainly in England and Europe.

This new planet, for the moment named Proxima b, is a little more massive than the Earth and is orbiting Proxima with a revolution period of 11 days. The distance between Proxima b and its star Proxima is 20 times smaller than the Earth-Sun distance. Proxima being much less luminous than our Sun, the small distance between Proxima b and its star allows it to have a temperature comparable to that of the Earth and to develop, perhaps, conditions favorable to life. Of course, we are still far from detecting life on Proxima b, but this has not prevented several teams from publishing models on the climate that this planet could have.

The fact that Proxima is our closest neighbor will greatly facilitate the study of its intriguing planet. Already, some believe that the future giant telescopes to be built in Chile in the 2020s will be able to take images of Proxima b. Others, much more ambitious, are already talking about the possibility of sending the first interstellar probes there!

The discovery of Proxima b was made with the HARPS instrument installed on ESO’s 3.6 m telescope in La Silla, Chile. HARPS uses light from the visible spectrum to measure the speed of stars and infer the presence of planets. Stars like the Sun emit most of their flux in visible light, and HARPS is the ideal tool for studying them. On the other hand, red dwarfs like Proxima emit most of their flux in the infrared, and their study is difficult with instruments like HARPS that can only observe a small fraction of their light. In collaboration with the Geneva Observatory, iREx will build a new instrument, NIRPS, which will be used simultaneously with HARPS and will be able to measure the radial velocity of stars from their infrared spectrum. The first observations with HARPS and NIRPS should take place in 2019 and should make it possible to discover many planets similar to Proxima b around the red dwarfs of the solar neighborhood.

To read the press release in French on the ESO discovery, follow this link.

Etienne Artigau, the author of this article is a researcher at iREx. To know more about him, please visit his profile here.