An extrasolar world covered in water? 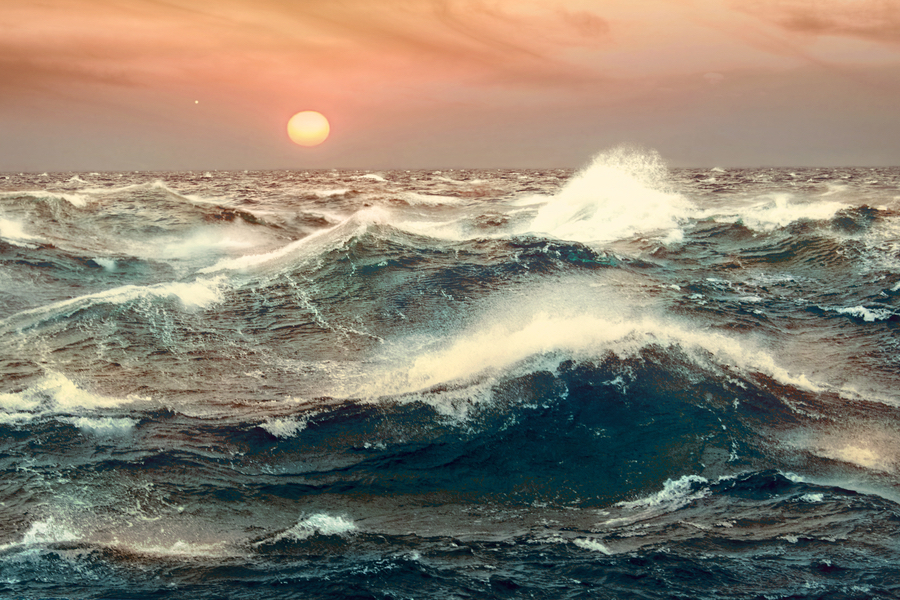 Artistic representation of the surface of TOI-1452 b, which could be an "ocean planet", i.e. a planet entirely covered by a thick layer of liquid water. (Credit: B. Gougeon/UdeM)

With the help of instruments designed partly in Canada, a team of Université de Montréal astronomers have discovered an exoplanet that could be completely covered in water, a target they hope to observe with the Webb telescope soon. 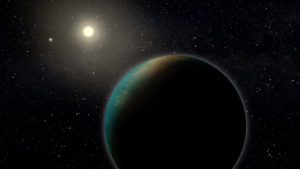 Artistic rendition of the exoplanet TOI-1452 b, a small planet that may be entirely covered in a deep ocean. (Credit: B. Gougeon/Université de Montréal)

An international team of researchers led by Charles Cadieux, a Ph.D. student at the Université de Montréal and member of the Institute for Research on Exoplanets (iREx), has announced the discovery of an exoplanet orbiting TOI-1452, one of two small stars in a binary system located in the Draco constellation about 100 light-years from Earth.

The exoplanet, known as TOI-1452 b, is slightly greater in size and mass than Earth and is located at distance from its star where its temperature would be neither too hot nor too cold for liquid water to exist on its surface. The astronomers believe it could be an “ocean planet,” a planet completely covered by a thick layer of water, similar to some of Jupiter’s and Saturn’s moons.

In an article published on August 12th in The Astronomical Journal, Cadieux and his team describe the observations that elucidated the nature and characteristics of this unique exoplanet.

“I’m extremely proud of this discovery because it shows the high calibre of our researchers and instrumentation,” said René Doyon, Université de Montréal Professor and Director of iREx and of the Observatoire du Mont-Mégantic (OMM). “It is thanks to the OMM, a special instrument designed in our labs called SPIRou and an innovative analytic method developed by our research team that we were able to detect this one-of-a-kind exoplanet.” 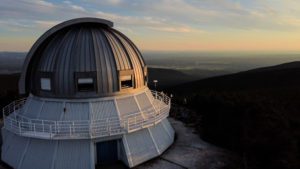 The Observatoire du Mont-Mégantic located in the Eastern Townships in Quebec hosts a 1,6m telescope that was instrumental in confirming this discovery. (Credit: E. Chouchane/Université de Montréal)

It was NASA’s space telescope TESS, which surveys the entire sky in search of planetary systems similar to our own, that put the researchers on the trail of TOI-1452 b. Based on the TESS signal, which showed a slight decrease in brightness every 11 days, astronomers predicted a planet that has a diameter about 70% larger than that of Earth.

Charles Cadieux belongs to a group of astronomers that does ground follow-up observations of candidates identified by TESS in order to confirm their planet type and characteristics. He uses PESTO, a camera installed on the OMM’s telescope that was developed by Université de Montréal Professor David Lafrenière and his Ph.D. student François-René Lachapelle.

“The OMM played a crucial role in confirming the nature of this signal and estimating the planet’s radius,” explained Cadieux. “This was no routine check. We had to make sure the signal detected by TESS was really caused by an exoplanet circling TOI-1452, the largest of the two stars in that binary system.”

The host star TOI-1452 is much smaller than our Sun and is one of two of similar size stars in a binary system. The two stars orbit each other and are separated by such a small distance — 97 astronomical units, or about two and a half times the distance between the Sun and Pluto — that the TESS telescope sees them as a single point of light. But PESTO’s resolution is high enough to distinguish the two objects, and the images showed that the exoplanet does orbit TOI-1452, which was confirmed through  subsequent observations by a Japanese team.

To determine the planet’s mass, the researchers then observed the system with SPIRou, an instrument installed on the Canada-France-Hawaii Telescope in Hawai’i. Designed in large part in Canada, SPIRou is ideal for studying low-mass stars such as TOI-1452 because it operates in the infrared spectrum, where these stars are brightest. Even then, it took more than 50 hours of observation to estimate the planet’s mass, which is believed to be nearly five times that of Earth. 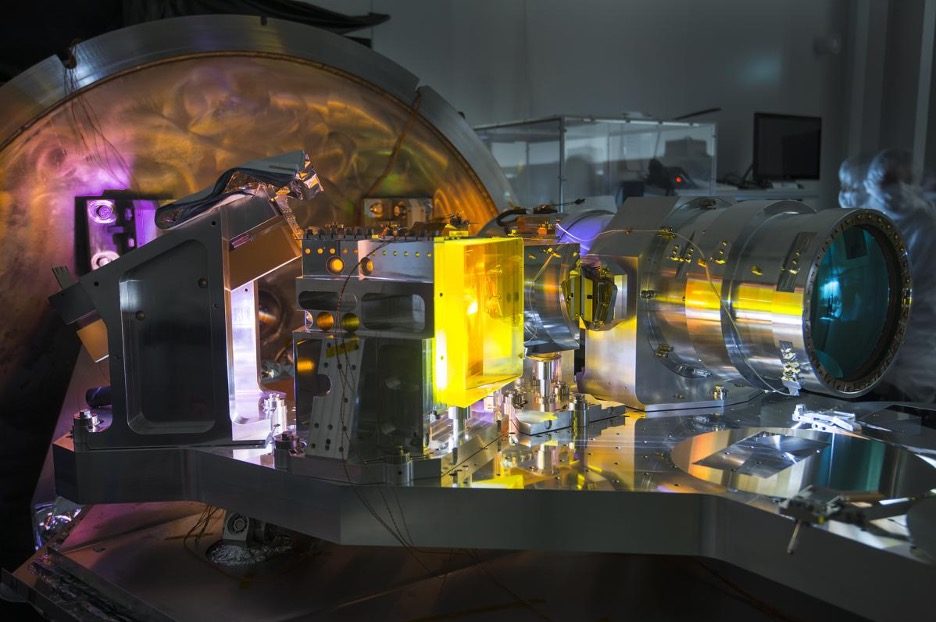 The optical system of the SPIRou spectrograph on the cryogenic bench in the IRAP/OMP clean room. (Credit: S. Chastanet/CNRS/UPS/OMP)

Researchers Étienne Artigau and Neil Cook, also with iREx at the Université de Montréal, played a key role in analysing the data. They developed a powerful analytic method capable of detecting the planet in the data collected with SPIRou. “The LBL method [for line-by-line] ] allows us to clean the data obtained with SPIRou of many parasite signals and to reveal the weak signature of planets such as the one discovered by our team,” explained Artigau.

The team also includes Quebec researchers Farbod Jahandar and Thomas Vandal, two Ph.D. students at the Université de Montréal. Jahandar analysed the host star’s composition, which is useful for constraining the planet’s internal structure, while Vandal was involved in analysing the data collected with SPIRou.

TOI-1452 b is probably rocky like Earth, but its radius, mass, and density suggest a world very different from our own. Earth is essentially a very dry planet; even though we sometimes call it the Blue Planet because about 70% of its surface is covered by ocean, water actually only makes up only a negligible fraction of its mass — less than 1%.

Water may be much more abundant on some exoplanets. In recent years, astronomers have identified and determined the radius and mass of many exoplanets with a size between that of Earth and Neptune (about 3.8 times larger than Earth). Some of these planets have a density that can only be explained if a large fraction of their mass is made up of volatiles such as water. These hypothetical worlds have been dubbed “ocean planets.”

“TOI-1452 b is one of the best candidates for an ocean planet that we have found to date,” said Cadieux. “Its radius and mass suggest a much lower density than what one would expect for a planet that is basically made up of metal and rock, like Earth.”

The University of Toronto’s Mykhaylo Plotnykov and Diana Valencia are specialists in exoplanet interior modeling. Their analysis of TOI-1452 b shows that water may make up as much as 30% of its mass, a proportion similar to that of some natural satellites in our Solar System, such as Jupiter’s moons Ganymede and Callisto, and Saturn’s moons Titan and Enceladus.

An exoplanet such as TOI-1452 b is a perfect candidate for further observation with the James Webb Space Telescope, or Webb for short. It is one of the few known temperate planets that exhibit characteristics consistent with an ocean planet. It is close enough to Earth that researchers can hope to study its atmosphere and test this hypothesis. And, in a stroke of good fortune, it is located in a region of the sky that the telescope can observe year round.

“Our observations with the Webb Telescope will be essential to better understanding TOI-1452 b,” said Doyon, who is also the ​​Principal Investigator of NIRISS, one of the four science instruments of the James Webb Space Telescope. “As soon as we can, we will book time on the Webb to observe this strange and wonderful world.”