When do aging brown dwarfs sweep the clouds away? 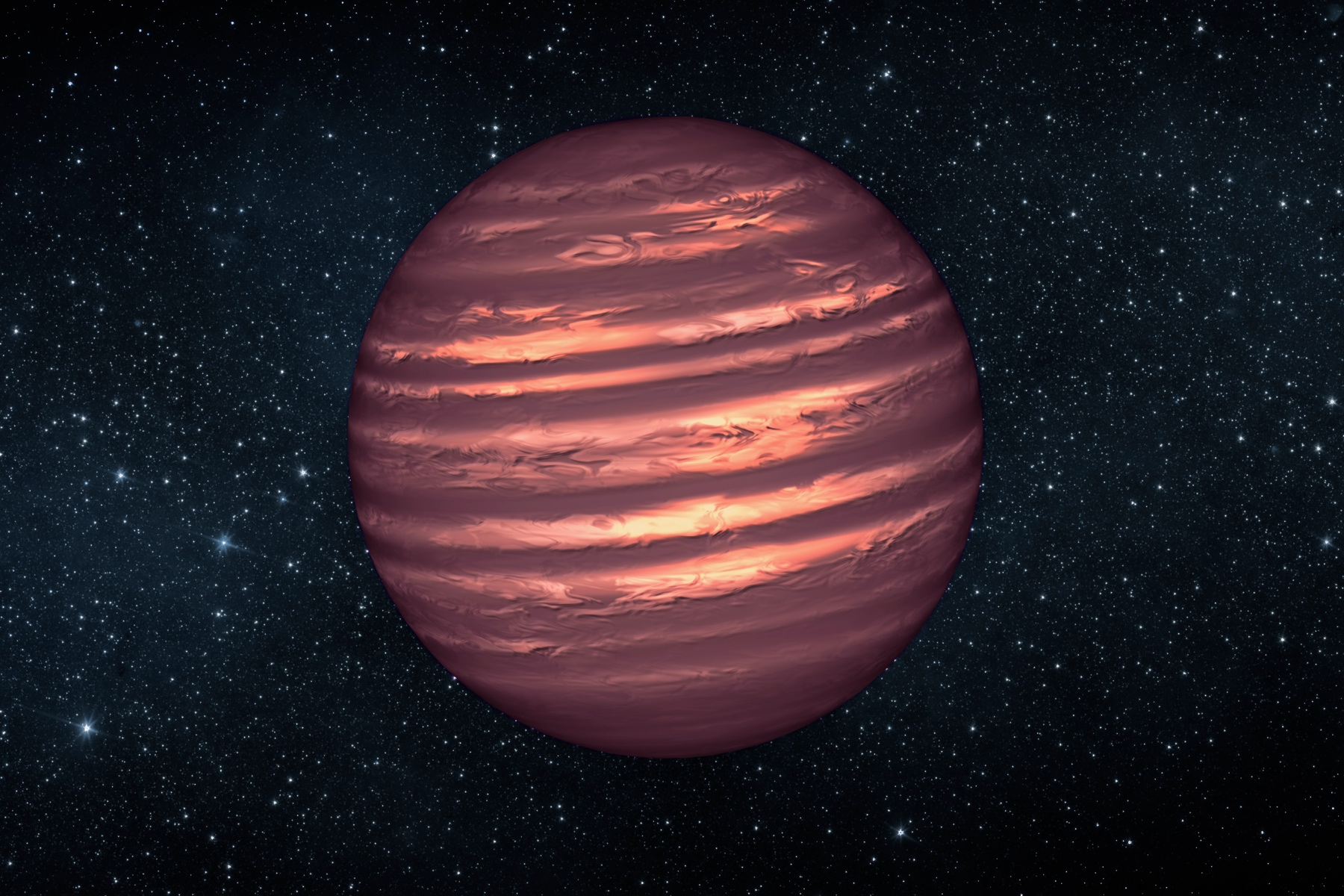 Brown dwarfs, the larger cousins of giant planets, undergo atmospheric changes from cloudy to cloudless as they age and cool. A team of astronomers led by Carnegie’s Jonathan Gagné measured for the first time the temperature at which this shift happens in young brown dwarfs. Their findings, published by The Astrophysical Journal Letters, may help them better understand how gas giant planets like our own Solar System’s Jupiter evolved.

Brown dwarfs are too small to sustain the hydrogen fusion process that fuels stars and allows them to remain hot and bright for a long time. After formation, brown dwarfs slowly cool down and contract over time—at some point shifting from heavily cloud covered to having completely clear skies.

Because they are freely floating in space, the atmospheric properties of brown dwarfs are much easier to study than the atmospheres of exoplanets, where the light of a central star can be completely overwhelming.

In this paper, Gagné and his colleagues—Katelyn Allers of Bucknell University; Christopher Theissen of University of California San Diego; Jacqueline Faherty and Daniella Bardalez Gagliuffi of the American Museum of Natural History, and Étienne Artigau of Institute for Research on Exoplanets, Université de Montréal—focused on an unusually red brown dwarf called 2MASS J13243553+6358281, which they were able to determine is one of the nearest known planetary mass objects to our Solar System.

The redness of this object had previously been suggested to indicate that it was actually a binary system, but the research team’s findings indicate that it is a single free floating planetary mass object.

They confirmed that it is part of a group of roughly 80 stars of similar ages and compositions drifting together through space, called the AB Doradus moving group, which revealed that it is about 150 million years old.

By knowing the object’s age and measuring its luminosity, the team could determine its likely radius, mass, and, most-importantly its temperature.

They could then compare its temperature to that of another previously studied brown dwarf in the same moving group—one that was still cloudy while 2MASS J1324+6358 was already cloudless. This allowed them to figure out the temperature at which the cloudy to cloudless transition happens.

“We were able to constrain the point in the cool-down process at which brown dwarfs like 2MASS J13243553+6358281 transition from cloudy to cloud-free,” explained Gagné

“Because brown dwarfs like this one are so analogous to gas giant planets, this information could help us understand some of the evolutionary processes that occurred right here in our own Solar System’s history,” Gagné added.

This research made use of data products from the Two Micron All Sky Survey (2MASS), which is a joint project of the University of Massachusetts and the Infrared Processing and Analysis Center (IPAC)/California Institute of Technology (Caltech), funded by the National Aeronautics and Space Administration (NASA) and the National Science Foundation; and data products from the Wide-field Infrared Survey Explorer (WISE), which is a joint project of the University of California, Los Angeles, and the Jet Propulsion Laboratory (JPL)/Caltech, funded by NASA. Based on observations obtained at the Gemini Observatory (science program number GN2017B-FT-21) acquired through the Gemini Observatory Archive, which is operated by the Association of Universities for Research in Astronomy, Inc., under a cooperative agreement with the NSF on behalf of the Gemini partnership: the National Science Foundation (United States), the National Research Council (Canada), CONICYT (Chile), Ministerio de Ciencia, Tecnologia e Innovacion Productiva (Argentina), and Ministerio da Ciencia, Tecnologia e Inova¸cao (Brazil).

The Carnegie Institution for Science (carnegiescience.edu) is a private, nonprofit organization headquartered in Washington, D.C., with six research departments throughout the U.S. Since its founding in 1902, the Carnegie Institution has been a pioneering force in basic scientific research. Carnegie scientists are leaders in plant biology, developmental biology, astronomy, materials science, global ecology, and Earth and planetary science.