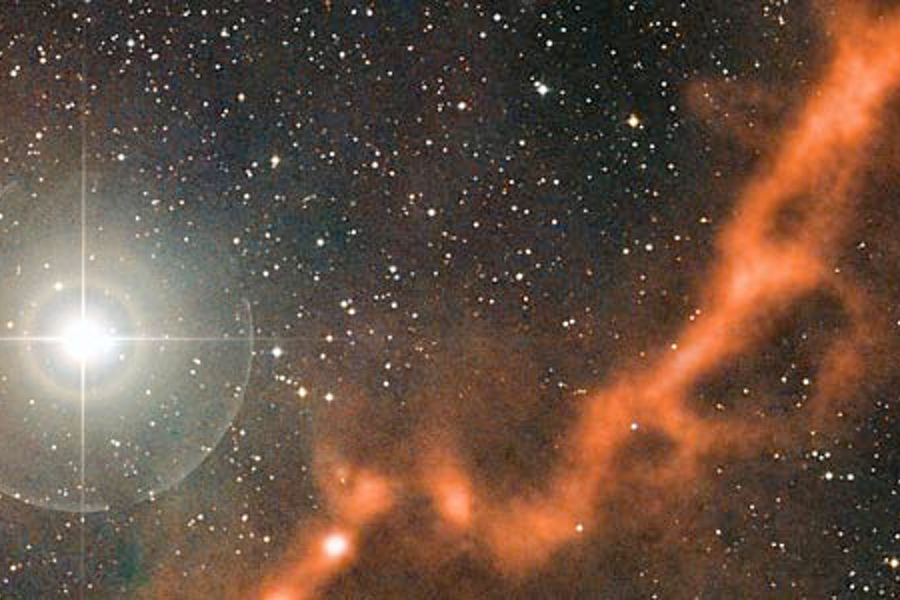 Formation of stars and their planets in the Taurus nursery as seen at millimeter wavelengths by the APEX telescope in Chile. (Credit: ESO/APEX)

Although first detected 20 years ago, hot Jupiters are still enigmatic bodies. These celestial objects are giant Jupiter-like exoplanets that orbit 20 times closer to their host stars than the Earth does to the Sun. Using the ESPaDOnS spectro-polarimeter on the 3.6m Canada-France-Hawaii Telescope (CFHT) atop Mauna Kea, a dormant volcano on the big island of Hawaii, an international team of astronomers led by Dr J.-F. Donati secured preliminary evidence that hot Jupiters can be generated in as little as a few million years – a timescale equivalent to one week if the 10-billion-year-lifetime of a planetary system were scaled down to a human life. This discovery, published in the Monthly Notices of the Royal Astronomical Society (MNRAS), will help us better understand how planetary systems like (or unlike) the solar system form and evolve into maturity.

In our solar system, rocky planets like the Earth or Mars are found near the Sun whereas giant planets like Jupiter and Saturn orbit much further out. « Hence the surprise in 1995 when Michel Mayor and Didier Queloz first unveiled a giant planet sitting very close to its host star » says Dr Claire Moutou, CNRS astronomer at CFHT and co-author of this new study. Since then, astronomers demonstrated that such planets must form in the outer regions of the protoplanetary disc – the matrix from which both the central star and surrounding planets are born – then migrate inwards and yet avoid falling into their host star. This could happen either very early in their lives, when still embedded within their primordial disc. Or much later, once multiple planets are formed and mutually interact in a rather unstable choreography – with some being pushed inwards at the immediate vicinity of their stars.

An international team of astronomers led by Dr J.-F. Donati just secured preliminary evidence supporting the first of these two scenarios. Using the instrument ESPaDOnS, a spectropolarimeter built by IRAP / OMP for the CFHT, they looked at newly-born stars in the Taurus stellar nursery about 450 light-years away from us. They showed that the latest baby star they scrutinized, nicknamed V830 Tau, exhibits signatures that closely resemble those caused by a 1.4 Jupiter-mass planet orbiting 15 times closer to its host star than the Earth does to the Sun. This discovery, published in MNRAS, provides preliminary evidence that hot Jupiters may be extremely young and far more frequent around very young stars than around mature Sun-like stars.

Although potentially very informative about planet formation, young stars are extremely challenging to observe. « Being enormously active and strongly magnetic, baby stars are covered with huge spots hundreds of times wider than those of our Sun, which generate perturbations in their spectra much larger than those caused by orbiting planets. As a result, their planets are quite tricky to detect, even in the case of hot Jupiters », outlines E. Hébrard, PhD student at IRAP / OMP and co-author of the study. To address this issue, the team initiated the MaTYSSE survey aimed at mapping the surfaces of baby stars and at looking for the potential presence of hot Jupiters.

« By monitoring these stars and using tomographic techniques inspired from medical imaging, we can unveil how dark and bright features are distributed across their surfaces, and how their magnetic fields expand into space. This modelling allows us to compensate for the perturbations that spots and fields generate in the spectra of young stars, and thus to regain the power of diagnosing the presence of close-in giant planets », explains Dr G. Hussain, co-author of the study. In the case of V830 Tau, the authors accurately modelled the surface field and spots in order to clean out their polluting effects, enabling them to discover the much weaker signal that hints at the presence of a giant planet. Although more data are required for a definite validation, this promising first result clearly demonstrates that the technique the team devised is powerful enough to solve the puzzling question of how hot Jupiters form.

« SPIRou, the new instrument currently built for CFHT by our team and scheduled for first light in 2017, will offer vastly superior performances thanks to its operation at near infrared wavelengths, at which young stars are far brighter, and will allow us to address this long-standing problem with unprecedented accuracy », Dr JF Donati adds.

CNRS, Université de Toulouse, Université de Montpellier and Laboratoire d’Astrophysique de Marseille in France, CFHT in Hawaii, University of St Andrews in the UK, CAUP in Portugal,  UMI-FCA in Chile and finally The Institut for Research on Exoplanets of Université de Montréal   are also participating to this press release.