Hot and dry: SPIRou reveals the atmosphere of hot Jupiter Tau Boötis b 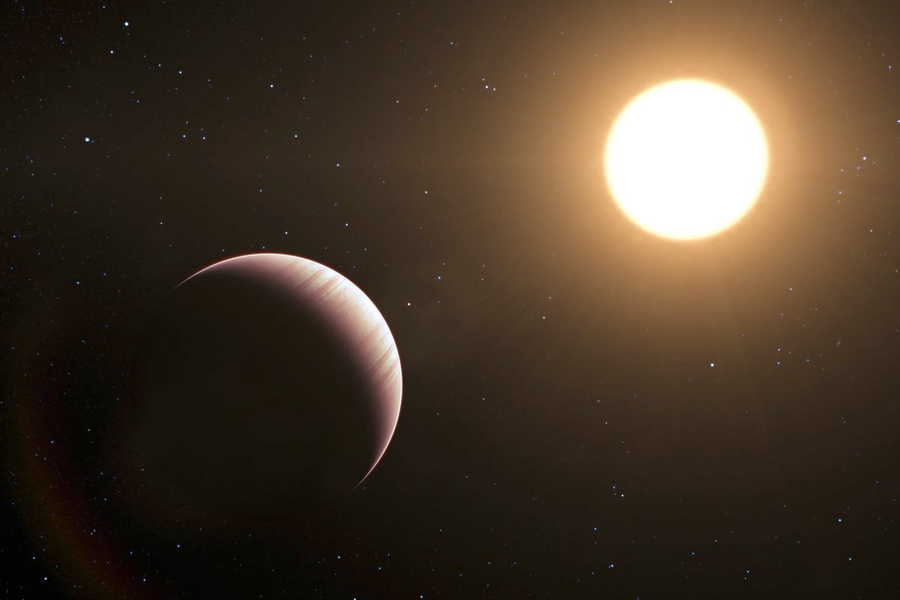 Artistic representation of the exoplanet Tau Boötis b and its host star. (Credit: ESO/L. Calçada)

Measuring the composition of the atmosphere of the hot Jupiter Tau Boötis b more precisely than ever, an iREx-led team of astronomers provides a better understanding of giant exoplanets.

Using the SPIRou spectropolarimeter on the Canada-France-Hawaii Telescope in Hawaii, a team led by Stefan Pelletier, a PhD student at Université de Montréal’s Institute for Research on Exoplanets (iREx), studied the atmosphere of the gas giant exoplanet Tau Boötis b, a scorching hot world that takes a mere three days to orbit its host star.

Their detailed analysis, presented in a paper published today in the Astronomical Journal, shows that the atmosphere of the gaseous planet contains carbon monoxide, as expected, but surprisingly no water, a molecule that was thought to be prevalent and should have been easily detectable with SPIRou.

Tau Boötis b is a planet that is 6.24 times more massive than Jupiter and eight times closer to its parent star than Mercury is to the Sun. Located only 51 light-years from Earth and 40 per cent more massive than the Sun, its star, Tau Boötis, is one of the brightest known planet-bearing stars, and is visible to the naked eye in the Boötes constellation.

Tau Boötis b was one of the first exoplanets ever discovered, in 1996, thanks to the radial velocity method, which detects the slight back-and-forth motion of a star generated by the gravitational tug of its planet. Its atmosphere had been studied a handful of times before, but never with an instrument as powerful as SPIRou to reveal  its molecular content.

Assuming Tau Boötis b formed in a protoplanetary disk with a composition similar to that of our Solar System, models show that water vapour should be present in large quantities in its atmosphere. It should thus have been easy to detect with an instrument such as SPIRou.

“We expected a strong detection of water, with maybe a little carbon monoxide,” explained Pelletier. “We were, however, surprised to find the opposite: carbon monoxide, but no water.”

The team worked hard to make sure the results could not be attributed to problems with the instrument or the analysis of the data.

“Once we convinced ourselves the content of water was indeed much lower than expected on Tau Boötis b, we were able to start searching for formation mechanisms that could explain this,” said Pelletier.

“Hot Jupiters like Tau Boötis b offer an unprecedented opportunity to probe giant planet formation”, said co-author Björn Benneke, an astrophysics professor and  Pelletier’s PhD supervisor at UdeM. “The composition of the planet gives clues as to where and how this giant planet formed.”

The key to revealing the formation location and mechanism of giant planets is imprinted in their molecular atmospheric composition. The extreme temperature of hot Jupiters allows most molecules in their atmospheres to be in gaseous form, and therefore detectable with current instruments. Astronomers can thus precisely measure the content of their atmospheres.

“In our Solar System, Jupiter and Saturn are really cold,” said Benneke. “Some molecules such as water are frozen and hidden deep in their atmospheres; thus, we have a very poor knowledge of their abundance. Studying hot Jupiters provides a way to better understand our own giant planets. The low amount of water on Tau Boötis b could mean that our own Jupiter is also drier than we had previously thought.”

Tau Boötis b is one of the first planets studied with the new SPIRou instrument since it was recently put into service at the Canada-France-Hawaii Telescope. This instrument was developed by researchers from several scientific institutions including UdeM.

“This spectropolarimeter can analyze the planet’s thermal light — the light emitted by the planet itself — in an unprecedentedly large range of colours, and with a resolution that allows for the identification of many molecules at once: water, carbon monoxide, methane, etc.” said co-author and iREx researcher Neil Cook, an expert on the SPIRou instrument.
The team spent 20 hours observing the exoplanet with SPIRou between April 2019 and June 2020.

“We measured the abundance of all major molecules that contain either carbon or oxygen,” said Pelletier. “Since they are the two most abundant elements in the universe, after hydrogen and helium, that gives us a very complete picture of the content of the atmosphere.”

ike most planets, Tau Boötis b does not pass in front of its star as it orbits around it, from Earth’s point of view. However, the study of exoplanet atmospheres has mostly been limited to “transiting” planets – those that cause periodic dips in the light of their star when they obscure part of their light.

“It is the first time that we get such precise measurements on the atmospheric composition of a non-transiting exoplanet,” said PhD student Caroline Piaulet, a co-author of the study.

“This work opens the door to studying in detail the atmospheres of a large number of exoplanets, even those that do not transit their star.”

A composition similar to Jupiter

Through their analysis, Pelletier and his colleagues were able to conclude that Tau Boötis b’s atmospheric composition has roughly five times as much carbon as that found in the Sun, quantities similar to that measured for Jupiter.

This may be a suggest that hot Jupiters could form much further from their host star, at distances that are similar to the giant planets in our Solar System, and have simply experienced a different evolution, which included a migration towards the star.
“According to what we found for Tau Boötis b, it would seem that, at least composition-wise, hot Jupiters may not be so different from our own Solar System giant planets after all,” concluded Pelletier.

“Where is the water? Jupiter-like C/H ratio but strong H2O depletion found on Tau Boötis b using SPIRou,” by Stefan Pelletier et al., was published July 28th, 2021 in the Astronomical Journal.